For this generation of Silverado, Chevy is mining its history and adding elements from previous generations of trucks 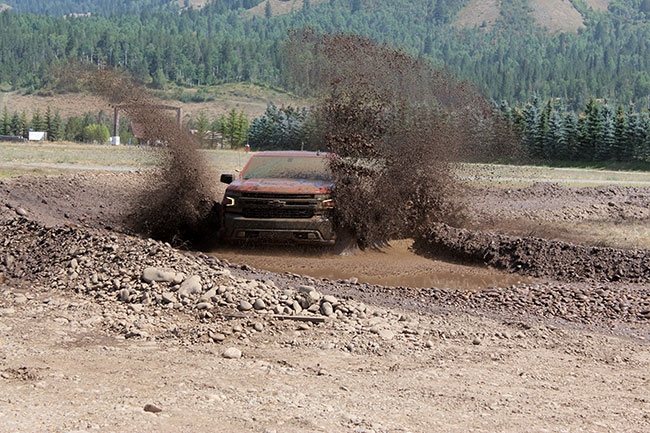 Trucks, currently, have never been more important to a manufacturer’s bottom line. Not only because they are selling in ever increasing numbers but because there just doesn’t appear to be a price ceiling.

Customers keep loading up new pickups with luxuries that only a few years ago were found only in sedans. It’s this hunger for constantly increasing content that pushes prices up as these upmarket extras quickly add up; and of course this is where builders earn the most money.

Ford knows this full well. They currently offer nine distinct trim packages and an extensive list of options. So, each year in this pickup war Chevrolet responds to Ford’s increasing number of trim levels with their own increase in luxury, accessories, special editions and personalization. This is the current state of the heated pickup market and it shows no sign of cooling down.

For 2019 that’s why we not only have an all-new generation of Silverado (the fourth since 1999) but also, simply put, more of everything. The new Silverado now offers eight trim levels, six different engine and transmission combinations – and for the first time – a new Duramax 3.0L turbo-diesel. These trim packages not only offer groups of conveniences but they also cover the very necessary work truck (WT) market right up to the opulent High Country. Yet within each trim level customers still have ample options when it comes to custom building the truck they need. Cabs, box lengths, powertrains, gearing and sundry equipment – Chevy does not believe in one-size-fits-all.

Chevrolet has now been building trucks for 100 years – for this generation of Silverado, Chevy is mining its history and adding elements from previous generations of trucks. The notable one is the “Chevrolet” name stamped on the tailgate that harks back to 50’s and 60’s. The centre grille mounted bowtie is also iconic; however the new look is anything but rounded as the designs of previous trucks. This new body is square, tall and slab-sided, offering a powerful profile. Sitting on up to 33-inch tires just amplifies that impression.

Though this next-gen Silverado is larger than its predecessor (1.2-inches wider, 1.5-inches taller, 1.7-inches longer, with 3.9-inches added to the wheelbase) it is lighter by some 450 lb. A mixed materials approach to construction is the reason for this. Strategic use of aluminum and more hi-strength steel have lowered the weight; yet the frame is actually 10 per cent more rigid than the outgoing model.

We all know that the cargo box on the truck is what makes it a pickup – a feature that’s been the same from day one. It’s also the feature which changes the least generation to generation; but not this time. Chevy has spent time and money on the business end of this new Silverado firstly by increasing the cargo volume to best-in-class.

By widening the inner box walls to mimic the outer body panels they have increased the available space by as much as 20 per cent. This space also boasts 12 fixed tie-down points with a sheer force of 500 lb. each (twice the previous rating). There are also nine moveable tiedowns. To see what you‘re doing in the box it has task lighting and a 120V power outlet in the sidewall. Getting in and out of the box is also easier now with even larger cut-outs in the CornerStep bumper and large stake-hole handholds.

Below it all is the rolled steel bed floor which is now using an even higher grade of high-strength steel. Silverado also offers four versions of its tailgate. A standard, manual unsprung gate; a manual gate with lift-assist; a power locking version and even a power up and down gate with automatic release. Each of these is lockable. Making use of this additional space in the new bed are available storage bins that fit over the wheel wells which still leave the floor clear.

Multiple Powertrains are another feature that gives customers necessary choices and Chevy has some veterans and also some very new mechanicals in its 2019 lineup. I’ve already mentioned the coming diesel; however that isn’t till late in the year and details are being kept under wraps till then.

Gas engines include updated versions of the 5.3L and 6.2L V8s along with a all new 2.7L turbo engine that is now the base engine on the high-volume Silverado LT and RST. It offers 22 per cent more torque and greater fuel efficiency that the 4.3L V6. However, this V6 and the 5.3L V8 will still have the chief options on the entry-level and WT models. An exciting development in fuel efficiency for this new gen is a technology called Dynamic Fuel Management. Unlike the current Active Fuel Management (which runs as either an 8-cylinder or 4-cylinder), the new DFM can fire on as few as two cylinders.

Studies have shown that under normal usage a DFM-equipped engine was running on less than eight cylinders 60 per cent of the time. This translates to a nine per cent improvement in fuel efficiency over the old AFM system.

The stretched body on the new Silverado translates to more room inside the cab – starting with three added inches of rear-seat legroom for a total of 43.4-inches; which almost equals the 44.5 inches available to the front seat driver and passenger. The other benefit of more space is storage and Silverado has built new features into the second row starting with two 10L bins integrated into the seat backs. Under the rear seat there is a moulded, compartmentalized, 24L storage tray. In the front, by going with a traditional gear shift lever, the entire centre console/armrest is a massive storage space organized into several transforming spaces that will accommodate pretty much anything your daily life requires – along with all the electrical inputs and outlets necessary to run them. The interior itself is better seen, then described. However, it is, without a doubt, the best interior Chevy has ever put forward.

For transmissions there are three versions. Each is coupled to the appropriate engine, as needed. At the lower end (power and price-wise) is the automatic six-speed. The new base 2.7L turbo pushes power through an eight-speed gearbox; it also is the main choice for the 5.3L V8. The new ten-speed is found on the 6.2L V8 and will power the coming 3.0L turbo-diesel.

Most truck owners know, and certainly sense, that each generation of 1500-series pickup is becoming more and more towing capable. This is regardless of brand. They tow more weight, handle larger trailers and, thankfully, the builders are adding the tech and safety features needed to handle these larger loads safely. It’s actually funny that many of us still refer to this size of truck as “half-tons” – we left that territory long ago.

The new numbers for the 2019 Silverado are 12,200 lb. – towing (max), up 400 lb. over 2018. New maximum payload has increase 340 lb. to a hefty 2,500 lb. Now to handle these new weights Chevy has added some very welcome and slick towing technologies. First, up to four cameras offer different views while hitching. This includes hitch guidance lines on the centre display and a choice of views. After the driver has lined up the hitch and shifted to park the parking brake sets automatically – avoiding that slight roll that wrecks the alignment. An optional feature is a trailer tire temp and pressure monitor. An industry first, this system allows the driver to keep an eye on the trailer tires. A new trailer light check system runs the lights in sequence as you watch. This feature can be activated from inside the truck or via a MYChevrolet Trailering App on your Smartphone.