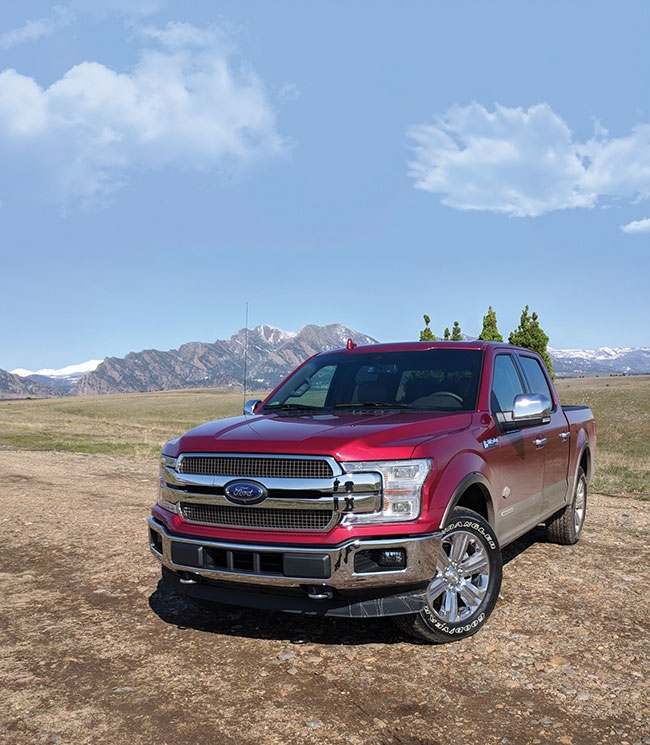 Quiet. That word describes, perfectly, the new 3.0L Power Stroke diesel just introduced by Ford. I’ve driven it, stood beside it while idling and floored it uphill while towing – it is eerily quiet. This trait, plus the power it makes, now available in the F-150, makes this introduction a true milestone in the history of the F-series. And, as of today, you can order this diesel engine in your new half-ton – a first in the 70-year life of the brand.

If you do, here is what you’ll be getting.

This new engine (under development for several years now) uses V6 graphite/iron block architecture; a variable geometry turbocharger; 29,000 psi injection fuel rail and aluminum pistons. It displaces 3.0L and makes 250 hp at 3,250 rpm and 440-lb.-ft. of torque at 1,750 rpm. It does use DEF (diesel exhaust fluid) along with a particulate filter and high-pressure cooled exhaust gas recirculation technology to reduce emissions.

Ford’s SelectShift 10-speed automatic transmission is the other half of this new powertrain. It’s already in use with several of Ford’s engines and has been getting good reviews. This non-sequential transmission is also part of the fuel economy improvements that Ford is seeking. This effort also includes the auto stop/start feature that is now standard on all F-150’s; gas or diesel.

Ford is claiming a fuel consumption number of 10.8L/100km city and 8.0L/100km on the highway for the 3.0L. So, while these numbers are light, the capabilities of this diesel-equipped truck won’t be. To start with, the published torque number is currently best-in-class as is the towing (up to 11,400 lb.) and the payload (up to 2,020 lb.). With this new Power Stroke in the stable the F-150 now offers customers an unequalled choice of six engines.

My recent first drive of this diesel was as impressive as the numbers suggest. I found it strong, efficient and very well paired with the SelectShift transmission. I towed with it and drove it with payload – the quiet, as I already mentioned, was impressive. But then so was the vibration and harshness – as there wasn’t any. The torque comes on as soon as you start to roll and pulls strong and straight through the gears. The strength here is evident, not just from the feel, but also from how the transmission handles the power. With 10 gears you might expect the tranny to hunt or drop several gears when the accelerator is mashed. Not so. Even during floorboard acceleration it drops at most two gears, most often just one – it’s that strong. As for backpressure, it too is even, quiet and strong; holding just about any gear while coasting down long grades. As for the fuel numbers, I beat them. Driven gently this engine can easily best the numbers that Ford is claiming.

Overall, this introduction and my first drive of it, was a smile-inducing success. I suspect that the truck buying public will also feel the same way about this newest F-150 engine option.

So, while Ford’s new small diesel is certainly welcome, it does beg the question – what took them so long? Watchers of the brand (like me) have been pestering Ford about bringing in a small diesel for years. Normally, in trucks, they lead in the trends. First with an aluminum body; first with a 10-speed transmission; first with a flat rear floor; first with an integrated tailgate step; first with a factory trailer brake controller; and the list goes on.

Yet in this one area they let Ram, GM, and even Nissan, do it first. Those companies have been offering small displacement diesels in 1500-series trucks for several years now – and doing very well with them.

The F-series sold a total of 896,764 units in 2017 (everywhere). It’s the single most popular pickup truck in Canada for over 50 consecutive years. Looking at just these numbers and even without knowing much about the auto business you can easily see trucks are Ford’s bread, butter and dessert. So, why take so long to bring the small diesel to market?

My personal opinion – EcoBoost. After its introduction in 2011, Ford repeatedly said that the “future” was all about EcoBoost. They felt that this high compression, turbo heavy, gas engine technology would set them apart. Well, yes, EcoBoost has its place, but as they have now finally acknowledged so does diesel.

On the other hand, this late arrival may have more to do with the long journey this engine has had to make. For starters it’s built in England and also shares a design history with Jaguar/Land Rover.

Ford’s Dagenham plant, outside London, has produced over 10 million cars and 37,000,000 engines since Edsel Ford turned the first spade of dirt beginning its construction back in 1929.

Today its primary business is building engines, which includes a contract with Jaguar/Land Rover (once owned by Ford but sold to Tata Motors in 2008). This 3.0L F-150 diesel started out as a clean-sheet design that would power vehicles from both companies, then owners changed and times changed. In the end, speculation aside, it’s a story that ends well. This new engine is impressive.

If, like me, you’ve been waiting for Ford to join the new age of small diesel you may well decide to head down to your dealer and order one. However, as the rollout begins, the new diesel will only be available as part of the more expense trim packages.

Customers can choose this engine option for 2018 F-150 Lariat, King Ranch and Platinum edition SuperCrew trucks with either a 5.5-foot or 6.5-foot bed configuration, and SuperCab trucks with a 6.5-foot bed. Pricing, with this restriction in mind, will then start at $51,449.00 and walk up through $77,979.00

Now for Fleet customers, 3.0L Power Stroke diesel engines will be available on all F-150 trim levels with SuperCrew 5.5-foot or 6.5-foot bed configurations and SuperCab trucks with a 6.5 foot bed. That means the entry price for Fleet will be $36,749.00