P.E.I. contractor’s success stems from its people and ability to adapt 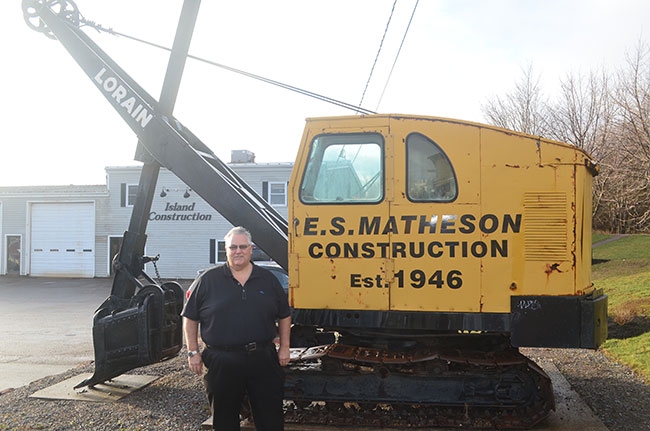 Ernest S. Matheson (Ernie) was a true entrepreneur, always adapting to his environment and circumstances. Shortly before The Second World War, Ernie started up his own trucking business, hauling whatever needed moving.

“He was working in the trucking business hauling gravel, molasses, potatoes, whatever he could get,” Ernie’s son, Steve, recalls during an interview with Rock to Road at his company’s Charlottetown headquarters.

When The Second World War started, Ernie signed up with the Air Force to work as a member of the military police (MP). Once the war ended and Ernie came home, he identified an opportunity within P.E.I.’s construction sector and decided to start up another business.

“My father, after he came out of the Air Force, ordered his first piece of equipment (a Lorain Crane) and used it to dig out the basement for the Charlottetown Hospital [in 1947],” Steve says.

In 1953, along with his brother-in-law, Stewart, Ernie formed another company, Matheson & MacMillan Ltd. Unfortunately, just two years later the company suffered a major loss with the loss of Ernie’s brother-in-law and business partner. Despite the personal and business loss, Ernie continued on with the support of a dedicated staff and the company prospered.

In 1961 Ernie purchased controlling interest in Island Construction Ltd., which was founded in 1944 by entrepreneurs from Toronto. Matheson & MacMillan Ltd. continued to operate alongside Island Construction. In 1978, the firm purchased Mariner Towing, a tug and barge operation; and Morrison & MacRae, which was heavily involved in the road building, sewer and water, and wharf construction sectors.

“Like many small companies, the early days saw most of the office work done at the kitchen table, making it all a family-owned business,” says Steve, who, along with three siblings were by his father’s side for much of the growth of the business. “I started shovelling asphalt at 14 years old. You didn’t get to sit around on the couch at our house.”

Although Steve took over the company as president in 1983, when Ernie decided to step back a little, he still regularly talked business with his father. And Ernie never really retired, always being very interested and involved in all the company was doing. Over the years, the Matheson Group of Companies has been involved in a variety of high-profile projects across the province. In addition to the company’s first big contract with the Charlottetown Hospital, it has done work on both runways at the Charlottetown Airport; built the approach roads for the Hillsborough Bridge, the highway bypass project from New Haven to Bonshaw, the North River Causeway, and the Confederation Bridge. Large projects continue to this day with the company currently working on the TCH Cornwall Bypass contract with the province.

Staying agile
Like all successful long-term companies, the Group has remained agile and adaptable to changing market conditions. Some 25 years ago, the Group restructured to separate its production and construction operations and the company now performs most of its work under the banner of Island Construction. Other brands operate behind the scenes in a support role. In a smaller market like Charlottetown, it pays to be agile and take on a wide variety of work as the opportunities present themselves, and that is something Steve has stressed with his staff at Island Construction.

“Whether it’s patching driveways or paving parking lots, highways or 10 kilometres of road, there’s no turning down work. It’s just a form of vertical integration,” Steve says. “If we’re patching someone’s driveway today, they’ll remember us for when they need a new driveway. And that philosophy has been implanted for all types of projects that make their way to our doorsteps.”

In addition to road and driveway projects, Island Construction is always searching for other types of work to keep its portfolio as diverse as possible, including aggregates hauling.

Innovation
When it came to the latest techniques and technologies, Ernie always stayed abreast of industry developments and endeavored to incorporate these into his operations when it made sense.

“He was never scared to try any of the new stuff,” Steve says. “We have always been early adopters of new developments in construction technology that benefits P.E.I. I think one of the key factors in the success of our business has always been in re-investing in new equipment and processes.”

One example of the company’s willingness to invest in new technologies was its purchase of the first asphalt plant with recycling capabilities to be introduced to P.E.I. back in 1980, according to Steve.

“As always, Ernie was a little ahead of the curve as it was several years before the technology became commonplace in P.E.I.,” he says.

In 1997 the company significantly upgraded its asphalt recycling business with the purchase of a Gencor 300 skidded asphalt plant, and later, a Gencor 200 portable asphalt plant.

“The Gencor burners are an industry leader in efficiency and quality and, coupled with its baghouse technology, has enabled the Matheson Group to maintain its position as a preeminent, environmentally conscious producer in P.E.I.,” says David Abbott, comptroller for Island Construction.

Island Construction was also the first P.E.I.-based contractor to bring Bomag MPH 100 mixers to the province; Wirtgen Group W2200 grinders to the province, for a section of the Charlottetown Airport the company was working on; and the first to use live-floor trailers in its operations. P.E.I.’s own Trout River Trailers also saw the potential of this technology that the Mathesons saw and is now a world leader in producing these trailers.

A company priority is to regularly upgrade its heavy equipment to ensure its fleet is running at an optimal capacity.

“I’d rather get the first few thousand hours of a machine than the last ones,” Steve says.

Industry involvement
Island Construction has always been very active with various industry associations over the years. In earlier years, the company was very active in TRIP Canada, a grassroots movement to help get industry concerns regarding infrastructure deficits heard by people across the country.

Island Construction is also active with the Canadian Construction Association where Steve represented P.E.I. on the Board of Directors and its executive committee.

Powered by its people
Island Construction currently employs about 125 people in peak season. The company, like many across the country, occasionally struggles to find enough skilled workers to fulfill its contracts. That said, one major advantage that Island Construction has going for it is that Steve isn’t the only person following in their parent’s footsteps, working hard to ensure the company’s success through multiple generations.

“We have a lot of staff that are second- and third-generation,” Steve  says. “We’ve had employees that were here 50 years. One family has been with the company for 91 years total, between the father, son and grandfather… this business doesn’t operate because of one man or family.”

As for the Matheson family, the company has been preparing its own succession plans for when the time comes that Steve, who is currently 62, decides to retire. His children, Laura and Steven, have been working hard to ensure they know all the ins and outs of the family business.

“The company is in good hands to lead it into a prosperous future,” Steve says. “So it lives on for another generation.”