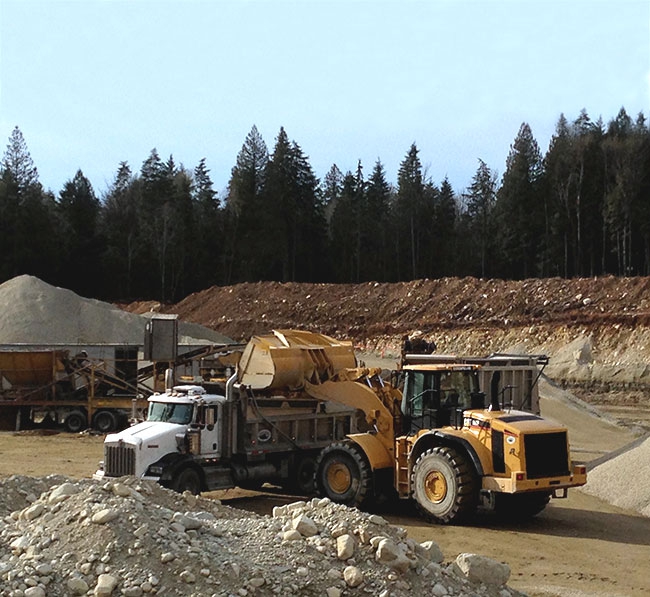 Mission Ridge Aggregates, which produces and supplies sand and gravel to companies in southwestern British Columbia, operates in a tough market.

“The aggregate industry is very competitive,” said company founder, president and CEO Ted Craiggs. “We have to edge our way up the hill every day.”

Despite the competitive pressures, Mission Ridge has become very successful since it was founded more than 25 years ago. The company has several aggregate properties, 2,000 customers, 25 staff, as well as a fleet of 100 independent trucking subcontractors at its service.

One of the reasons for Mission Ridge’s success is that it has six loyal and dedicated family members in the company.

Before founding Mission Ridge Aggregates, Craiggs played professional football for the Canadian Football League BC Lions. He is also the former special teams coach for the Lions, past president of Football BC, a director of Football Canada and BC provincial head coach.

“I started the company in 1988,” Craiggs said. “Business was slow in the beginning, but it picked up quickly. In the first month of operation, we generated only $35,000 in sales.  But by the end of our first year we had chalked up sales of approximately $5 million.”

Craiggs says Mission Ridge is involved in “the extraction, manufacturing and distribution of sand, gravel, concrete, asphalt, quarry and limestone aggregates-based materials that are used in the construction industry.”

The company’s mission statement is “to provide a superior level of customer service and satisfaction while consistently producing and distributing high-quality aggregate-based materials to our customers.

“We C.A.R.E. (Customers Are Really Everything), so much so that we are committed to the continued monitoring and improvement of our products and services provided to our customers.”

The company, whose headquarters are in Maple Ridge, has customers all over  southwestern B.C.

“We distribute aggregate-based materials to customers in Vancouver, the Fraser Valley, the Lower Mainland and the Sea-to-Sky Highway [Highway 99, which runs north-south from the U.S. border to Lillooet, B.C.],” Craiggs said.

Craiggs says Mission Ridge’s many customers come in all types and sizes. They include building, road building, road maintenance and excavation contractors; asphalt and concrete producers; and land developers.

“We’re a diversified business and we want to keep it like that,” Craiggs said. “That way we’re less vulnerable to the loss of a customer.”

Over the years Mission Ridge has provided aggregate to many high-profile infrastructure projects in southwestern B.C. One example is the Port Mann Bridge-Highway 1 Improvement Project, which upgraded the Lower Mainland’s busiest and most congested highway.

The project included building a new 10-lane Port Mann Bridge over the Fraser River, widening a 37-kilometre stretch of highway between Vancouver and Langley in the Fraser Valley, and replacing nine highway interchanges.

Another project to which Mission Ridge supplied aggregate is the Coast Meridian overpass, a four-lane, cable-stayed bridge over the Canadian Pacific Railway marshalling yard in the Vancouver suburb of Port Coquitlam. The new bridge is 25 metres wide and 580 metres long.

Mission Ridge supplied aggregate and trucking services on the project that widened B.C. Highway 7 on the 13-kilometre stretch between Mission, B.C. and Ruskin, B.C.

Known as Lougheed Highway for most of its length, Highway 7 is an alternative route to Highway 1 through the Lower Mainland. Highway 7 is on the northern bank of the Fraser River, and Highway 1 follows the southern bank.

The company’s main pit operation is located in Deroche, B.C., about 115 kilometres east of Vancouver.

“The Deroche operation has road access,” Craiggs said. “We also have other  gravel properties in central B.C. that can be developed. And we still have aggregate supply agreements with other producers in case we need to top up our own supplies.”

The Mission Ridge truck fleet is made up of tandem trucks, truck and pony trailers, four-axle truck and transfers, and side-dump B-trains. It features  Kenworth T800 trucks, with truck boxes and transfer trailers manufactured by K-Line Trailers.

In 2012, Mission Ridge and Leq’á:mel First Nation, which is located in Deroche, formed a joint venture to operate the Deroche pit operation.

Some 70 per cent of the pit’s staff come from the Leq’á:mel. The company provides full-time employment and on the job training to  band members in such areas as equipment operation, water testing, traffic control, landfill management and land development.

“The agreement establishes the commitment of both parties to the continued development of long-term sustainable social and economic growth and prosperity of the First Nation and the surrounding areas,” Craiggs said.

Although the company is well-established in southwestern B.C., Mission Ridge still hustles for business.

“We don’t spend a lot of money on advertising, because everybody in the region knows who we are,” Craiggs said. “But the company has a strong sales force and it really works hard.“

Craiggs says the company’s competitive edge is the high quality of its service.

“We are a 24/7 provider,” he said. “No matter where we are or what time the call comes in, we are ready to service our customers for immediate or emergency requirements. All calls go to me, Taylor and Tyson. And we have 24-hour dispatch.”

Craiggs says the company is facing two main challenges. One is a shortage of supply of aggregate.

“There is a shortage of gravel in southwestern B.C. because it is difficult to get new pits approved,” he said. “As local supplies are mined out or closed down, demand must be satisfied by alternate sources of supply.”

In the Greater Vancouver Regional District, old pits are running out, but no new pits have been opened for the last seven years.

Another challenge is stiff competition from other aggregate producers in the region.

“But we’re not interested in racing to the bottom,” he said. “There’s no long-term success in that race.  Like all aggregate producers, we need to take a proactive approach to managing our employees, and our operational and production costs.”