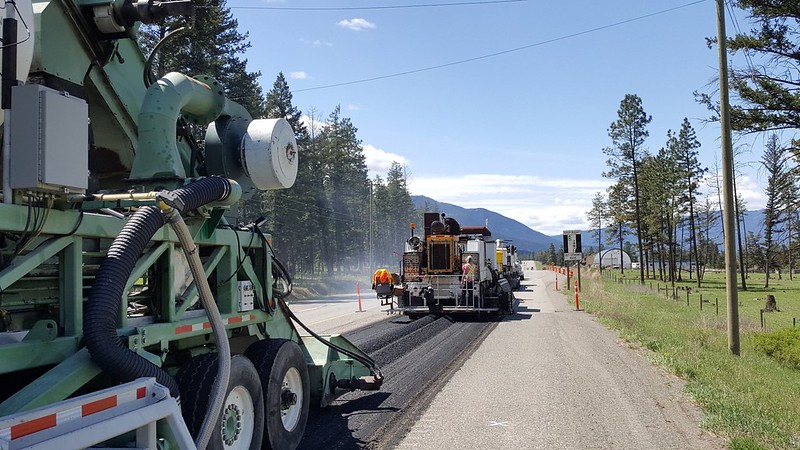 A resurfacing project on highways 6 and 97 near Vernon and Falkland is underway, one of several in the southern Interior that will cover more than 300 kilometres of highways and side roads in 2020.

“All these paving projects will make a big difference to residents as well as those who travel through the region,” said Claire Trevena, Minister of Transportation and Infrastructure. “Moving forward with highway improvement projects means we are providing jobs for British Columbians, but in all of these projects, safety comes first.”

B.C.’s provincial health officer (PHO) has directed construction employers to take all necessary precautions to minimize the risks of COVID-19 transmission and illness to themselves and their employees. This includes ensuring workers maintain physical distance with a minimum of two metres apart from each other, both in the course of their duties and during breaks. Anyone exhibiting COVID-19 like symptoms will be directed to self-isolate at home for at least 10 days.

Hot-in-place resurfacing is a made-in-B.C. process that involves repurposing the existing asphalt by heating, softening and blending it with a small amount of new asphalt before reapplying it to the road surface. This method extends the life of the surface, is faster, saves resources and lowers greenhouse gas emissions.

Other major resurfacing projects for the region this spring and summer include:

More than $85 million is being invested in highway and side road improvements in the southern Interior in 2020. The following projects make up the rest of what will be resurfaced in the region this year:

While highways and roads remain open, the PHO recommends people stay close to home and avoid any non-essential travel.

As these resurfacing projects are taking place, drivers can expect minor delays and, at times, single-lane alternating traffic. The ministry appreciates people’s patience during this resurfacing work. Drivers are reminded to obey construction zone speed limits and the direction of traffic control personnel.

Updates on delays and closures are available online: DriveBC.ca