Determining how clean your aggregate is 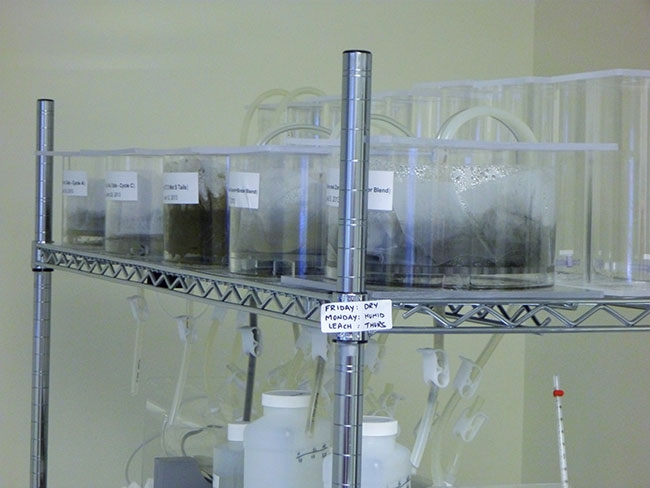 When talking about aggregate, the term “clean” is used to refer to material that is free of dirt, clay or organic material. These days (at least in British Columbia), the definition of clean can be extended to include material that does not generate acid or leach metals when exposed to rainfall.

Rock that generates acid has long been a concern of the mining industry, where sulphide minerals are frequently associated with metalliferous ore bodies. In simple terms, when metal sulphide minerals present in mined rock are exposed to air and water, chemical reactions occur resulting in the production of metal-rich, acidic water referred to as acid rock drainage (ARD). Alkaline mine drainage (i.e. water with a pH above 7.0) can also be a problem, although this phenomenon is mainly associated with coal or diamond mining). If ARD is allowed to enter fish habitat, then the effects upon aquatic life can be disastrous. Once rock starts generating ARD, the process can continue for decades or longer.

Quarried Rock
Thankfully, most quarries are not host to significant sulphide mineralogy (or they would probably be operating as mines). Nonetheless, discrete parts of a quarry deposit may still host sulphide minerals (typically iron sulphides) and hence there may be a risk of ARD. Even in the absence of sulphide minerals, rock may still pose environmental issues due to minerals dissolving when exposed to rainfall (a process referred to as metal leaching) resulting in elevated metal concentrations in runoff (but without the acidity associated with ARD).

If you are a quarry operator in B.C. and have no idea if your quarried rock may have issues with ARD or metal leaching – should you be concerned? In part, the answer depends on the quarried rock’s end-use. If you sell rock for use in Ministry of Transportation and Infrastructure (MOTI) road construction projects, then the answer is an emphatic “Yes!” In September 2013, MOTI substantially revised its guidelines for environmental rock testing requirements for all rock used in MOTI projects, when it issued Technical Circular TC-04/13. Technical Circular TC-04/13 describes the range of laboratory tests that must be carried out by a suitably qualified person, in order to assess the risk of ARD or metal leaching from quarried materials. A report detailing the test program results and interpretation by the qualified person must be provided to MOTI or quarried rock may be disqualified for use in MOTI projects.

If you own a quarry in B.C., but you do not sell rock products used in MOTI projects, or your quarry is located outside of the province – do you have nothing to worry about? That depends; if your quarried rock is used in a scenario where it is exposed to water and air and is located in proximity to aquatic habitat, and it turns out that there is an issue with ARD / metal leaching, then you may find that the ultimate liability for any subsequent remediation work rests with you. With even small remediation projects costing hundreds of thousands of dollars, this could be a situation where a little due diligence is justified.

Given the low mineralisation associated with typical quarry deposits, the likelihood of rock “failing” the tests is pretty low. However, if you get your rock tested and there is a problem – what then? The initial round of testing focuses on basic laboratory tests to assess the risk of ARD and metal leaching. If the results of these tests indicate there may be potential issues, then more detailed tests would be carried out to confirm the initial results. If the outlook still looks bad, then this would likely result in the need for classification of quarried rock after blasting to segregate material which may pose an environmental risk and/or a risk assessment of the use of quarried rock on a project by project basis. The revised testing guidelines have only been out for a short while, and hence the author has yet to hear of a situation where quarried rock has been classified as being unacceptable for use in MOTI projects and the resulting implications for individual quarry operations.

Road Construction
The MOTI rock testing requirements also apply to rock that will be blasted during road cut development which may end up being used as road fill. Road cuts will exist in perpetuity and hence issues associated with ARD or metal leaching from the cut faces can be problematic, as discussed in two case studies presented below.

ARD Case Study #1 – Coquihalla Highway, B.C.
A section of the Coquihalla Highway (HWY 97C) in southern B.C. has been affected by ARD generated from road cuts since highway construction was completed in the 1980s. This part of the highway runs through a provincially protected area which hosts Pennask Creek. Pennask Creek is home to an internationally significant rainbow trout population and is an important source of rainbow trout eggs for the provincial fish culture program. MOTI was subsequently successfully prosecuted under the Fisheries Act and pleaded guilty to two of the 10 charges laid.

Over the years, MOTI has spent time and effort in trying to rectify the ARD problem with limited success. In August 2014, MOTI initiated the tendering process to find a long-term solution to the problem at an anticipated cost likely in the region of tens of millions of dollars.

ARD Case Study #2 – I-99, Pittsburgh, Pa.
A second case study involving ARD and road cuts occurred during the construction of Interstate 99 (I-99) in Pennsylvania during 2003. Acid rock drainage was generated from exposed sulphidic sandstone in road cuts and from approximately 900,000 m<ss>3</ss> of cut rock used as road fill. A 24 km section of I-99 located in State College, approximately 200 km northeast of Pittsburgh was affected. Within a matter of months, the site was generating metal-rich ARD with a pH of less than 3 (pH comparable to vinegar). Road construction was halted as an investigation into the issue began. The problems on I-99 were compounded (as was the case on the Coquihalla Highway) by the fact that the site is located within an environmentally sensitive area, in this case the Buffalo Run watershed; a stream with pristine water quality. A decade and $50 million later, the remediation project is near completion and required the bulk excavation and secure storage of several hundred thousand tonnes of sulphidic fill, installation of complex engineered covers on road cut walls and construction of a water treatment plant.

Conclusions
The requirement to carry out due diligence to assess the environmental risks associated with quarried rock and road construction is now a formal requirement for all MOTI projects in B.C. For non-MOTI projects, or for road construction projects located in other Canadian jurisdictions there is no formal requirement for comparable assessments to be carried out – yet. Given the potential high cost of remediation when things go wrong, it can be argued that a little due diligence might be the way to go. Either that or double check the fine print of your liability insurance to make sure you are covered for environmental claims in the unlikely event that your quarried rock is found to be the cause of unacceptable environmental impacts.