Aggregates & Roadbuilding recently
had the opportunity to see a new portable tracked screen in a quarry
application where its ability to separate large sizes has boosted the
yield of saleable product. 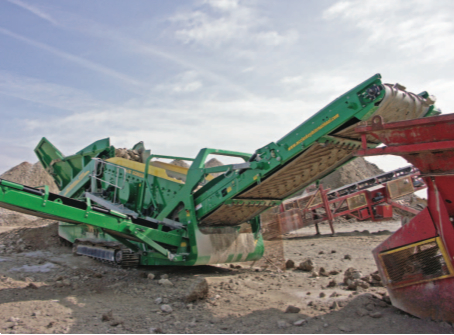 The production of a portable screen that will withstand the
punishment of large rock, boulders or demolition rubble
can be challenging for a screen manufacturer. Innumerable
times, the screen’s structure, media and conveyor belts are impacted
by loads from individual feed pieces weighing as much as 200 kg,
often without the cushioning effect provided by a bed of smaller sized
material. Such feed material is unforgiving of any weaknesses in the
screen’s design and construction and, given the chance, can cause rapid wear or even structural failure. Aggregates & Roadbuilding recently
had the opportunity to see a new portable tracked screen in a quarry
application where its ability to separate large sizes has boosted the
yield of saleable product.

At the Carmeuse North America Group operation near Ingersoll,
Ont., the extraction process begins with the removal a layer of over-
burden some 25 m deep. Overburden removal exposes weathered cap
rock which in turn overlies the valuable high calcium limestone deposit. The high silica content of the cap rock rules out its use in metal-lurgical applications, but it is in strong demand for construction applications such as decorative landscaping, retaining walls and erosion
control. Once the landscaping stone has been selected and sorted, the
remaining cap rock material is processed to produce other construction materials including gabion stone, rock ﬁll and granular base.

Gary Brown is president of Oxford Sand & Gravel Ltd, an area
aggregate supplier which has been processing both cap rock and
overburden for the owner. Feedstock for the McCloskey International
R155 High Energy Screener has included primary crusher run containing pieces up to 500 mm across as well as smaller size fractions down
to zero. At the time of the visit, the screen was separating this large
feed at 100 mm to make 500 mm x 100 mm gabion stone and 100
mm x 0, with the latter popular in industrial and commercial applications as roadbase or excavation ﬁ ll. Once screened, both products were
stockpiled by McCloskey 30 m long stackers. According to Brown,
the screen has proved efﬁcient and durable, maintaining an average
throughput rate of 225 tonnes/h on this product split. At other times,
the screen has made three products rather than two; 500 mm x 100
mm, 100 mm x 25 mm and 25 mm x 0, with the 100 mm x 25 mm
product used at a County of Oxford landﬁ ll site. The screen has also
been used in a much milder application at Ingersoll, extracting 50 mm
minus Granular B base, 50 mm x 100 mm landscape stone, and 100
mm plus sizes from sand and gravel lenses that are present within the
overburden.

The selective extraction of saleable material from both cap rock
and overburden delivers two principal beneﬁts for the quarry owner.
Firstly, the recovered product converts otherwise waste material into
an additional revenue stream and secondly, every tonne sold as product is one less tonne that has to be moved and utilised elsewhere in
an operation with little spare real estate.

In Brown’s view, the advantages of screen’s robust design more
than offset the resulting weight penalty and somewhat higher initial capital cost. For one thing, the design prevents the twisting and
distortion that can occur when more lightly built units are put into
severe applications such as this. Brown also makes some interesting observations on how the screen’s design and resulting material
ﬂ ow helps to reduce impact and wear. Most important perhaps, the
direction of travel of large material stays in line with the screen axis
throughout the screening process. At the feed end, the hopper is fed
from the rear, so that the material falling from the loader bucket
tends to roll towards the screen in parallel with the action of the feed-
er. Compare that to the side feed arrangement seen on most portable
screens and primary crushers. These feed arrangements turn the direction of material travel through ninety degrees, thereby increasing
both the hopper liner wear rate and the energy required to move the
material across the feeder.

The same principle applies at the discharge end of the screen. It
is no coincidence that the unit’s main product conveyor belt is in line
with the screen and receives the largest sized product while smaller
sizes are conveyed off the side. If instead, the main conveyor was set
at an angle to the screen, its belting would be working all the time
to change the direction of travel of heavy discharging material and
so wear more rapidly. This situation could be likened to the wear
rate of a vehicle tire when the vehicle is travelling in a straight line
compared to the same vehicle making a continuous tight radius turn.

The R155 also shares the durability and mobility characteristics
common to all track mounted equipment. For example, spilled mate-
rial typically has little effect on the tracked undercarriage, unlike
wheel mounted portable units which can suffer signiﬁcant undercarriage damage if left unprotected. Some operators remove the wheels
of such units to combat potential damage but immobilise the plant
by doing so. Either way, clean up around a tracked plant is relatively
easy, with a move to permit loader or skid steer access taking just a
few minutes.

According to McCloskey, suitable applications for the R155 include heavy quarrying, as a primary screen in crusher circuits, site
reclamation, construction and demolition waste and heavy rock. The
heavy duty two bearing screen has a 1.52 m x 4.88 m top deck and
a 1.52 m. x 4.57 m bottom deck for a reported class leading 14.4
sq. m. actual screen area. The side tensioned top deck has quick
release while access to the end tensioned bottom deck is facilitated
by hydraulic lifting. The screen is adjustable from 10 mm @ 950
RPM to 6 mm @ 1130 RPM. Punch plate is standard, with optional
screen box conﬁgurations including ﬁnger decks, Bofar bar and woven mesh. The R155’s hopper has a rated capacity of 8.0 m3 and
the feeder unit may be equipped with heavy duty four-ply belt for
sticky applications, or a Hardox plate feeder for heavy rock, rebar
and other applications containing sharp material. The R155 is powered by a 125 hp Caterpillar diesel engine and weighs 34 000 kg.
Ready for transport, the screen is 3.40 m high, 15.33 m long and
2.90 m wide.