A roundup of the latest asphalt plants 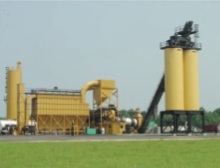 The Milemaker asphalt plants from Asphalt Drum Mixers Inc., are
claimed by the manufacturer to be the most fuel-efﬁcient, mix-design
ﬂexible and productive plants within the 145 to 385 tonnes/h range.

The dual-drum plants use counterﬂ ow technology, which operates separate drying and mixing zones to achieve the maximum level
of heat transfer and fuel efﬁciency. This enables the Milemaker to
achieve a high production volume and an extremely low cost-per-ton
average.

Milemaker plants, which are available in portable, relocatable or
stationary versions, meet all federal and provincial speciﬁcations and
consistently produce quality asphalt to help protect operators against
out-of-spec damages. While producing the latest mix designs, the
plants also come prepared for future job speciﬁcations since dual-drum systems easily can be adapted to accommodate new mix speciﬁcations.

ADM keeps the environment a priority in its designs. The Milemaker ranks as one of the most environmentally sound asphalt plant
in its class. By using counter ﬂow technology, it virtually eliminates
unsafe hydrocarbon emissions, which are a common problem with
other drum mix plants. The Milemaker produces among the cleanest
stack tests and also can handle large percentages of recycled asphalt
pavement (RAP) without reducing the temperature or producing blue
smoke. To make the Milemaker Series even more environmentally
friendly, ADM designed the system to reintroduce residual gases back
to the drum’s combustion zone.

The Milemaker’s design features a sophisticated, yet technically
easy-to-operate control system. One plant operator and one loader operator can control the entire operation. A new operator can be trained
within a few hours, and on-site staff will be able to handle nearly all
maintenance procedures. 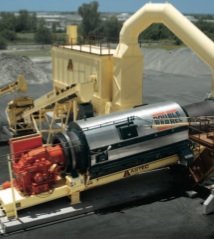 The Astec Double Barrel® Green system is the latest option that
can be included with any new Double Barrel dryer/mixer or added
as a retroﬁ t. The system uses water to produce a foamed warm mix
asphalt that the manufacturer claims is odourless, smokeless and longer lasting. According to Astec, the Double Barrel Green system is
a major breakthrough in warm mix technology because it does not
require the addition of expensive commercial additives. Instead,
water is injected into the mix along with the liquid asphalt cement.
The injection of the water causes the liquid asphalt to foam and expand in volume. The foaming action helps the liquid asphalt coat the
aggregate at a lower temperature. The major beneﬁts of the technology
are a smokeless and odourless production process because the light
oils in the liquid asphalt never reach the boiling point. The Double
Barrel Green system also has the ability to run high percentages of
recycle mix (RAP) with the standard grade of asphalt. Additionally,
due to the 10ºC lower temperature, approximately 14 per cent less fuel
is used corresponding to a 14 per cent increase in production.

The Double Barrel in its standard conﬁguration is a combination aggregate dryer and hot mix asphalt mixer that can run up to 50 per cent RAP with no added fuel costs. The unique design of the
Double Barrel dryer/mixer allows it to keep RAP and virgin aggregates separate until the mixing phase of production. While the virgin
material is dried in the main drum, RAP is injected into the outer mixing chamber. Because the RAP never comes into direct contact with
the hot gas stream of the dryer, no blue smoke emissions are generated, even at maximum RAP content.

The Double Barrel’s design also boosts energy efﬁciency, according to the manufacturer, because virtually all heat produced by the
burner is utilized in the drying and mixing process. Heat used in the
superheating process is captured in the outer mixing chamber and utilized in the blending of mix materials.

The Terex E275P is the latest addition to Terex Roadbuilding’s line
of super-portable asphalt plants. This new counterﬂ ow drum mix plant
features 249 tonnes/h production capabilities and is joined by three
other plants – the E100P, E150P and E225P – to round out the Terex
line of low-load, highly portable plants.

Even with its high production capabilities, the entire E275P counterﬂow plant can be moved in only ﬁve loads: 1) counterﬂow drum
mixer; 2) baghouse; 3) self-erect silo; 4) four cold-feed bins with
scalping screen; and 5) liquid AC tank/control house/fuel tank. Featuring signiﬁcantly fewer connections than traditional portable plants
and no-crane set-up, the E275P can be transported and completely set
up over a weekend, according to the manufacturer.

Pitched at operating angle on its triple-axle chassis with all ductwork preinstalled, the 249 tonne/h counterﬂ ow drum design is claimed
to significantly reduces set-up and teardown times. With the self-contained drum’s 2134 mm diameter and 12.0 m length, the chassis can
be quickly moved with standard “O.D.” permits.

To control particulate emissions, the E275P plant includes the
Roto-Aire RA318 baghouse. With its 48,000 CFM capacity and 4.5 to
1 air-to-cloth ratio, the RA318 has ample capacity to match plant production. Integral to the baghouse, the ﬁnes return auger hydraulically
pivots into position to interconnect the baghouse to the drum, resulting
in no “loose loads” for transport.

For mix storage, the E275P plant includes the self-erect, 86.2-tonne
SE195 silo. Complete with an on-board air compressor, the SE195
hydraulically erects into operating position, while simultaneously the
drag slat conveyor automatically transitions from its nested travel position to the correct operating angle. For ticketing purposes, the silo
is suspended on load cells that accurately weigh the amount of stored
asphalt before and after a truck is loaded.

Plant operation and asphalt mix designs are managed by the Terex
Impulse X control system. Featuring big plant operation in a smaller
plant controls package, the manufacturer claims the Impulse X is capable of making any mix design for which the plant is conﬁgured.

The standard plant package comes complete with a chassis containing four, 18.1-tonne cold-feed bins, a single deck scalping screen,
an underlying bin conveyor and a bulkhead for building an earthen
ramp for loading. The standard 75 708-litre capacity liquid AC and
18 927-litre fuel tanks comprise part of the ﬁnal chassis, and tank
storage sizes can be adjusted and conﬁ gured, up to a total of 94 635
litres, to meet an individual hot mix producer’s needs. The 3.7 m x 5.5
m control house, also located on the AC/fuel tank chassis, serves as
the plant’s nerve center and protects the Impulse X controls from the
elements.