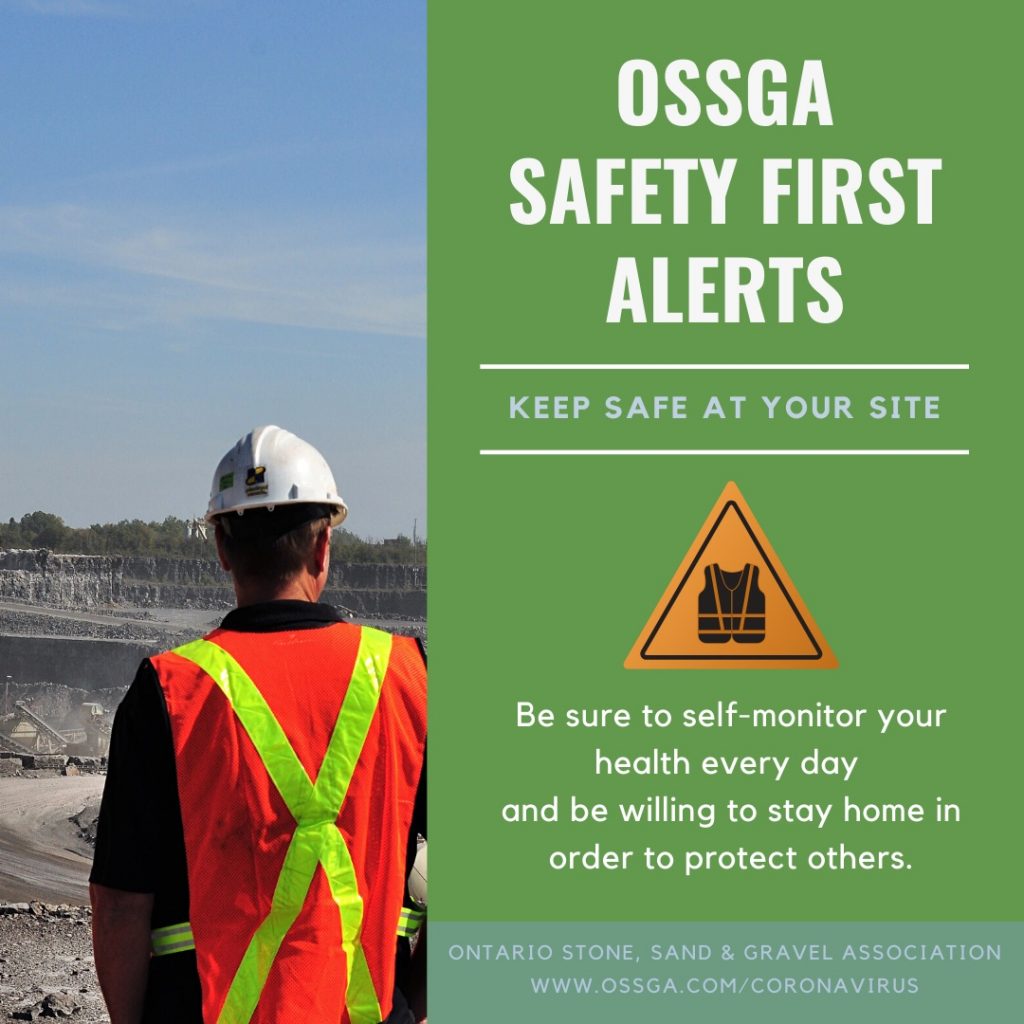 With so much uncertainty surrounding COVID-19 and its effect on the Canadian aggregate industry, it’s encouraging to hear that one of the biggest changes for several associations across the country is simply having to add more Zoom calls to their daily operations.

Since the Ontario Government deemed aggregate an essential service, the Ontario Stone, Sand and Gravel Association (OSSGA) has been up and operating business as usual. Sharon Armstrong, OSSGA vice president of communications and operations, said it was impressive to see the industry come together and develop a plan to work through the pandemic.

“From an operations point of view, we have tried to keep moving forward as much as possible,” she said. “Impressive from an industry standpoint was how quickly everyone banded together and came up with best practices and procedures on how to modify what we do to ensure that everybody is safe.” 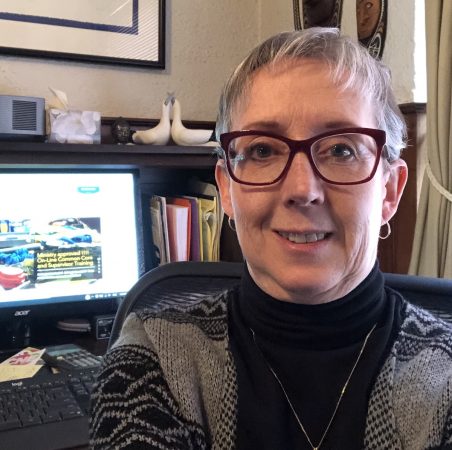 Armstrong said the priority of the association and its members was to follow the government’s guidelines to keep its staff, employees and their families safe. A lot of those discussions took place over Zoom, a cloud-based video conferencing tool where you can host calls with others. Users can open chat rooms and have many attendees all sharing the feed from their webcams, giving the illusion of a typical meeting.

“Like all other industries, we’ve all become very familiar with Zoom,” she said. “We’ve just finished a series of regional meetings across the province. Normally we would have driven to all of those meetings and locations, but we did it through Zoom and had 20 to 30 participants in each of those meetings. Face-to-face we think is still better, but it’s providing opportunities to share best practices and talk about issues and things that are affecting the industry.”

Staying connected is important to OSSGA and its operations.

“Networking is important in our group. It sounds corny, but Zoom meetings have been awesome,” said Armstrong. “They’ve kept everybody connected. Before the meeting we can catch up with one another, have our regular banter—it puts the human edge back into things a little bit more than a conference call would. We’ve been able to keep that sense of community alive which is important to us.”

It’s during these meetings OSSGA found out what concerns may lay ahead for the aggregate industry; immediate and farther down the road. 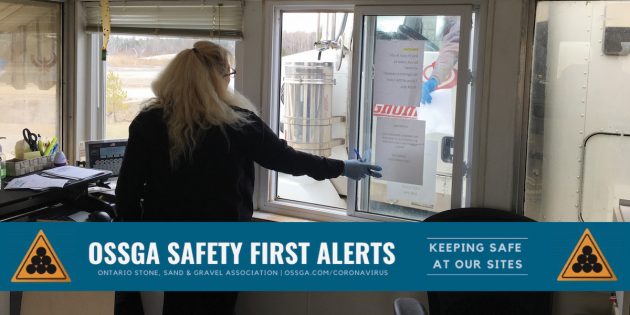 “Essential projects are still going ahead—major infrastructure, hospital construction, and other big projects—but some municipalities are concerned about their infrastructure spending and not tendering projects as they normally would be, so we’re urging the government to help those municipalities because it’s very important that tendering process continues,” said Armstrong. “Even on non-essential jobs, so that when we hit the next phase in the rollout of re-opening the economy, we’re ready to go when those jobs are ready to go.”

Armstrong said it is good that OSSGA’s members are working now, but because there aren’t many projects in the pipeline there will likely be a stoppage if the government doesn’t help Ontario municipalities.

“That’s definitely a concern and we need to make sure that the pipeline is full,” she said.

Armstrong said OSSGA is actively speaking with the government to put its requests forward. She said OSSGA has worked tirelessly to show that it can be safe, that it is safe, and that the aggregate sector should be at the front of the line for getting back out there quickly because the risk is one of the lowest.

OSSGA is a not-for-profit industry association representing over 280 sand, gravel, and crushed stone producers and suppliers of industry products and services. Its members supply most of the approximately 164 million tonnes of aggregate consumed annually in Ontario to build and maintain the province’s infrastructure needs. OSSGA works in partnership with government and the public to promote a safe and competitive aggregate industry contributing to the creation of strong communities in the province. 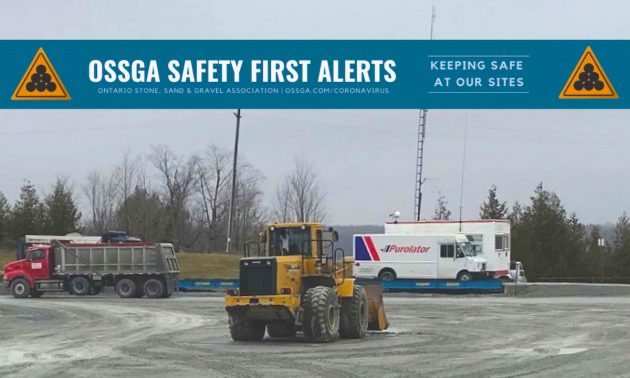 OSSGA has implemented several procedures and modifications to sites and offices to help keep sites safe and compliant of the province’s guidelines.

“On the job sites themselves, managers have had to make a whole bunch of modifications,” said Armstrong. “Many people are making sure the same shifts stay together; work with the same people all the time, as opposed to changing shifts up; staggering shifts so people come in and leave at different times; not punching in with punch cards anymore, someone is doing that for them now.

“Very simple things, like no ride sharing inside the quarry. And also making sure workers have everything they need to disinfect and make sure the environment is safe for them. It’s a matter of everyone taking it seriously and being mindful of what’s being asked and required.”

According to OSSGA, another concern for the industry is the potential slowdown of projects because of lack of inspectors making it out to a site as fast as they may have before social distancing came into effect.

“Municipal and provincial inspectors aren’t coming to inspect as fast as needed sometimes, so a project will stop because it gets to a certain point where it can’t continue without an inspection,” said Armstrong. “We’re working with the government to move that along.”

Armstrong said another concern could be the potential second wave of COVID-19 and its effects of the revamped system.

“If we’re doing tendering differently now, how do we put mechanisms in those new contracts where there will not be penalties down the road if a second wave hits?” asked Armstrong. “In a lot of road construction projects there are late penalties if a project is late or prolonged—so how do we negotiate new language that takes COVD-19 into consideration?”

In the meantime, OSSGA recently received approval for its Common Core and Supervisor training modules to be available online.

“One thing that happens this time of year is training; Common Core and Supervisor. That training usually takes place in person,” said Armstrong. “OSSGA got ministry approval for individuals to get that done online so they can complete the training that allows them to be out in the field.”

Armstrong said that would have been a big barrier to the industry and the Ontario Government was very good at working with OSSGA to put some checks and balances in place to ensure the training can get done.

“We have to verify that the people receiving the training are watching, paying attention, and doing the work required, and all components are being done,” she said.