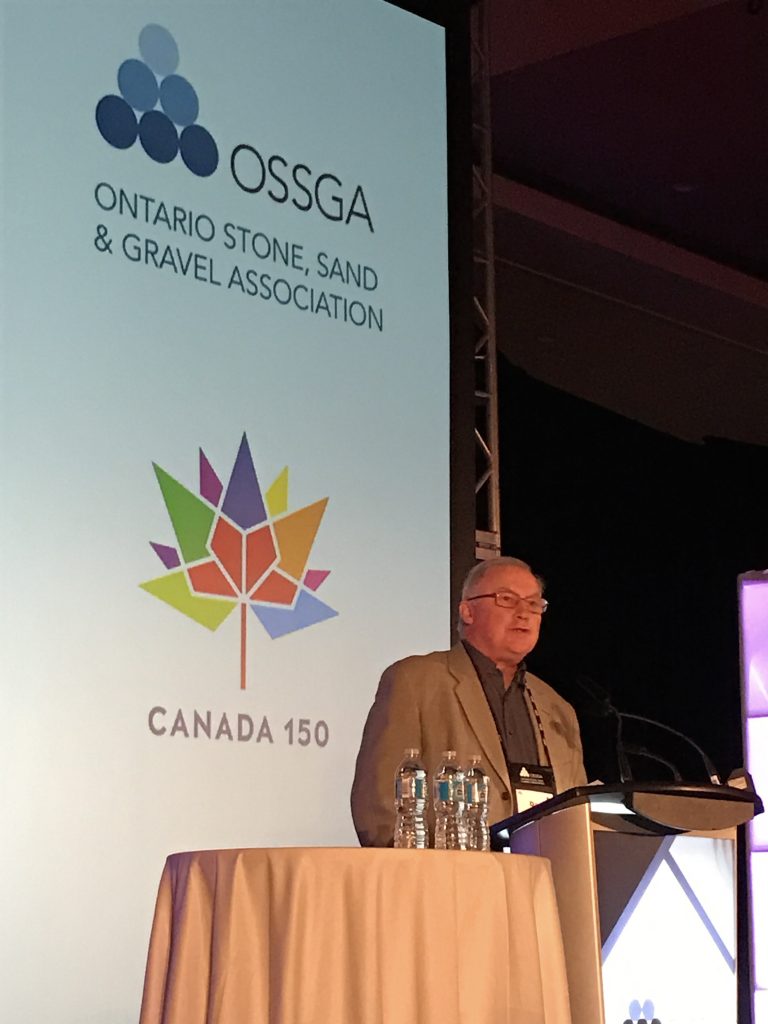 Close to 300 people registered for the annual event, which brings together key members of Ontario’s aggregate industry.

Incoming OSSGA chair Dan O’Hara of Dufferin Aggregates opened the event welcoming attendees to the conference. He told the crowd that with Canada celebrating its 150th birthday, he couldn’t think of a better place to host the event. O’Hara touched on the need for the industry to talk about its successes and tell its own stories.

“Too often in our industry we are defined by others,” he said.

“You are the folks that built our communities, built them strong, and we thank you for that,” Taylor told the crowd.

OSSGA’s vice-president of operations and communications Sharon Armstrong offered the crowd a review of the association’s latest activities.

Armstrong touched on several important issues including the Aggregate Resources Act and the Coordinated Provincial Plan Review. The association has been working diligently on both of these issues, creating recommendations and working with government officials to help ensure a healthy business environment for the Ontario’s aggregate industry.

“OSSGA has been integrally involved in both of these issues,” Armstrong told the crowd.

Marketing initiatives
Getting the word out about all the positive aspects of the aggregate industry was also on the agenda for the first set of sessions.

Armstrong shared the association’s recent marketing initiatives with the crowd including its “Fact or Fiction” Wellington County Pilot Project designed to educate residents in Wellington County while dispelling myths about the aggregate industry.

The campaign started with preliminary research where OSSGA had 1,000 residents across Ontario surveyed that were asked to rate how they feel about four types of community development: windmills, big box retail stores, sand and gravel operations, and bio-waste facilities.

Armstrong told the crowd that there were no differences when comparing age and gender; however, 55% of urban residents opposed sand and gravel operations compared to 44% in non-urban environments.

“That was one of the biggest takeaways of part one of the surveys,” Armstrong said. “We need to address that urban bias… we need to be mindful of that moving forward.”

OSSGA’s marketing initiatives for 2017 include continuing to dispel myths through GravelFacts and continuing to build and enhance GravelFacts.ca; offering producers a tool kit for helping get the facts out in the areas they operate; digital and print advertising;
having 20 gravel trucks delivering positive messages about the industry; showcasing rehabilitation projects; and exhibiting at various trade shows.