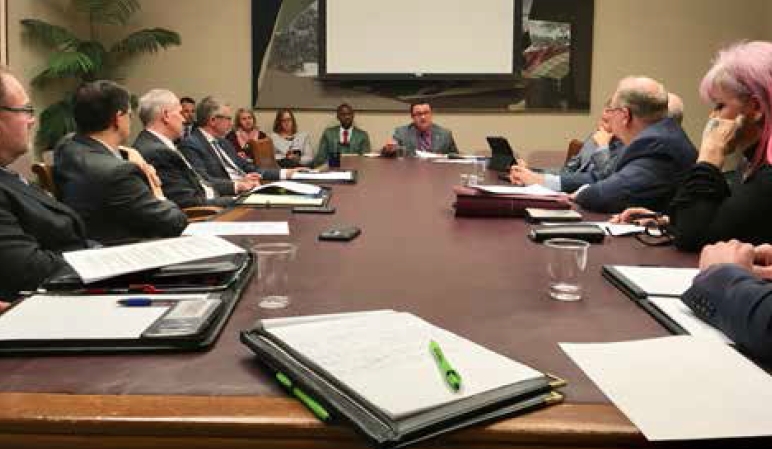 MHCA board members meet with the ministers of Municipal Relations Jeff Wharton (top) and GET Blaine Pedersen (left) on Feb. 8, 2018. Photo: MHCA

February 9, 2018 – Jobs, investment and the potential for economic growth they carry are leaving Manitoba for other provinces because the development of pits and quarries in some municipalities is frustrated, the MHCA told key government ministers at a meeting Thursday.

Manitoba companies have moved millions of dollars for investment elsewhere because of the futility in some rural municipalities of applying to operate a pit or quarry, MHCA President Chris Lorenc told the meeting at the legislature.

Municipal Relations Minister Jeff Wharton, joined by Growth, Enterprise and Trade Minister Blaine Pedersen, told the gathering of senior MHCA board and committee members that his government is working on resolving the issues that spark conflict when applications are made for pits and quarries in some rural municipalities.

Municipal Relations is leading an advisory committee of provincial, municipal and industry members. That committee is in the midst of preparing recommendations to the minister for clarifying authority and jurisdiction, and easing the procedural aspects of applications to balance the sometimes competing interests of economic development, infrastructure resources and public needs.

The meeting at the legislature included senior officials of departments that have statutory authority over land-use planning, resource development and infrastructure investment. The MHCA called for amendments to the Planning Act to clarify jurisdiction and regulatory compliance, and for key positions within the Mines Branch to be filled.

Wharton said his government recognizes a balance must be struck among the interests at play. He reiterated that his government insists all involved in consideration of land-use matter have a ‘fair say.’

Lorenc said the industry respects that the Pallister government is grappling with difficult long-term fixes to Manitoba’s fiscal issues, but stressed there are considerable risks of not making some necessary legislative amendments in the very near term.

“The Planning Act must be clarified so that provincial authority is understood and respected when municipal development plans are framed, such that residents and municipal councils can see their long-term land-use plans set on strong foundations,” he stressed. “Economic growth cannot be assured without that kind of predictability for all development interests.”