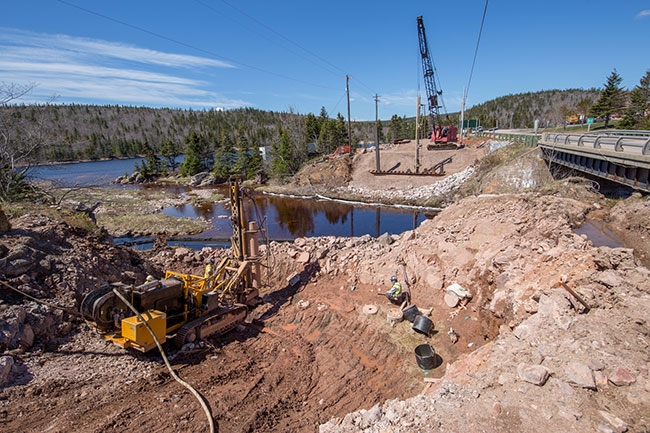 The Plan notes three projects for which roundabouts will be built: on the 101 exit for Digby; Granite Drive in New Minas; and for the new, New Minas Connector, on the 101, for a total of four roundabouts.

In June 2017, TIR noted that it had 32 roundabouts, but this may not be correct, by standard arithmetic. In TIR lingo, revealed in a caption under a photo for the Trunk 7 Interchange outside Antigonish, two roundabouts may be referred to as “a roundabout.” Therefore, the number of roundabouts in the province could be many more than 32.

“In general, roundabouts are a safer alternative to traditional 90 degree intersections; however, different traffic conditions call for different solutions. Engineers study one intersection at a time and consider a variety of factors when determining whether a roundabout is the best solution for an intersection. These factors include improved safety, traffic conditions, geometry and infrastructure,” says Marla MacInnis, media relations advisor for the Province of Nova Scotia.

“TIR does some… concrete pavement becomes competitive with asphalt and more cost effective in areas with high traffic volumes and heavy trucks stopping and turning. Therefore, concrete is not as competitive in jurisdictions such as the Maritimes. Where concrete pavement has been used in Nova Scotia, there was a significant life cycle cost analysis premium placed on them in the tender to even the playing field with asphalt’s lower construction costs,” MacInnis says.

Of interest to others will be how TIR plans to handle the twinning of the one-kilometre long causeway that crosses the Avon River in Windsor – part of the twinning of the section of the 101 between Three Mile Plains and Falmouth. Bemoaned as an environmental disaster by some, and as a gift to the town’s waterfront by others, will it simply be widened with more fill, or changed with, perhaps, a bridge feature, to return it to being a tidal river, with its salmon run, that it once was?

ATIR lists 82 asphalt projects for 2018-19, valued at $101.5 million. “Approximately 10 companies will be involved in asphalt work this year,” MacInnis says.

They include a dozen 100-series repaving tasks, repaving “arterial/collectors,” and repaving local roads. Pavement strengthening, to allow for heavier loads, single-lift overlays and maintenance paving are other descriptors TIR uses to characterize the asphalt work to be done elsewhere.

MacInnis adds, “Pavement preservation is either chip seal, micro seal or a thin lift of asphalt placed over an asphalt surface that was paved approximately five years earlier. Rehabilitation occurs when the asphalt surface has completely failed and it needs to be rebuilt. This may also include the replacement of drainage structures and improving the road drainage.”

Judging from the sorry state of many secondary paved roads, riddled with tire-destroying potholes and long stretches of failed subbase, there will be lots of rebuilding to keep contractors’ heavy machinery revving. One such obstacle course, between Berwick and Aylesford, in Kings County, is on this year’s hit list as a 6.3-kilometre project.

Nova Scotia has about 9,000 kilometres of gravel roads, and TIR has created a new funding category called the Gravel Road Program. With a budget of $20 million, it consists of 81 separate projects from Cape Breton to Yarmouth. All of them listed in the 2018-19 fiscal year; none are noted for the remaining four years of the Plan. These apparently do not include regular grader maintenance for gravel road.

The Plan states that the province has 4,100 bridges. Thirty-seven of them are slated for rehabilitation or replacement in the Plan, and TIR has allocated $29.1 million of the 2018-19 budget to get shaking on the first 10. Strung out from 2018 to 2022, the 37 bridges run from a small one in Hillaton, on Route 358 outside Canning, in Kings County, to four seasons of work on the Great Bras d’Or Crossing Bridge, also known as the Seal Island Bridge, in Cape Breton. The Plan refers to major bridge replacements, but provides little detail on just what each bridge project is about, describing each simply as “major bridge projects” or “other bridge projects.”

The Plan does note that three are multiple-year projects: the Lennox Passage Bridge, Bennery Brook Bridge (three years) and the Great Bras d’Or Crossing Bridge. Completed in 1961, and running between Sydney and Baddeck, this 747-m bridge consists of eight steel box truss spans. Between 2002 to 2004, the road deck was replaced with a precast concrete deck system, and steel trusses reinforced.

MacInnis describes work to be done on the bridge, at least as far as what is currently understood to be required goes: “This work involves a full structural analysis and from that report we will
determine what is required for rehab over the next few years. This could include sandblasting, repainting, etc. We won’t know until the analysis is complete later this year.”