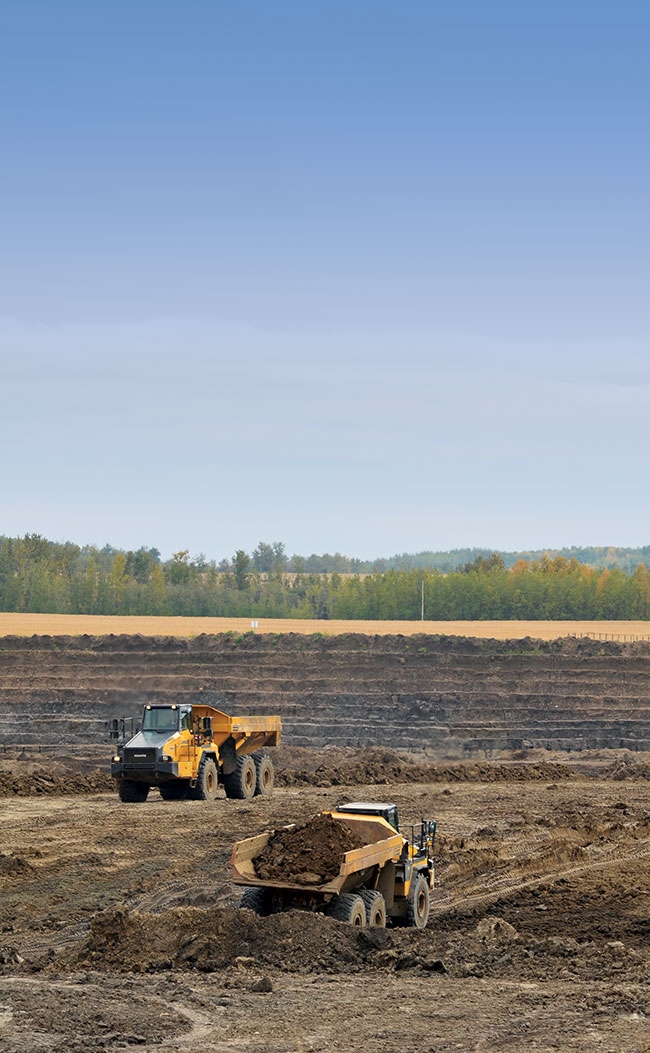 At 15 tonnes, Alberta uses more tonnes of aggregate per capita than any other province. Despite the province’s needs for stone, sand and gravel products, industry still has its challenges starting up and operating pits and quarries in many communities, due to concerns from residents related to groundwater quality, increased truck traffic, and potential dust and noise. In areas where residents are especially concerned, community outreach and regular communication between producers and residents are keys to creating positive relationships between municipalities and aggregate companies.

In the case of acquiring new licenses and operating new pits, consultation with the affected communities and residents is a necessary part of the process for all aggregate producers, but some companies go above and beyond. One example is Lafarge Canada’s Calahoo Pit, which was awarded the Alberta Sand & Gravel Association’s inaugural ASGA Award of Excellence in 2018. The award was developed to spotlight outstanding examples of stewardship, community relations and operations from aggregate producers in Alberta.

The Calahoo Pit is a major source of aggregates for the Edmonton area, and is located about 30 kilometres northwest of the city. Permits to begin extraction were finalized back in 2012 with mining commencing in 2013. Although the area is sparsely populated, approximately 500 people live within a three-kilometre radius of the pit, Lafarge has gone to great lengths to ensure the residents in the area stay informed with any changes to the operation and provides assurance that their well networks are protected through the groundwater monitoring program. The annual groundwater monitoring network has existed in the area since 2001, and extends over the 13-km long by 3-km wide regional aggregate deposit.

“The monitoring well program consists of 21 monitoring wells, paid for by the aggregate producers, but administered by Sturgeon County who engages a third-party environmental consultant,” says Bill Gowdy, Lafarge’s environment and public affairs manager for northern Alberta. “In addition, another dozen monitoring wells and nearby resident wells are also monitored for water levels and water chemistry by the aggregate producers through third-party consultants. An annual groundwater monitoring report for the area is prepared and is publically available. The monitoring well network has evolved over the years with additional wells being added as the need arises and extraction migrates.

Back to school
Between the long-term groundwater monitoring program and actively communicating with residents, Lafarge has been improving relations with the nearby residents; however, they have also found another way to build on its positive relationships while solving a serious challenge affecting most aggregate companies – the recruiting and training of its next generation of skilled workers.

Lafarge has teamed up with the Northern Alberta Institute of Technology in Edmonton (NAIT) and Sturgeon Composite High School, and provides the students of both educational institutions classroom lectures on geology, the environment and its Calahoo Pit operations. As part of NAIT’s field school, the students tour the Calahoo Pit. The tours convey the importance of aggregates and the aggregate industry as a whole, while offering a balanced message of the real impacts of operations.

“We’re more than happy to take them out there to explain the geology, the mining and the programs in place to ensure environmental protection,” Gowdy says.

Lafarge has also set up summer fieldwork placements for students at NAIT. These students get the opportunity to job shadow experienced staff members while gaining experience within the industry. The NAIT Geological Technology program provides a minimum two-week summer placement for its students between their first and second years. Over 30 students have participated in the job shadow program over the years.

“Our relationship is needed to tie in real-world experience with the curriculum,” says Candace Farrer, interim chair and long-time instructor for the Department of Geological Technology at NAIT. “It really helps bridge that gap. We want to make sure that our students are prepared for the industry.”

By placing students with Lafarge, NAIT can also ensure that its classes remain relevant to the needs of the industry. Farrer says her program is grateful for all the efforts Lafarge makes to ensure their students are well prepared for the real world.

“It affirms for us that the content for our students is relevant,” she says.

These work placements have resulted in full-time work for some of NAIT’s graduating students.

“Lafarge Canada has hired three students from NAIT over the last few years,” says Gowdy, who is also the chair of the advisory committee for NAIT’s Department of Geological Technology. Lafarge has participated on the committee since 2008.

Students don’t just get to go on site when the sun is shining, either. These tours are often done in the cold, or when it is raining or snowing, so the students get a realistic idea of working in aggregate operations.

NAIT’s students get to see active mining operations and reclaimed pits first-hand. They get to review the geological history and deposition of the sedimentary layers using cross sections, see exposed pit faces and stratigraphy. Lafarge also discusses the Sturgeon County monitoring well network with the students, and allows them to measure water levels and use their multimeter to get water parameters, and collect water samples. Drill logs (lithological) of the wells they measure are provided. They take the field data they gather and review it in a class exercise.

“In order for students to succeed they need to have buy-in,” Gowdy says. “For the students, this is relavant, as it is real information from a real world project.”

At Sturgeon Composite High School, Lafarge brings in speakers to talk about the local aggregates industry. Gowdy has done presentations with four science classes at the school – a total of 350 staff and students – on the importance, use and consumption of aggregates; reclamation practices; biodiversity programs; and the types of careers available in the industry (outlining pre-requisites required to pursue those careers in post-secondary schools). Gowdy even brings rock, mineral and fossil specimens with him to show the classes some of the materials he works with on a regular basis.

In addition to peaking the interest of potential future employees, Lafarge is filling young minds with industry knowledge they can take back with them and share among their families and friends. In an industry that constantly struggles with community and municipal relations – partially due to a general lack of understanding of its operations – this benefit alone should pay dividends well into the future for all members of industry in the region. Whether its happier residents around the Calahoo Pit, NAIT students graduating into positions within the industry, or just a better understanding of aggregate operations by the general public, Lafarge’s education and outreach efforts have definitely created a winning scenario for everyone in the Edmonton area.