July 11, 2013 – The
Conference Board of Canada released a report that counted the demand for Canadian
truck drivers and found that the average age of a truck driver was higher
than it was for the average worker.

This was due mostly to fewer
young workers entering the industry.

The analysis relied primarily
on two data sources – the 2006 Census and the Labour Force Survey. In addition,
the board conducted a small survey of trucking companies across the country. It
found that the average reported driver age per company ranged from 44 to 51
years, suggesting that the average driver age may in fact be higher than 44.

New data from the National
Household Survey were just released, allowing for an updated and more accurate
look at driver demographics. These data confirm what the board expected – that
the average age of a truck driver has continued to increase at a faster rate
than the rest of the labour force. The board finds that the average truck
driver age is 46 years, whereas the average worker age is 41.5 years.

Chart 1 shows the share of
truck drivers by age unit relative to the rest of the labour force in 2006,
while Chart 2 shows the same data for 2011. Of note is the fact that in 2006
the share of drivers in the 30 to 34 age range was 10 per cent, the same as it
was for the total labour force. In 2011, 8.5 per cent of drivers found
themselves in this age group. For the total labour force, there was a slight
increase to 10.4 per cent.

Furthermore, 4.4 per cent of
drivers are 65 and over (up from three per cent in 2006). For the total labour
force, the share of this age unit increased from 2.6 per cent to 3.5 per cent.
This confirms that in the trucking industry, more than in others, "new" sources
of labour are delayed retirements.

Chart 3 directly compares
driver demographics in 2006 and 2011. The increase in the average driver age is
due to a drop in the share of drivers who are between 20 and 29 years old. In
2006, 11.6 per cent of truck drivers were in that age group. By 2011, this had
declined to just 8.8 per cent of the driver population. On the other end of the
spectrum are drivers who are aged 55 years and older. The share of the driver
population in that age group has increased from 20 per cent to 26 per cent. 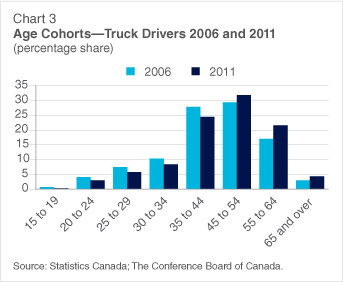 Something that the board
heard from the industry during its research was that while trucking companies
were having difficulty recruiting younger drivers, they were having some
success in attracting new drivers who were 35 to 40 years or older (although
apparently not enough to replace all the exits from the 35 to 44 age bracket).
Companies will have to continue to recruit from wherever they can. But there is
a distinct disadvantage for the industry as a whole from recruiting 40 year
olds, rather than 25 year olds. Every 40 year old will potentially have 25
years of driving left, whereas a 25 year old will potentially have 40 years. In
the long run then, for every 25 year old that the industry does not recruit, it
will have to recruit close to two 40 year olds.

As mentioned in the report,
it will ultimately be up to the industry to address this ongoing challenge and
to make the occupation more attractive to younger drivers. But as the board
also put forth, it will also be important to convince customers of the need to
address this challenge now and to work with them to develop strategies that
will make the best use of drivers' time, as the trucking industry has a long
track record of sharing its productivity benefits with customers through lower
prices.