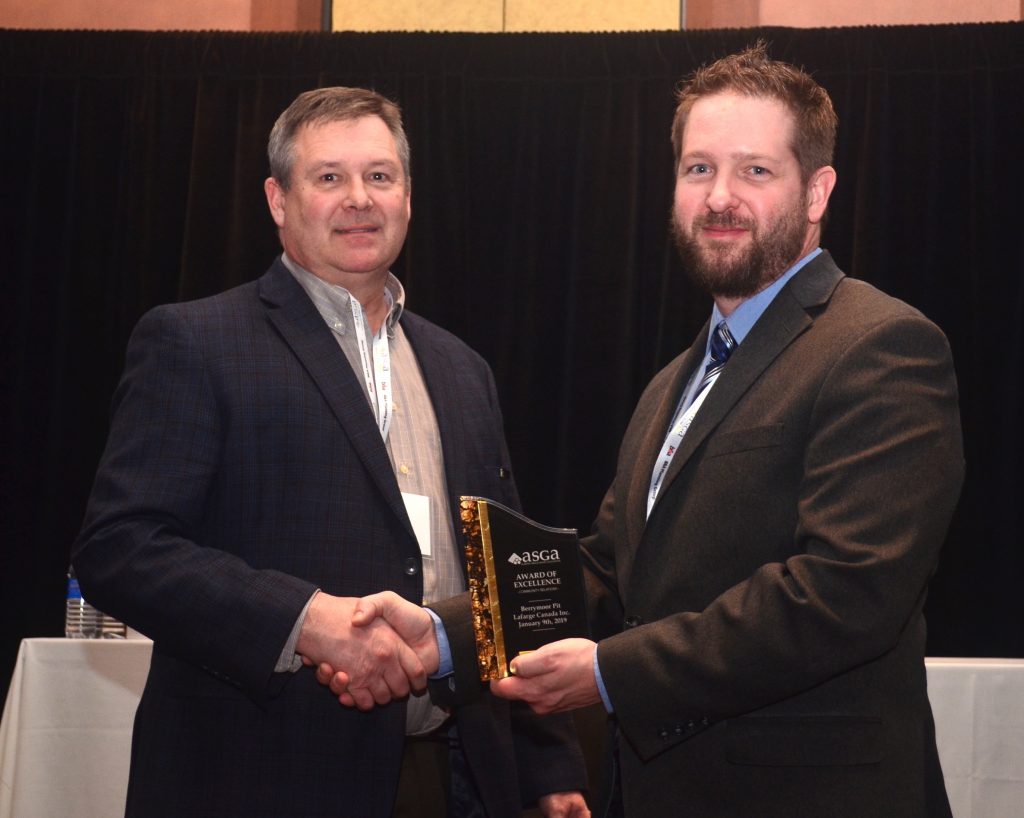 The Alberta Sand & Gravel Association (ASGA) kicked off its annual general meeting and trade show held Jan. 9 and 10 with a record registration of approximately 265 attendees flocking to the River Cree Resort & Casino in Enoch, Alta.

ASGA president Dale Soetaert kicked off the annual business meeting thanking members, sponsors and staff for their dedication and support for the association before offering an update on ASGA’s Truck Registry Program.

The number of trucks registered for the ASGA Truck Registry Program was down in 2018. Soetaert stressed the importance of the program both as a revenue generation tool for the association and as a self-policing mechanism. He added that the most common complaint that the industry receives from the public is related to trucks on the road, and that the program goes a long way for improving relations within the communities that ASGA’s producer members operate within.

One recent change made to the truck registry program – designed to help boost the number of operators registering – is that individual trucks can now register, where only larger companies could originally register in the program.

“It allows us to have more trucks in the system,” Soetaert said. “It’s important that we get as many trucks registered as possible.”

ASGA’s priorities
Soetaert also discussed the direction he would like to see the association go in the final year of his three-year term as ASGA’s president as well as far into the future.

“Our No. 1 priority should be ensuring access to the very base materials every economic pillar is built on in the province,” he says, adding that advocating for the long-term protection of aggregate protection needs to include not sterilizing reserves based on poor planning and lack of public support.

“The resource is a critical part of the Alberta economy,” he says. “The farther away it gets, the more expensive it gets for the economy. The further away you are, the more trucks you’ll have on the road. Keep access to the resources close to market.”

When it comes to improving membership support, Soetaert says that as long as ASGA does a good job with its communications to its members – whether that’s providing communications materials, open houses, communications with municipalities and regulatory agencies – that the association’s membership will continue to increase. One of his goals is to have every aggregate operator in Alberta become a member of the association.

“Anybody that is making gravel should be a member; and all those people involved, whether they’re supplying products and services or are part of the regulatory fabric should be a member,” he says, adding that this would help get everyone working on the same page and speaking the same language.

One of ASGA’s struggles that Soetaert discussed was the financial limitations of the association. He said that by increasing membership enrolment and finding other ways to increase the revenues of the association, they could offer a stronger voice for Alberta’ aggregates industry. With increased revenues ASGA could increase its educational outreach efforts, which could go a long way for improving community relations. Soetaert believes there could currently be a fair amount of misinformation going out about Alberta’s aggregates industry in regards to orphaned pits.

“We have a perceived issue with orphan pits,” he says, adding that no one really knows how many pits in the province have, in fact, been orphaned, and how many are actually just sitting dormant because there hasn’t been any work available for a long time in a particular region that justifies the extraction of the resources.

“We do not know the information around it. We have no valid numbers around this,” Soetaert says. “Just because a pit hasn’t been used for 10 years doesn’t mean that it has been orphaned.”

He says that finding out the exact number of orphaned pits could help with preventing NIMBYism in particular regions.

GAIN is a voluntary association founded by former UEPG president Jim O’Brien in 2010. The organization fosters and promotes international sharing of experiences and best practices to create a more efficient and sustainable aggregates industry globally. GAIN members currently represent over 75 per cent of global aggregates production, and is continuing to grow.

“GAIN, for lack of a better word, is gaining a lot of momentum with a global presence,” Morrey told the crowd. “It is not just a selection of a few countries, it really is touching on every corner of the world.”

Morrey highlighted the production numbers, challenges and opportunities of various GAIN members from around the globe, including China, which is by far the largest producer of aggregates in the world. Morrey says China is also leading in the technological and social aspects of the aggregates sector. China currently accounts for 40 per cent of the world’s entire production of aggregates with all of Asia producing 67 per cent of the world’s total.

Morrey also listed the 10 key priorities for GAIN, which are:

“Globally aggregates has a great future,” he said.

The GAIN 2020 conference will tentatively take place in Argentina. For more information on GAIN, visit www.gain.ie.