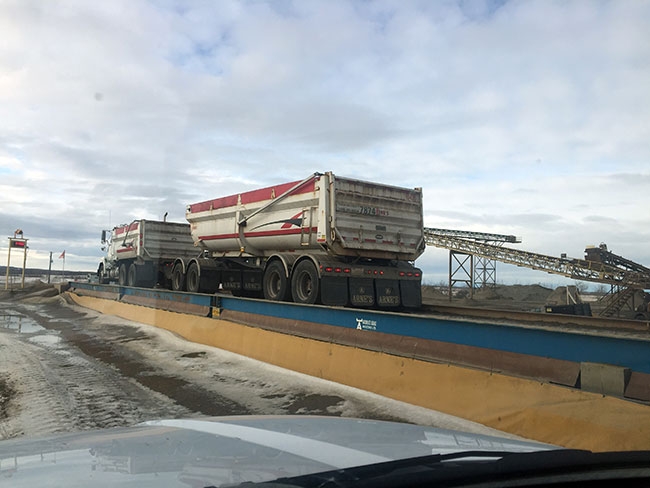 The program had experienced a decline in the number of registered trucks this past year.

Soetaert stressed the importance of the program to attendees in terms of revenue generation for the association, consistency and enforcement. The program was started in 2004.

“It’s a self-check that we can do as an industry to show municipalities that we care,” Soetaert told the crowd.

He added that the No. 1 complaint the industry receives from the general public is related to gravel trucks, and that if industry doesn’t manage the issue of truck complaints, it could end up being managed by another party.

A Truck Registry Sub-Committee has been created to deal with issues related to the program with BURNCO Rock Products’ Travis Coates leading the sub-committee as chair.

Rock to Road sat down with both Coates and Soetaert during the AGM to discuss future plans for the program. Coates said that there are three core improvements that he would like to see made in 2018.

The first improvement is an automated complaint follow-up system, which will generate reminders to companies to follow up on complaints they receive from the public, which will improve relationships between producers, citizens and municipalities.

“Having a system to better facilitate this would be huge,” Coates says.

Another change that ASGA would like to make to the truck registry is to expand who is able to register for the program. Under the current format, only producer members can register. Allowing non-producer members to register will increase participation in the program while allowing producers the ability to see a driver’s history and any complaints lodged against them.

Soetaert says this feature will make it easier for producers to introduce suspensions or other types of disciplinary actions against drivers that are receiving complaints against them from citizens.

Coates adds that holding drivers more accountable for their actions will be good for business and force some drivers to be more responsible on the roads; while at the same time reward those drivers that have none, or very few, complaints lodged against them from citizens.

The third core improvement ASGA is looking to add to the program in 2018 is the ability to generate more standardized responses that producers can then use or tweak to help save time when dealing with more common complaints from the public.

“We feel there’s room for more common complaints having standardized responses,” Coates says, adding that having these available to non-producers could make life easier for the hauling companies, giving them the ability to deal with complaints in an efficient manner.

“Municipalities appreciate having the ability to call and find who the drivers are,” Soetaert adds.

Soetaert and Coates are both excited to have all of these initiatives on the agenda for 2018.

“There’s always room for improvement,” Soetaert says. “We’ve received feedback from members so we’re getting some changes done to address that.”

For more information on how to register for the Alberta Sand & Gravel Association’s Truck Registry Program, visit: www.asga.ab.ca.