Features Heavy Equipment
A lifetime of service: AEM’s Dennis Slater on 39 years in the industry 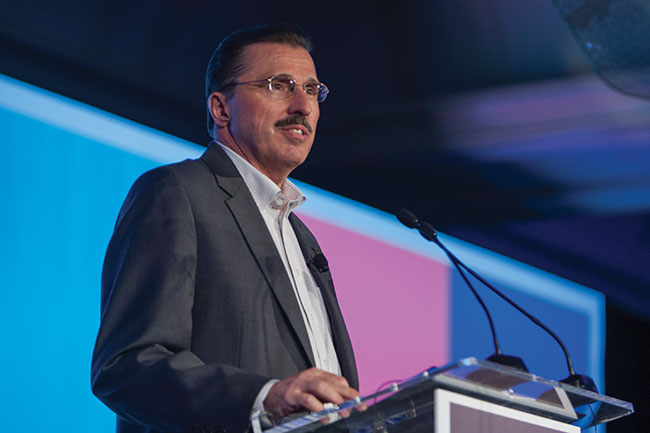 Dennis Slater, president of the Association of Equipment Manufacturers (AEM).

These days, it’s extremely rare to meet someone whose passion for their industry and company keeps their interest over the course of their entire career. That said, it still happens. Dennis Slater, president of the Association of Equipment Manufacturers (AEM) is living proof of this.

Set to retire later this year, Slater has dedicated the past 39 years to advocating for construction industry and farming industry equipment manufacturers.

Despite his long tenure in an advocacy role for the industry, this wasn’t Slater’s first career out of school.

After graduating from Carroll University in Waukesha, Wisc. in 1980 with a B.A. in journalism, Slater took a position as a newspaper reporter and editor for a local newspaper. After working at the newspaper for a couple of years, Slater wanted to try his hand at something new, and decided to take a public relations position with an association called the Construction Industry Manufacturers Association (CIMA) in May of 1982. Little did he know then, that this would be the place where he would dedicate his entire career.

“I started as publications editor, writing the newsletter and news releases, and did that for about three years with the organization,” Slater recalls.

About three years into his time with CIMA, the person in charge of CONEXPO left the association. Slater saw this as an opportunity to step up within the organization, not yet knowing the scope of the work this entailed.

“Having never been to the show, I thought I was highly qualified to run it,” Slater laughs. “So, I told my boss that I’d be glad to take that over and he laughed at me. I went home and thought I’d made the dumbest decision of my life because I had made a fool of myself. The next day he gave me the job and I basically did on-the-job training for learning how to be a show manager. I got very involved with the trade show association out there and learned the business as I went.

“Keep in mind I was working on CONEXPO ’87 and the world was really different in those days, much simpler. Trade shows were face to face, CONEXPO had 300 exhibitors and less than a million square feet, so it was a different world back then, although it did have 100,000 attendees.”

During this time, Slater learned as much as he could about running and managing trade shows, and he quickly became the association’s go-to person for events. It was Slater who recognized that CONEXPO should have a shorter cycle time between shows.

“The show was only every six years back in those days. Having a good, professional recognized show, and recognizing how products were developed back in those days, I realized it really needed to be a three-year show cycle,” he says. “And also work in unison with bauma in Munich and Intermat Paris, so every year there would be an international trade show with status that would be held.”

CIMA was not in favour of doing the trade show every three years without a partner, so Slater reached out to the owners of CON-AGG.

“We put an agreement together and basically formed this joint venture of CONEXPO-CON/AGG,” he says.

In 1994, Slater was able to have a formal agreement reached. CONEXPO became partners with CON-AGG and formed CONEXPO-CON/AGG, which opened its first partnered show in 1996.

“CONEXPO-CON/AGG grew very quickly in 1996 and 1999 to the point today where we now have over 2,000 exhibitors and 2.6-million net square feet, so I really felt good about the direction the trade show took at that time,” he said.

The association viewed CONEXPO-CON/AGG as a gathering place for industry professionals, so they also added other annual conventions from additional associations, such as the Associated General Contractors of America (AGC).

“We had these agreements where we started to bring about half a dozen other conventions and about 300 other industry meetings to the show. It became a gathering place. That really became the foundation of my involvement for a long period of time with the organization,” Slater says.

The World of Asphalt trade show also became part of the trade show group under Slater’s leadership. There were also CONEXPOs ran in Russia and China for a number of years, as well as major agriculture-related trade shows.

“In helping our members do business with customers, we continually go out and look for opportunities,” he says. 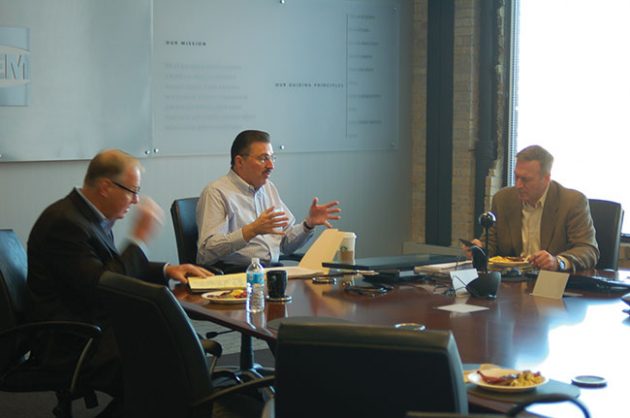 During Slater’s time with AEM/CIMA, market data analysis and statistics, and advocacy, became major components of AEM’s services to the industry. Photos: AEM.

Head of the table


In the late 1990s, while Slater was overseeing CONEXPO-CON/AGG and continuing to build the many different relationships between the association and other members of the construction industry, a big opportunity presented itself to him.

“The head of the organization had retired, and they wanted to team me up [with him] to take that job in the future, and in 1998 I became the head of the CIMA group,” he recalls. “I continued to do CONEXPO while I did that for a while.”

In addition to an expanding trade show, Slater was helping manage a growing association.

At this time, serious discussions were going on about merging CIMA with another association to form one united association for equipment manufacturers.

“We merged with the Equipment Manufacturers Institute and formed AEM in 2001,” Slater says.

After sharing the role of co-president for the first year of AEM, Slater was then named the sole president of the association.

“Although I was first in journalism and running trade shows, along the way I worked on membership and a number of other things. My history with the organization, although it has its roots [in trade shows and publications], evolved into running almost every different facet of things as I worked my way through the organization,” Slater says.


In 2002, as AEM was formed, the organization now had all the major players in construction, agriculture, utilities, forestry and mining industries.

“They were all part of this big organization and I think it gave us critical mass to be relevant to serve the industry, so our focus started to change,” Slater says.

Although industry trade shows are still a key component of the organization, market data analysis and statistics became another component to the services AEM provides its members.

“One of the biggest growth areas of the years was in market data. That’s a centerpiece of what we do,” Slater says.

Advocacy became another major component of AEM’s services to the industry.

“At the time we formed AEM, our D.C. office had two or three people in it. Instead of influencing where things would go, we were more involved with informing our members of what was going on in the U.S. and in Canada. But 10 years ago, we decided to go all-in with this and our team in D.C., which covers D.C. and Ottawa, is 10 people and we’re with six or seven paid lobbyists,” Slater says.

“We now look at influencing things, telling the stories of this industry: Why is infrastructure important? Why is trade a key issue? So, if anything has changed dramatically in the last 10 years, it’s been AEM’s involvement in advocacy.”

“If you’re in the sand and gravel business, you know how the regulatory side affects so much of what you can do – even just permits for having a quarry,” Slater says. “Then there’s the dust issues to deal with and the silica issues to deal with, so that’s another part of what we’re involved in – the standards and regulatory issues, technical committees – that’s emerged over time.” 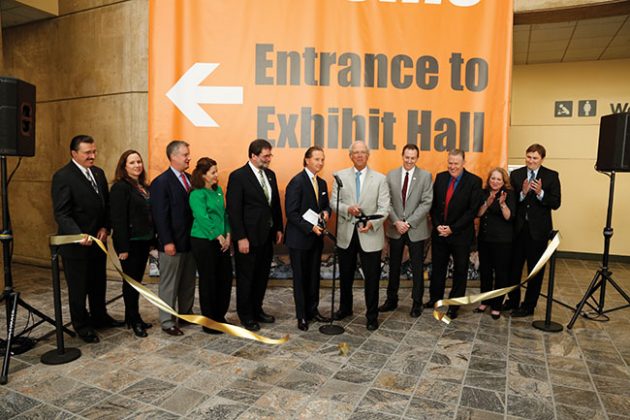 Over his 39 years with AEM, Slater says one of his proudest moments was putting the joint venture together that built the current version of CONEXPO-CON/AGG. Photo: AEM.


As Slater began to consider retirement, he sat down and thought long and hard about where the organization was currently, and where it was going.

“About three years ago I turned 60, and I started looking at what’s next for me and AEM. I really felt that we were in a good position. Our staff is now over 100 people, so we really expanded as an organization. I wanted to develop a two-year plan to do an internal search, using the talent we have in the office, to replace myself. I talked to our board of directors back in 2019 and they agreed,” he says.

“I thought it was very important to look internally because AEM has a very talented staff. Being in Milwaukee, most people we bring into the organization aren’t familiar with trade associations, so we train our team and develop a really good culture here of people that get things done.”

Over the next two years, the board of directors and Slater put together a process that resulted in the selection of Megan Tanel (currently senior vice-president of the construction sector) as the next president of AEM.

“I feel really good that we were able to that, because there’s a momentum going right now by our organization to serve our members, and I know it’s something Megan will do a great job with moving forward,” Slater says. “Equally important, I knew the organization was in good hands, so it was time for me to go off and do something else.”

Slater is looking forward to having time to do many of the things he wasn’t able to do during his time with AEM.

“With this kind of job, you’re on the road four or five times a month, maybe 100 days a year at meetings and events, and your life is a patchwork in between all that. So, the opportunity to do all those things I always wanted to do became part of the foundation of why I decided to retire,” he says.

Over his 39 years with the organization, Slater says one of his proudest moments over his tenure at AEM/CIMA was putting the joint venture together that built the current version of CONEXPO-CON/AGG.

“The whole idea that we could create a colossal event that could serve an industry was a very proud moment, and it has proven that with its success,” he says.

Another highlight of his time with the organization was the forming of AEM.

“Being a former journalist, I got to be the author for the points for the memorandum of understanding,” Slater says. “Embarking to create that was something. You had two organizations that weren’t that efficient and created one organization now that’s so relevant for serving the members.”

Now that he’s in the home stretch towards his retirement, Slater is excited to write his next chapter.

“I joke with my wife a lot that I’d like to travel where I can actually see things,” he says. “I’m a history buff, so when I travel places, I like to get into the history of what happened there. I also have two young granddaughters – both of my kids are adults – so I’m never going to bored.”

If there’s a final message that Slater would like to convey to people and organizations in the industry, it is this:

“To me, I’ve always thought that passion overwhelms talent and I think that’s where I played. Anytime I played something, I played offence. That way you always strive to do more. Don’t always try to defend your positions. When you play defence, you can only preserve what you’ve already got.”

This article appears in the September/October 2021 issue of Rock to Road. Read the digital edition.