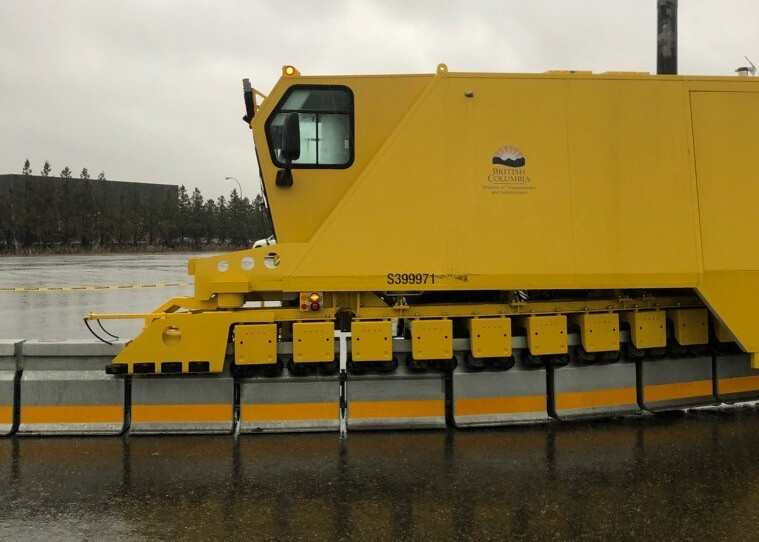 Dec. 18, 2019, B.C. – A moveable barrier system with a zipper truck is about to make its debut on the Alex Fraser Bridge to make this key crossing safer and faster for commuters.

This innovative type of counterflow improves capacity on the bridge and eliminates potential for cross-over collisions during counterflow, as traffic is continually separated by barriers. The system is in the testing phase and expected to be in place for drivers sometime in mid-December 2019.

“The Alex Fraser Bridge project shows how we are working closely with our partners to build the modern transportation infrastructure needed to keep people safe and support long-term economic growth,” said Catherine McKenna, federal Minister of Infrastructure and Communities. “Together, we are helping communities make positive changes to improve people’s lives, keep our businesses competitive and reduce carbon emissions for our children and grandchildren.”

Ravi Kahlon, MLA for Delta-North, on behalf of Claire Trevena, B.C.’s Minister of Transportation and Infrastructure, hosted a preview of the zipper truck in action near the weigh scale at Nordel Way on Dec. 12, 2019.

“I’m thrilled to welcome the zipper system to the Alex Fraser Bridge, which will create an additional lane during peak times and keep drivers protected by barriers,” said Kahlon. “It will make a noticeable and positive difference for about 120,000 people who drive across the Alex Fraser Bridge every day, getting people to work and back home to their families more quickly and reliably.”

Upgrades for cyclists and pedestrians include new wayfinding signs, better access via the Cliveden Avenue interchange, widening narrow sections of sidewalk on the bridge and improving the Cliveden and Nordel pathways.

The South of Fraser Advance Traveller Information System portion of the project is ongoing and expected to be finished in spring 2020. Thirteen new dynamic message signs are being installed that will predict the estimated travel time on four major Fraser River crossings — Alex Fraser Bridge, Port Mann Bridge, Pattullo Bridge and the George Massey Tunnel. Signs allowing drivers to choose their best route will be located along Highway 17, Highway 1, Highway 10, Marine Way and Knight Street.