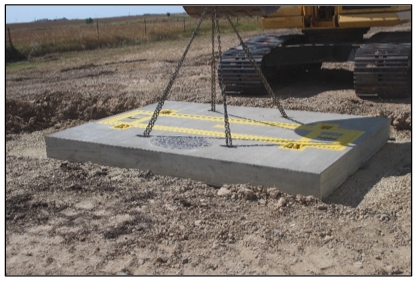 Any company with frequent over-the-road traffic would benefit from an on-site scale to prevent overweight trucks from hitting the highways and to ensure their trucks are safe and roadworthy.

However, until recently, the high initial cost of a static scale has prevented many of these companies from gaining the benefit of an on-site scale. Now, new technology has come on the market that provides the information they need with a return on investment (ROI) fast enough to make the scale economically viable. The new system simplifies the weighing process, while also allowing maximum flexibility in where the scale can be installed and how it is used.

Quarries, trucking companies, logistics facilities, and farmers are prime examples of users who would benefit from on-site weighing.

For instance, farmers’ and co-ops’ livelihoods depend on maximizing their crops and managing their inventories. They want to manage crops, monitor inventory levels, and know that trucks are full – but not overweight – before leaving the farm.

Many times their operation hinges on lines of credit with their local banks, which is directly tied to their inventory levels. Without a scale, these inventories are educated guesses; banks compensate for this uncertainty by extending credit based on an estimate of a shrinkage percentage. Having access to a reliable scale on-site gives the farmers an accurate tool to measure and track their crops, thereby maximizing their credit with the banks. This also helps ensure that when they sell their crops, they are paid for the accurate yield and not based on a shrinkage write-off on the buyers’ end.

Another example is aggregate processing companies, which need cost-effective weighing tools that will help them prevent rollovers. An on-site scale can prevent overloading, and also ensure the loads are distributed evenly across the truck. This allows them to prevent the trucks from tipping over when the loads are raised to dump.

In the past, there have been few cost effective scale options for checking weigh loads. One option is the full length static truck scale. These “highway system” truck scales include separate sections of the scale to weigh steering, drive, and trailer axle sets. Another option is driving off-site to the nearest certified truck scale. This results in either a less-than-full load, or a return to the farm to offload the excess weight. A more affordable option is the single axle static scale, which weighs the axle set one at a time. Unfortunately,it is a very slow process to weigh the entire truck using this static weight option.

New to the market is a cost-effective slow-speed axle scale system for those who need to check-weigh loads but lack the space or need for a full-size truck scale. While not a legal-for-trade scale, the technology is a good investment for customers who want to better manage inventory and reduce their overload risks. Called the AxleSurance Weigh System, the new technology is typically less than half the cost of a new standard 70-foot statis truck scale.

The new weigh system focuses on simplicity in design and use, reliability, and repeatability. First and foremost, it is easy to install and easy to use. Many of these scales will be used in remote locations, and users can maintain the scale and make use of its features on their own, without specialized technical personnel.

One of the major features of the technology is the relatively low cost of shipping and installing the scale compared to static scales, which require full flatbed trucks and a full construction crew to build the foundation and set the scale. The standard AxleSurance scale is 11-feet wide and arrives in a precast base that measures 12-feet by 8-feet 5-inches by 11 feet 5-inches. The full system comes with an unattended instrument console, remote LED display, data and homerun cable.

Once installed, the system works best at slow, consistent speed (around three miles per hour) and will calculate, display, and capture each individual axle as it rolls over the scale. It then sums the weights and prints individual axle and gross weights on the tickets. Tare weights can be pre-stored into the database or recorded with an in/out operation.

The system provides axle and gross truck weights that can be displayed, printed, and saved for easy record keeping. The unattended console is essentially a self-contained control unit that drivers can operate entirely independently.

Each version is fully customizable, allowing the customer to identify and weigh trucks either as a one-pass system (if truck IDs are pre-stored) or two-pass if tare weights must be established. Axle weights, truck ID, and contents are all captured, printed for the driver, and stored in the database for future analysis and integration into the customer’s ERP systems.

The system also includes remote clickers and an unlimited truck ID system, which allows users to simplify the process and record as much information as they need with each transaction.

Fills the need for lower cost of entry scale

There is a need for a lower cost-of-entry scale that will fill the gap where full-size truck scales are not practical. The new technology is an easy-to-install and easy-to-use slow-speed axle scale system that reduces install time, real estate, and operation time.