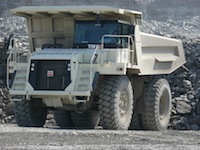 December 9, 2013, Westport, Conn. – Terex Corporation
announced that it has agreed to sell its truck business to Volvo Construction
Equipment for approximately $160 million.

December 9, 2013, Westport, Conn. – Terex Corporation
announced that it has agreed to sell its truck business to Volvo Construction
Equipment for approximately $160 million.

The truck business manufactures and sells off-highway rigid
and articulated haul trucks. Included in the transaction is the manufacturing
facility in Motherwell, Scotland. The sale, which is subject to government
regulatory approvals and other customary closing conditions, is targeted to
close in the first half of 2014.

“The truck business
has been an important part of our Company for more than three decades and
continues to produce world class products with dedicated and talented employees,”
said Ron DeFeo, Terex chairman and chief executive officer. “However, trucks no
longer fit within our changing portfolio of lifting and material handling
businesses. I am confident that the truck business will benefit by joining a
company sharing similar competencies and offering complementary products and
services. We are pleased to have entered into this agreement with Volvo, which
represents a strong strategic buyer for the business who values our
distribution network and team members.”

Commenting on the rationale of the deal Volvo CE’s
president, Pat Olney said: “This is a strategic acquisition that offers Volvo
CE considerable scope for growth. The addition of a well-respected range of
rigid haulers extends the earthmoving options for customers involved in light
mining applications at a time of renewed confidence in the sector. The addition
of TEL’s articulated hauler range will enhance our position in this segment,
particularly in high-growth markets. We believe that the Motherwell facility
and its global team members, as well as the current distribution partners, are
valuable to the success of the business in the future.”