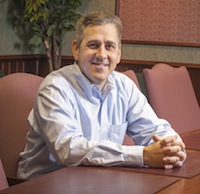 March 24, 2014, Hollidaysburg, Pa. – Sean McLanahan has been
named the new CEO of McLanahan after the decision was made to restructure the
company’s executive.

March 24, 2014, Hollidaysburg, Pa. – Sean McLanahan has been
named the new CEO of McLanahan after the decision was made to restructure the
company’s executive.

The corporation has decided to create a new global
organization structure that includes the restructuring of top-level positions,
as well as title changes within the executive management team.

As of the March 2014 McLanahan Annual Shareholder Meeting,
Sean K. McLanahan, who represents the McLanahan family’s sixth generation of
ownership, assumes the title of CEO. Fifth generation family-owner, Michael W.
McLanahan will continue in his role as Chairman of the Board, while George L.
Sidney, Jr. remains President and COO. Together, these three serve as
McLanahan’s executive team.

In addition to these title changes, the new structure
divides the corporation into three main areas – corporate shared services,
sales and business development, and business operations. Each area will be
managed by one of three Executive Vice Presidents.

McLanahan is currently recruiting for the third position,
Executive Vice President – Sales and Business Development. This position will
oversee all U.S. operations and global sites, as well as managing customer
relationships and new opportunities.

“This new global organization chart not only provides new
positions for 2014, but also insight into where we will be in 2020,” said Sean
McLanahan, CEO. “Segmenting the corporation into three main areas allows
employees to focus on their areas of expertise, while supporting our customers
and the global marketplace.”