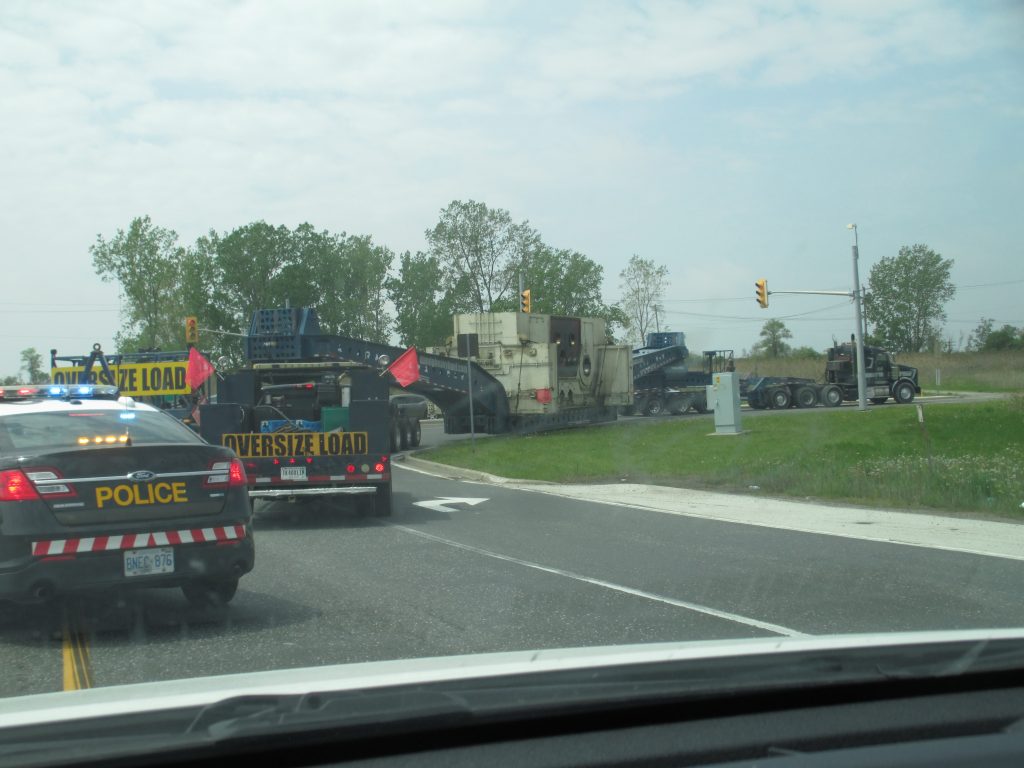 The Specialized Carriers & Rigging Association (SC&RA) have been busy on this side of the Canada-U.S. border, working with the Ministry of Transportation of Ontario (MTO) on the current phase-out of Ontario Provincial Police (OPP) escorts in the province for superload permit moves.

The phase-out began on July 1, 2018 with a contingency period offered, in which the OPP could fill in until there were an adequate number of newly certified escorts made available through the Certified Superload Escort Program. Effective January 1, 2019 the OPP will stop providing paid duty escorts to assist in the movement of oversize/overweight (OS/OW) superloads.

Steven Todd, vice-president of transportation with the SC&RA, says the program is the first of its kind in North America that will fully phase out police escorts.

“This is very unique new program and new policy,” he says. “It gave our industry an opportunity for the first time to give serious deliberation of replacing all police escorts as we know it.”

Todd said a similar program was run in Pennsylvania but it was on a much smaller scale, replacing a small number of police-required escorts.

“This is certainly the first time any government we worked with went the whole nine yards,” he said.

The SC&RA had its concerns about the new escort program at first; but after having the opportunity to deliberate with the MTO on how the program was being implemented, the association was far more comfortable.

Although the SC&RA is extremely satisfied with how the program is moving forward, it does have one remaining concern: the ability to request police escorts in extraordinary circumstances.

“We’re 99 per cent very satisfied,” Todd says. “In an extraordinary circumstance, in the interest of safety, I believe they would allow that. General motorists tend to respect red and blue flashing lights more than they do yellow.”

There are currently 116 SC&RA member companies across the country. Of those, about 40 of them are based in Ontario. Todd says this represents anywhere from 5,000 to 10,000 people across the country. The SC&RA is fully endorsing the new program and believes it will generate cost savings for its members operating in Canada.

“Not just in terms of what we would normally be charged by OPP versus private,” Todd says. “The real cost savings we’ll see is once this program gets stocked with enough fully trained pilots… we’ll be able to schedule and make these moves in a much more cost-effective manner.”

A shortage of trained escorts is currently the program’s biggest hurdle. To date, there have only been a handful of companies through the program and there are currently not enough escorts to meet demand in 2019. That said, business is expected to continue as usual.

“One way or another, we as an industry will correct that imbalance; if there is one,” Todd says. “We certainly won’t stand for not moving our loads.”

For questions or interest in the Certified Superload Escort Program, contact the Business Innovation Team at BIT@ontario.ca.

Permitting automation progressing
One of the SC&RA members’ biggest issues in Canada right now is related to a lack of automation within the permitting processes in Ontario for some Oversized/Overweight (OS/OW) permits and routine loads. Automation of certain OS/OW permitting processes has already been implemented in more than 30 U.S. States and interest in the process is continuing to grow south of the border. Automated permitting allows for an application to be received, analyzed, and if approved, issued instantaneously without human contact 24 hours a day, seven days a week.

Todd says that there is a consensus among the participating U.S. States that safety and efficiencies have improved thanks to the automation processes. These benefits, as described by both government officials and industry leaders, include:

• The average permit turnaround time (PTA) decreased from several days and hours to just minutes for most routine and some OS/OW permits;
• Nearly all U.S. States that have implemented automated systems report a moderate increase in total permits applications and issuance;
• Increased automated permit volume has proportionally increased revenues;
• Accuracy of permits has dramatically improved;
• A higher percentage of carriers have ordered, obtained, and travelled on State-issued permits following implementation of automated permit systems;
• Roadway safety for all motorists has improved;
• The infrastructure integrity, including the maintaining of bridges and overhead structures, has improved;
• As a result of moving to automated permitting, U.S. States are able to achieve staff efficiencies and reduce costs. Fewer people are required or less time is needed to review and process OS/OW permits, freeing up employees to handle customer service inquiries; and
• U.S. States have more flexibility with internal headcount issues.

Todd stresses that safety is improved as a result of automated permitting systems, and that the speed at which the permits are being processed reduces the temptation for operators to run without one.

“While we prefer to think everyone in the industry did things legally and in the right way, some carriers and crane companies will run without a permit,” he says, adding that this is often due to delays caused by the manual issuing of permits sometimes taking days or weeks. “Because time is money, it stands to reason that the longer it takes government to issue a permit, the greater the temptation by the carrier and their customer to run without a permit… carriers are far less likely to move without a permit if they know they’ll get their answer moments after they submit.”

The increased speed at which an OS/OW permit can be processed through automation is especially important for smaller operators and owners, that often only have time to order permits in the evenings, nights and weekends after their travels.

Todd calls the automation process a win-win-win scenario for all parties involved, including governments, industry and taxpayers. The SC&RA are stressing to the provincial governments in Ontario and Quebec that revenues increase in provinces and states that automate these processes.

“This allows governments to make more efficient use of their head count,” Todd says. “They’ll be able to reassign those people in the permit office that were spending time with routine loads, and now can be interacting more with industry on superloads or megaloads.”

The automated systems do come with a fairly hefty price tag, but they can pay for themselves fairly quickly.

“These systems can cost from $1 million to $2 million to implement,” Todd says. “However, we’ve found by adding a very modest of $1, $2 or $3 surcharge per permit, you’re able to pay off the cost of the new system and maintenance costs in a just a few short years, or less.”

Ontario is not the only province looking into the automation process.

Transports Québec has reported a commitment of full implementation of an automated permitting system within approximately one year, according to an SC&RA report published this past July.

Threshold harmonization
The new Certified Superload Escort Program isn’t the only issue keeping SC&RA staff busy in Canada. The association is also staying in close communication with utility Hydro One, which is working with some municipalities on harmonizing thresholds and signoffs between the utility and various counties in Ontario.

“Some municipal permitting processes don’t match up with the Ontario provincial policies,” Todd says, explaining that the majority of counties follow Hydro One’s recommendations, but there are some municipalities and counties that have much lower thresholds.

Todd says when a member enters a jurisdiction with a lower threshold unexpectedly; they can be faced with last-minute changes and thousands of dollars in additional costs.

“The biggest issue for us is the unexpected,” Todd says. “Our members, just like crane companies, bid out jobs several months ahead of time – my permits will cost this much, I’ll have a police presence here, but not there, I’ll move through the day here, and the night there… if we end up having to re-route last-minute [due to last-minute construction] through a local county with a different threshold for Hydro One then we can be delayed for days, if not weeks, and have all the costs involved.”

The SC&RA is working with the utility, counties and municipalities to lay the groundwork to move towards nearly 100 per cent harmonization.

The symposium brings together oversize/overweight transportation professionals and permitting officials to discuss permitting harmonization and safety concerns. Beyond education sessions, the meeting features an exhibit centre showcasing approximately 60 companies and many networking opportunities.