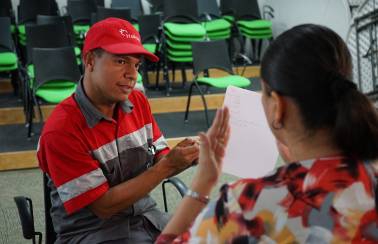 December 7, 2016 – Holcim Costa Rica is pioneering diversity and inclusion (D&I) in its workforce and is the only construction materials company in the country to publicly commit to increasing gender diversity and promote the economic empowerment of women in the organization.

The company is a leader in this area among LafargeHolcim Group companies globally. In 2013, Holcim Costa Rica implemented a program to promote and maintain a work environment that fosters D&I. LafargeHolcim believes that people of different cultures, generations, genders, ethnicities, nationalities and skills can help create value for the business based on open communication and respect. This ensures fairness and an environment free of harassment, discrimination and victimization.

The program in Costa Rica is organized around four major themes:

•Scope and vision: the human resources team was tasked with formulating a diversity & inclusion policy and adjustments were made to the Flexibility/Productivity Policy to include flexible working hours and the possibility of working at other Holcim work centers. Family-oriented measures were also undertaken: designated rooms for nursing mothers were established (one in the Cement Plant and one at Headquarters) while special talks were also offered to fathers and male employees that highlighted their role in childcare and family life.

•Workforce diversity: To foster gender diversity, female candidates who qualified for management positions were identified in succession planning and at least one woman applicant must appear on the candidate list for open positions. Leadership training was deployed to 85% of female employees.

•Accessibility: A group of expert architects was hired to assess disability accessibility at all workplaces. Improvements were made to parking lots, bathrooms, doors, safety equipment, as well as access and transit areas between buildings. Additionally, a matrix was developed that connected careers at Holcim Costa Rica and types of disability in the country, which opened up doors to interns.

Results so far show that 93% of Holcim Costa Rica employees surveyed were enthusiastic about the company’s D&I efforts, which serve as a positive example for LafargeHolcim teams around the world. The program fully supports the Group’s target of achieving a minimum of 30% gender diversity at all management levels by 2030.