Construction of controversial highway under consideration by Ontario government 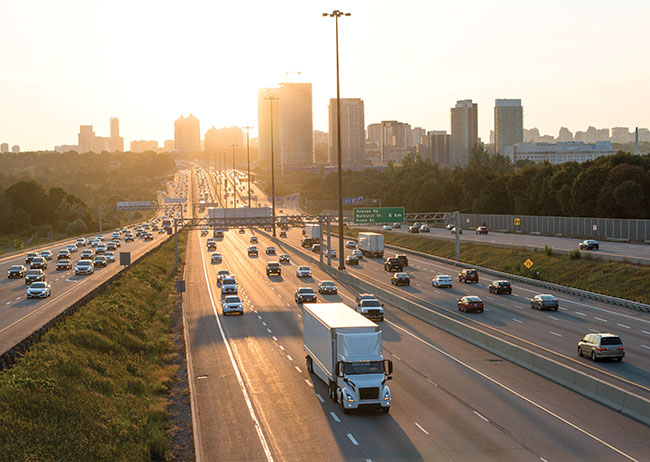 The Ontario government has given new legs to the idea of building a multi-lane, controlled-access outer ring road, known as Highway 413, around the built-up areas of Vaughan and Brampton northwest of Toronto.

The controversial mega-highway, also referred to as the GTA West Corridor, has been under consideration for nearly 20 years – by both the PCs and Liberals – but was shelved in 2018 by then Premier Kathleen Wynne.

Premier Doug Ford resurrected the $6-billion idea after winning the provincial election. In a fall economic statement in 2018, the PCs committed to their campaign pledge of resuming an environmental assessment (EA) for the roadway in order to speed up travel time and alleviate traffic congestion.

The PCs maintain a new highway needs to be built from Highway 400 in Vaughan in the east to the 401/407 interchange in Milton in the west because the population of the Greater Golden Horseshoe is growing.

The proposed highway would be a four-to-six-lane thoroughfare that runs for 52 kilometres through 2,000 acres of prime farmland and travels south of Bolton and Caledon and allow motorists to bypass much of Toronto.

However, the highway has been met with a number of roadblocks, including heavy criticism from politicians and the public who’ve expressed concerns about its impacts on the environment and farmland.

Environmental groups and municipalities have joined the growing chorus objecting to the thoroughfare.

Toronto City Council is opposing the plan, along with councils in Mississauga, Vaughan, Halton Hills and Halton Region, while those in Orangeville. Brampton, Caledon and Peel Region voted to call for a federal EA.

“The proposed GTA West Highway will have a disastrous impact on the environment, encourage residential sprawl and increase our dependence on cars,” Mississauga Mayor Bonnie Crombie said in a statement. “As a council, we’ve been so dedicated to trying to combat these issues, so we could no longer simply stand idle. Too many experts and organizations have come out against this planned highway, and today we stand with them.”

Environmental Defence, an advocacy organization that works to defend clean water, a safe climate and healthy communities, has been particularly outspoken in its opposition to the highway and maintains the corridor will have “significant impacts” on endangered species, migratory birds, aquatic life and wetlands.

The group released a report, called Paving Paradise: The Impact of Highway 413 on Greenhouse Gas Emissions, Air Pollution and Urban Sprawl, that maintains the highway will increase greenhouse gas emissions, escalate suburban sprawl, and cause billions of dollars in damages from heightened air pollution in nearby communities.

Vehicles using the highway will contribute 700,000 tonnes of greenhouse gas emissions annually, leading to a cumulative total of 17.4-million tonnes of emissions by 2050, according to the group’s report.

“Transportation emissions have been rising in the GTHA for years,” said Sarah Buchanan, Ontario climate program manager at Environmental Defence. “The province’s plan to build the multi-billion-dollar Highway 413 will make this worse by putting more cars on the road. Ontario’s climate change targets to reduce emissions are already a distant hope, but encouraging more driving and suburban sprawl will make them completely unattainable.”

The project came under more fire, meanwhile, after The Toronto Star ran a story under the headline, “Friends with Benefits,” that inferred builders were getting special favours from the Ford government as a result of the proposed highway. Several media outlets piled on and ran editorials opposing the highway.

The province is pushing for the highway because the population of the Greater Golden Horseshoe is expected to grow to 14.8 million people by 2051 and will be in need of better transportation infrastructure. The highways in York and Peel regions are expected to be operating over capacity by 2031.

A poll commissioned by the Ontario Provincial District Council of LiUNA indicates there is substantial support for the highway. The survey revealed that before a range of attributes about the new highway were introduced, 57 per cent of the 6,050 respondents surveyed across the province supported the idea while only 23 per cent were opposed.

Even after informing voters of environmental concerns raised by the opposition, the poll revealed that 55 per cent still expressed support while 26 per cent were opposed.

Overall support for the highway is highest in the GTHA, ranging from a low of 57 per cent in Toronto to high of 67 per cent in Peel and Halton regions. 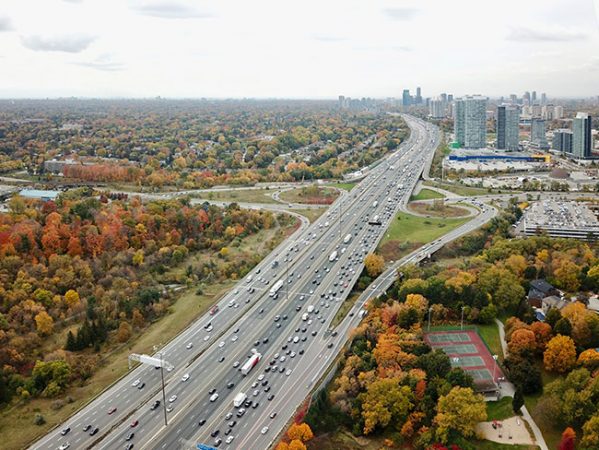 The proposal of the new Highway 413 has been met with a number of roadblocks, including heavy criticism from politicians and the public who have expressed concerns about its impacts on the environment and farmland. Photo credit: © Aitor / Adobe Stock.

Support for the highway is very high across party lines and especially with PC and Green Party voters, according to the poll, with 66 per cent of PC voters backing the highway, and 60 per cent of Liberals and 54 per cent of NDP voters offering support.

Environmental Defence and its supporters who oppose the highway called for a federal EA which could delay the project for years. The group is supported by Ontario Nature, Transport Action Ontario, Sierra Club Peel, Halton Environmental Network, Oakvillegreen, Sustainable Vaughan, and Oak Ridges Moraine Land Trust. They want the EA to examine the impacts of the highway and determine if there are more sustainable alternatives.

The environmental groups got their wish recently when Climate Change Minister Jonathan Wilkinson decided to designate the project under the federal impact assessment process, as it might cause adverse direct or incidental effects on federally-listed species.

The decision, he said, was made after careful consideration of the available science, evidence and other relevant information gathered by the Impact Assessment Agency of Canada (IAAC).

“The Impact Assessment Agency of Canada and other federal departments have identified clear areas of federal concern related to this project,” he stated. “My decision is based on their finding that this project may cause adverse direct or incidental effects on federally-listed species at risk, and the uncertainty that officials have brought to my attention around whether those effects can be mitigated through project design or existing mechanisms.”

So, for now, the brakes have temporarily been tapped on the province’s efforts to fast-track the controversial project. The province must now submit an initial project description that, once accepted, will begin the planning phase of the impact assessment process through which the IAAC will be able to decide whether a full federal impact assessment is required.

Should the IAAC decide that a federal impact assessment is warranted, “we will endeavour to work with Ontario to carry out a coordinated and predictable assessment that Canadians can have confidence in,” Wilkinson stated.

The idea of the highway was first floated two decades ago. The Liberals started an environmental assessment on the proposed highway land in 2008 and the first phase of the review was completed. However, in 2015 they halted the process and convened an expert panel to assess the project. The panel recommended it be scrapped because evidence failed to show a new highway was the best or only option.

Environmental Defence, for one, has applauded the federal government for stepping in and taking action.

“Minister Wilkinson has listened to the concerns of local citizens along the proposed path of Highway 413, and the unanimous voice of local governments who supported this request for a federal environmental assessment,” said Buchanan. “Impacted people and governments don’t want to see the province spend billions to destroy critical farmland, portions of the Greenbelt, wetlands, forests, and endangered species, when experts have told us it will only save an average of 30-60 seconds per trip.”