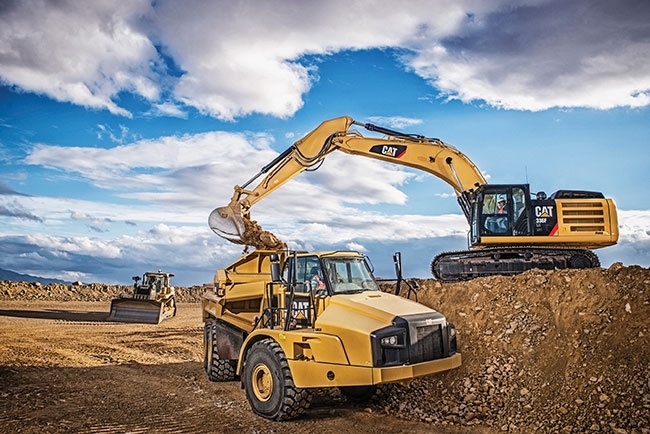 Officials claim that owners of the Cat 336F L-LN Hybrid Hex excavator can expect a return on their investment in as little as one to two years.

Hybrid heavy equipment is starting to make inroads in the North American market – and with good reason.

“The hydraulic hybrid system is a simple, reliable, and cost-effective solution that helps production-orientated customers significantly lower their overall owning and operating costs,” says Caterpillar Excavator product specialist Brian Stellbrink. He adds, “The hybrid machine will deliver the same power and industry-leading level of performance and productivity as the standard machine. Quite simply, customers can expect it to do the same amount of work, but do so using far less fuel.”

Those who purchase the Cat 336F L-LN Hybrid Hex excavator (the company’s only hybrid offering at present) can expect a return on their investment in as little as one to two years compared to a similar standard offering. “This rate of return is obviously dependent on many factors such as the number or hours, application and the price of fuel,” Stellbrink notes. “For customers working in high-hour, high-production applications, the return can be very quick. For others, the return may take longer, and one of the key reasons we continue to offer both hydraulic hybrid and standard machines.”

In terms of operation, running the Cat hybrid excavator is exactly the same as a standard machine. “There is no special training or change to operating technique to be productive, even for the most experienced operators,” Stellbrink says. “Furthermore, our hybrid technology does allow the opportunity to enhance operator performance by tailoring some control settings to match operator preferences. For example, with our latest hybrid excavator, the joystick lever gain and swing braking can be optimized for certain applications, if desired.”

Maintenance intervals are also very similar whether you have Cat’s hydraulic hybrid or standard excavator, except that the hydraulic hybrid has energy-storing “accumulators.” However, accumulators have a long service life, similar to the hydraulic cylinders used throughout working end of the machine. “Furthermore, since our hybrid solution remains hydraulic, service technicians require very little, if any, specialized training,” Stellbrink notes.

The three main technologies used in the Cat hydraulic hybrid system include the Cat Electronic Standardized Programmable pump, which provides power only when needed, while conserving fuel by smoothly transitioning between hydraulic hybrid power sources, engine, and accumulators. One of the other main technologies is the Cat Adaptive Control System valve, which optimizes performance by intelligently managing restrictions and flows to control machine motions. This valve directs hydraulic power to the machine functions precisely where and when it is needed to maximize performance and fuel savings. Lastly is the Cat Hydraulic Swing System. “Instead of wasting kinetic energy during swing braking, the Cat Hydraulic Hybrid Swing System pressurizes the accumulator to help decelerate the swing and then uses that stored energy to help accelerate the swing function when needed,” Stellbrink explains.

Komatsu gets involved
The Komatsu HB215LC-1 is another purpose-built hybrid excavator available in North America. This machine saves an average of 25 per cent on fuel with an equivalent reduction in CO2 emissions compared to the company’s standard excavator model.

Where a standard model uses a brake to stop the load when the upper structure, boom, arm and filled bucket are swinging, a Komatsu hybrid excavator uses an electric swing motor to capture this energy and store it in the ultra-capacitor assembly. The ultra-capacitor is capable of storing and releasing more energy than a battery – and releasing it more quickly as well, says Komatsu America product manager Rob Orlowski.

And speaking of that performance, Orlowski says surprised users often tell Komatsu how exceptional it is. “The electric swing motor is on a separate circuit from the other hydraulic functions and customers comment on the extra speed, especially during multi-function work,” he notes. Another difference that customers will notice is noise. Operation (and maintenance as well) of the HB215LC-1 is the same as any standard excavator, but it’s markedly quieter during both routine and challenging tasks. Orlowski says there are attractive incentives available from dealers.

Officials claim that owners of the Cat 336F L-LN Hybrid Hex excavator can expect a return on their investment in as little as one to two years.

Deere’s hybrid solution
Like the hybrid excavators on the market here in North America, the 664K hybrid loader from John Deere is a fuel saver. It is the only hybrid model currently offered by the company, and provides 25 to 40 per cent improved fuel efficiency, depending on the type of application the customer performs. In comparing the conventional and hybrid models, power capacity, operation and maintenance are all very similar.

The 664K loader has an electric generator, electric motor and inverter to make the wheels turn, instead of a powershift torque converter transmission tied directly to the engine (as is found in a conventional loader of the same size). ”The John Deere dual inverter system does the work of both a generator control and traction drive control in one box,” explains product marketing manager at John Deere Construction & Forestry, John Chesterman. “The inverter controls load management for the electrical system, so there is always power available when you need it.” The hybrid system eliminates the need for a mechanical connection between the engine and the wheels, thus allowing for constant engine speed, which both saves fuel and increases durability. The 644K Hybrid allows full hydraulic power available at nearly all operating conditions since the engine is running at constant speed.

Because the engine runs at a constant level, a smaller, more efficient engine can be used. “Additionally, a constant speed engine will have a longer life than a conventional engine that runs at full torque from low to high speeds,” Chesterman notes. “In a conventional drive wheel loader, the power capacity varies from low idle to high idle, while in the Hybrid, the diesel engine is already at [a] higher engine speed near its power peak and is already incredibly responsive.”

The electric loaders and generators in the 644K are oil-cooled, which means they won’t get fouled with dust and debris like air-cooled electric motors often do in a quarry environment. “On our machine, we have eliminated the risk of that,” Chesterman says, adding that the electric loaders and generators are also integrated into the machine’s Quad-Cool cooling system. These components, along with the hybrid drive system, will likely outlast the machine.

In terms of performance, Chesterman says everybody who uses the 644K “is usually blown away at how easy it is to operate.” In the cab, there are only two buttons that are different from a conventional machine. “For a below average operator, it is much easier to get a bucket load in the 644K as the machine has extremely strong pushing power,” Chesterman adds. “In the conventional drive loader, the operator would control the engine speed with the accelerator, which would change many other factors.” The accelerator in the Hybrid simply controls how hard the machine pushes and how fast it will travel, he notes. “Electric motors generate their maximum torque at near zero speed, so it’s easy to make the machine push into a pile.”

One other company has entered the hybrid market, but has not found its way to Canada. Hitachi makes a hybrid excavator (the ZH200-5B), but it is not available in the North American market at this time.

Without question, as the hybrid option gains popularity as an eco-friendly alternative to diesel-powered excavators and wheel loaders, we are likely to see more companies like Caterpillar, Komatsu, John Deere and Hitachi introduce hybrid heavy equipment for the Canadian rock to road industry.