Aggregates company is still doing brisk business - even hiring - but the way it operates has changed, says Bob McKinnon 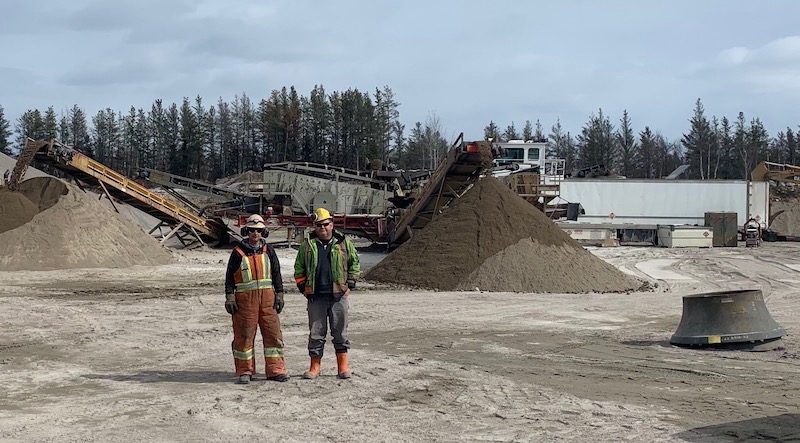 Bob McKinnon (right) at the job site in Red Lake, Ontario. With him is Chris Anderson, a crusher foreman at Gilbertson Enterprises. Photo: Courtesy Bob McKinnon

Bob McKinnon answers his phone, and there’s a big racket going on around him.

Electronic beeps, the sound of passing cars and other indistinguishable sounds reverberate through the phone line. It’s chaos.

“Just let me get back into my truck,” said McKinnon, a crushing supervisor at Gilbertson Enterprises. It’s an aggregates firm based on St. Joseph’s Island in Ontario.

The truck is his solace, a four-wheeled fortress of solitude that drowns out the outside world.

As the line quiets down, he talks about the 14-hour drive ahead of him to the northern Ontario community of Red Lake, not far from the Manitoba border. He gets a new truck every two years, so the ride is comfortable — if long. And he’s done trips like it many times over the years with construction projects across the province.

What happens in Vegas

In early March, McKinnon and members of his team travelled to Las Vegas to attend ConExpo/ConAgg, a massive tradeshow that was expected to draw in the neighbourhood of 130,000 attendees from around the world.

In the past, his company would send one employee. This year, it decided to go all out and send four. That event was one of the last major conferences to take place in North America, and it shut down early as the reality and scope of the COVID-19 pandemic came into focus.

“The biggest thing was the fear that infected our company,” he said.

The team that went to Vegas all thought they had symptoms of the coronavirus after coming home.

“If you had a sniffle, you thought you had it,” he said. “We lost nine guys overnight (to quarantine and self-isolation) in the crushing area — that was 20 per cent of our team.”

McKinnon, a crushing supervisor, said there were two very viable reasons why workers stayed home. First, some had a spouse or family member with a underlying condition that made them more susceptible to serious complications if infected. Second, because there is so much travel in the job — like the 14-hour trek he was beginning — there was concern about being exposed.

While none of the workers tested positive, the company made changes to policies and on how work is being done.

Gilbertson has yet to lay any workers off, but it did have employees voluntarily ask to be put on layoff. Granting that was something new for the company.

“We understand everything that everybody is going through.”

On the day of our interview, McKinnon went to a management meeting — and social distancing to the extreme was taking place.

“Everybody’s 20 feet apart, not six feet apart. It’s pretty hard to do a roundtable,” he laughed. “We can do it on the phone to a certain extent, but we like to keep our meetings private. We don’t even take our phones into the meeting.”

No decline in business

Business is booming, and Gilbertson has even hired employees to cope with a high workload and a temporary absence of employees.

“The new jobs are not temporary,” he said. “We were shortstaffed going into the winter, and we got a couple of quality guys that had just lost their jobs before COVID-19 started.”

Because their sector has been deemed essential by the province, they are able to keep working. The government is still putting out contracts, awarding contracts and there is a lot of concrete being poured, he said.

A change in philosophy

On the HR side of things, he said there has been a lot more empathy.

“People are a little more cognizant of their feelings, of why they need a layoff or a day off,” he said.

“People have family. They may have an emergency — a guy comes to work and the kids are still at home, and suddenly everybody’s having a meltdown and he’s like ‘I’ve got to go home.’ You’ve got to let them go home.”

Some staff have elderly parents and they have to do shopping, which can be difficult if they’re working a 12-hour shift.

“They may need to leave a couple of hours early, but guys are covering for them,” said McKinnon. “I’m surprised at how everybody is pitching in for the company and for each other.”

What to do on days off?

One thing that concerns McKinnon is that people are starting to lose a bit of hope for the future.

“It’s like yah, you can go to work, but what are you going to do on your day off? You can’t go camping. You can’t go on vacation,” he said. “How long is this going to go?”

A lot of the employees work two weeks on, one week off — and the options for that one week off are limited with everything shut down and orders to stay home as much as possible.

Gilbertson is doing what it can to help, though its hands are tied by reality.

“We can’t throw a morale boosting party,” he said.

Instead, it is focusing on trying to get its workers a bonus so that when things do open up, they’ll have money to go do something.

With layoffs so rampant, even though his workers are still receiving a paycheque he knows many of their spouses aren’t.

“Everybody is hurting overall and the morale is down,” he said.

He finds some workers are welcoming a return to work after being home for one week.

“It’s stressful on them, they want to come back to work because it’s easier,” said McKinnon.

He dispenses advise to the team, like going for walks with the “wife and kids and spending time that you’ve never had before.”

“I’ve already had stuff in my life. I’ve had cancer, so every step you take past that is another day in life,” he said.

“In construction work, it’s high stress. There is high demand, high physical activity and tempers flare up. But you can’t have a temper in this. You can’t get upset, and guys are really stepping up to the plate.”

All in this together

McKinnon points out that everybody on the team is really in the same boat.

In fact, McKinnon said himself — as a supervisor — might have it the worst, because he hears gripes about it from workers below him and the owner above him.

“Which is alright, really, because my boss is more or less my best friend,” he said. “We get along really good.”

The company has also been restricting access to the public for its workers when they’re on the job.

“We don’t want you going into corner stores,” he said. Instead, Gilbertson ensures almost everything is available on the job site. In the past, workers would get up and go have breakfast at a local restaurant and eat lunch out as well.

“Now, we make all the guys’ meals on site and have all that stuff available,” he said. “Maybe not the snacks or the Red Bull or whatever the guys want to buy extra, but juice and water is on site and available. It has worked out pretty good.”

There is a bit of frustration in McKinnon’s voice about all the help coming from the federal government. Companies that have been hit hard are getting help, but employers like Gilbertson have been left in the cold.

“We know that it’s costing us 10 per cent more to run our business,” he said.

“And the government is not going to help a company that is trying hard to keep people working.”

If Ottawa could help with the cost overruns, perhaps via a tax break, the money would go right into the pockets of employees, he said.

“Pass the 10 per cent to employees. The guys that are making money are the guys that are going to be spending it on construction, buying trucks and at restaurants,” he said.

You can hear in his voice that he wants to give staff a bonus when this is all said and done to thank them and help jumpstart the economy.

There will undoubtedly be changes in how business is done in the future as a result of the pandemic.

“My boss is 80 and he can see that overall the whole way of doing business is going to change,” he said. “It changed in the depression and it changed after 2007-2008, and it’s going to change again.”

Hygiene is top of mind at the moment — not just in offices but also out in the field.

“If you get out of the truck and don’t wash your hands before you get in any piece of equipment, you’re fired,” he said.

“We have to remove you from the site because we don’t know what’s on your hands.”

“We’re a hot seat change out operation,” he said, meaning the machinery never really stops — just the operator does. “That’s going to change.”

There is now 20 minutes of down time at shift change. Before COVID-19, it was literally seconds — the time it took one worker to get out and the other to get in.

“You might think it’s overkill, but if something happens — and we didn’t follow the rules — we could be in serious trouble,” he said.

“As long as COVID-19 doesn’t have a vaccine, that’s what is going to happen.”

It means losing a third of an hour’s production twice a day — so you lose two-thirds of an hour over 24 hours.

“Add that up over a year over five crushers, and it’s a lot of money,” he said. “But one COVID case and we have to shut the whole thing down.”