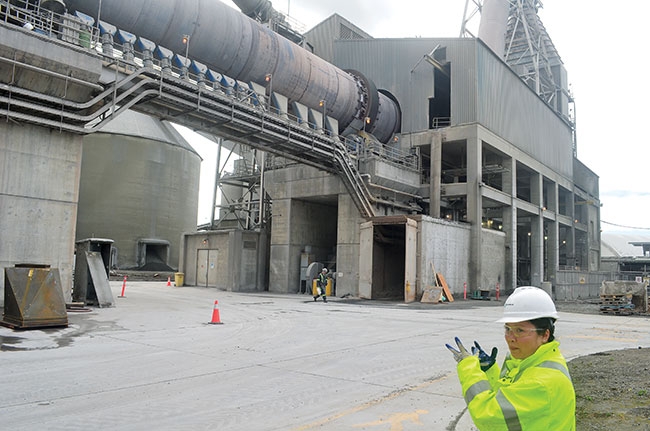 At LafargeHolcim, sustainability is a serious issue. The global building materials manufacturing giant created the LafargeHolcim 2030 Sustainability Plan in support of UN “Sustainable Development Goals” for the planet. The company aims to use more than
60 million tonnes/year of waste-derived fuels by 2020.

In Canada, the company has been hard at work retrofitting its various plants across the country to help reduce their carbon footprints. One facility Lafarge has been particularly busy working on is the Richmond Cement Plant. This plant is particularly special for Lafarge.

“It was the first plant Lafarge built outside of Europe,” Stephanie Voysey, Lafarge’s environment and public affairs manager for B.C. points out during a tour of the Richmond plant.

Despite being 60 years old this year, the plant remains a busy facility, operating 24 hours a day in two 12-hour shifts with 95 employees.

“A little over one million tonnes of cement is produced per year [at the plant],”Voysey says.

Pilot project
Ten years ago, Lafarge Canada started up a pilot project that allowed the Richmond plant to add low carbon fuel materials to its cement production. Over the past decade, construction and demolition waste, wood waste, non-recyclable plastics, and nylon fibres (from tire recycling) have been used to fuel the plant’s cement production. The system has an alternative fuel capacity of approximately 40,000 tonnes per year.

“In the past 10 years, Richmond has worked up to 26 per cent [low carbon fuel materials], but we’re kind of at a standstill,” Voysey says.

To increase the amount of low carbon fuel materials the plant can accept, Lafarge Canada is building a $20-million alternative fuel co-processing platform, with some of the financing paid for by climate innovation grants from the Federal Government’s Department of Natural Resources and the Government of B.C. The new system is currently under construction.

The new system is expected to process approximately 100,000 tonnes of low carbon fuels materials annually that was previously destined for landfills.

Highlights of the system include a large storage hall; a completely enclosed system; a belt conveyor feed to the precalciner system; a weigh feeder dosing system; and an advanced screening system; a quick offloading system of materials; a world class fire suppression and explosion protection system; and fireproof materials and waste segregation.

To ensure the plant has enough non-recyclable materials to fuel the new system, LafargeHolcim’s waste management subsidiary, Geocycle, has signed contracts with industrial companies and municipalities from various residential, industrial and commercial sources across B.C.to accept low carbon fuels such as non-recyclable plastics that were destined for landfills or export markets. The lower mainland is the main supplier of the low carbon fuel materials. Construction of the new system is expected to be complete in late 2018.

The process
First, the proper proportions of silica, alumina, iron and lime are mixed together to create a raw mix and are milled. The raw mix is then processed through the preheater/precalciner tower and kiln to heat it to 1,450°C. The low carbon fuels are then added in the kiln’s precalciner and the kiln itself where flame temperature can reach close to 2,000°C. The precalciner can accept larger low carbon fuels particle sizes than the kiln (up to 1” minus, compared to 3/8” minus in the kiln); can handle some contamination from oversized materials and metal that gets through, as well as higher moisture content than in the kiln, where little moisture and no contamination are necessary. The low carbon fuelsare pre-shredded and trucked to the plant in trailers, and are then transported via the belt conveyor feed system to the precalciner and via a pneumatic line to the kiln.

Stephanie Voysey, Lafarge’s environment and public affairs manager for B.C., discusses the $20-million alternative fuel co-processing platform being constructed during a tour of the Richmond plant.

Additional projects
Built in 1956, the plant has required various retrofit and reconstruction projects over the years to remain competitive and align with constantly changing federal, provincial and municipal environmental and safety legislation. One of largest upgrades at the plant took place in 1999, when the plant’s original two wet kilns were replaced with a preheater/precalciner kiln and a vertical raw mill (VRM) as part of a massive upgrade. The implementation of a VRM allowed the plant to significantly reduce its production of sulfur dioxide (SO2). The plant currently emits less than 100 mg per cubic metre of SO2 – well under the legal limit of 450 mg per cubic metre. Continuous emissions monitors are in place on the stack, and Lafarge Canada conducts quarterly compliance tests to ensure everything is working properly and in compliance.

In 2017, Lafarge Canada and Metro Vancouver signed a three-year agreement for Lafarge Canada to accept drinking water treatment residuals from the Seymour Capilano Filtration Plant for use in cement manufacturing. The agreement was for a minimum supply of 10,000 tonnes per year of residuals from the water treatment process, which are a combination of sediments and naturally occurring elements from the source water, and treatment chemicals. The residuals contain a chemical profile similar to red shale, one of the raw materials used in the cement manufacturing process. By using the residuals, less virgin raw material is mined, and the residuals are kept out of landfills. Much like Lafarge Canada’s low carbon fuel system, this agreement is a winning scenario for all parties involved, and the environment.