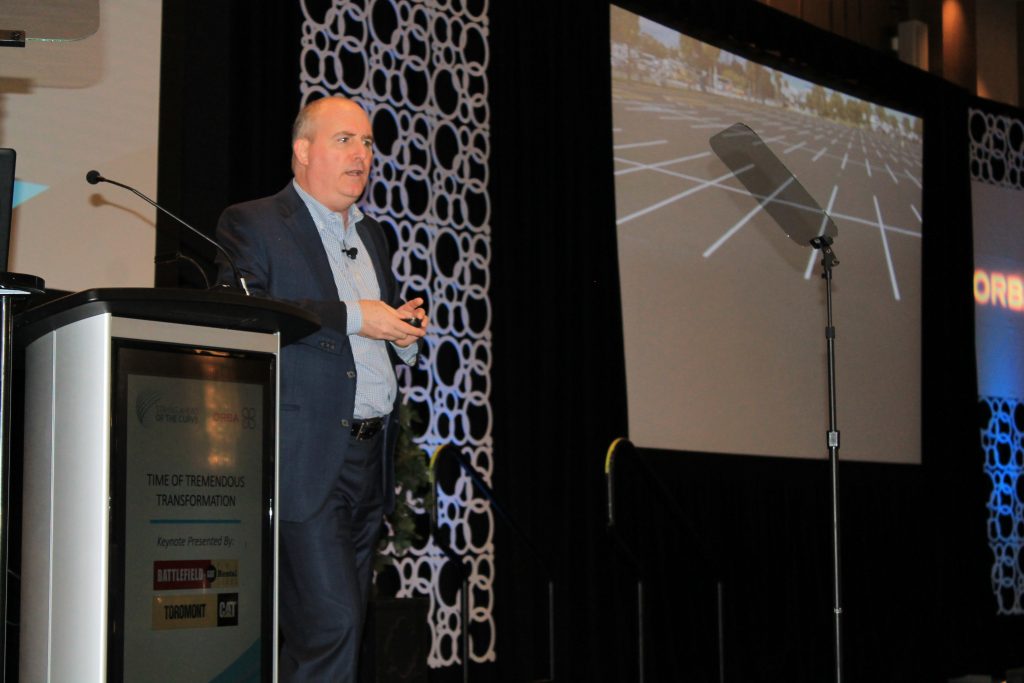 Toronto – The Ontario Road Builders’ Association (ORBA) titled their 2020 conference “Staying Ahead of the Curve” and kicked off the summit with a talk led by Jim Harris, one of North America’s foremost management consultants, public speakers, authors and thinkers on change and leadership.

The conference was held at the Fairmont Royal York hotel in Toronto, Feb 2-4. Harris pointed out trends that the construction and aggregate industries are used to seeing and following are in the middle of changing, or have already. He talked about products like cameras, and services like hotels, Airbnbs, and taxis to drive his point home.

“We all know about Kodak,” he says. “It had all the patents for digital photography and was the top selling brand for years in the digital space. But there’s been a shift and we’re not buying cameras anymore.” Harris explained the smartphone came out and rapidly changed the way average consumers use a camera. “My smartphone camera can take pictures better than many off-the-shelf consumer cameras can. Why would people need both?”

Harris explained that it’s sudden, disruptive innovations that can turn an industry on its head before it‘s realized. He showed a YouTube video of two pit crews changing a race car’s tires to show how an industry can change even when it seems impossible. A clip from the ’50s showed one man taking 67 seconds to swap two tires, and the other showed a modern-day team swapping all four tires in two seconds.

“After seeing the first video, if someone had told you it was possible to do more work, in less than two seconds, you would have said it was impossible,” says Harris. “How much change is possible in the construction industry? This is my question to you.”

Harris asked the crowd to think about what the construction industry could do differently that would have a profound impact on how we work. And added that the disruptors, and the companies that follow the disruptors, are likelier to make it. 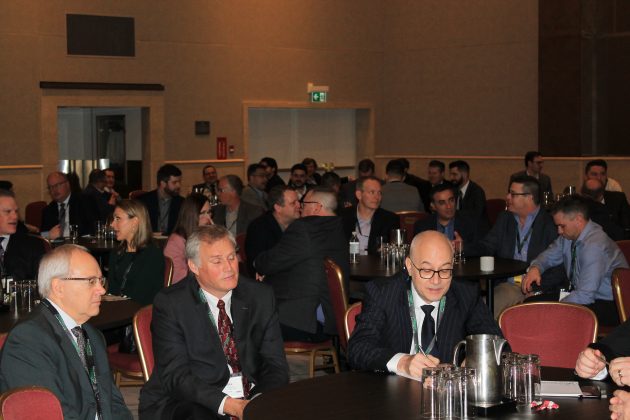 The audience at the ORBA 2020 Conference and AGM. Jay Koblun

“Industries change whether we like it or, it all depends on how we adapt to those changes. And is your company following and making those changes or are you falling behind?”

Harris brought up self-driving automobiles and said North America will see more of these vehicles on the road within the next 10 years. He tied this disruption to the roadbuilding industry specifically by explaining what may happen to the need for parking lots when companies such as Uber or Lyft get involved.

“By 2022 electric vehicles on average will be cheaper than gas powered cars to purchase in North America, and autonomous vehicle fleets will deliver transportation as a service. Given the rise of autonomous fleets, it is estimated that there will be 61 billion square feet of excess parking in the U.S. alone,” he said.

Uber is a platform where those who drive and deliver can connect with riders, eaters, and restaurants. In cities where Uber is available, you can use the Uber app to request a ride. When a nearby driver accepts your request, the app displays an estimated time of arrival for the driver heading to your pickup location.

“What happens to the value of parking and parking lots when everyone is using self-driving vehicles?” he asked. “What do you think I will do with my self-driving vehicle after it drives me to my office downtown? I’m definitely not going to spend $40 to park it in a parking lot. No, I’m going to put it to work for me, turning it into a self-driving Uber for the day and tell it to pick me up at 5 p.m. when I’m done work.”

Harries said similar situations will cause a dramatic and sudden decline in the need of parking lots. He said these types of innovations and disruptions seem impossible or far off, but brought it back full-circle to the clip of the race car driver’s tires from earlier. Reminding us that changing more tires in less time seemed impossible at first.

Harris finished the talk by comparing disruption to the life cycle of an avocado. Saying that the window of a ripe, enjoyable avocado comes quickly, unexpected, and once it’s gone, it’s gone.

“You buy one of these avocados. And is it ripe? No, not yet. And you check it tomorrow. No, it’s still really not good. Check again—not yet. Now? Oh yeah. Eat me now. OK, now it’s too late,” he says. “And that’s really what disruptive innovation is like. It’s kind of below the radar for so long and you can ignore the warning signs at your own peril.”

Harris said it’s important to pay attention to the signs of a changing industry to help a company stay relevant and remain ahead of the curve.