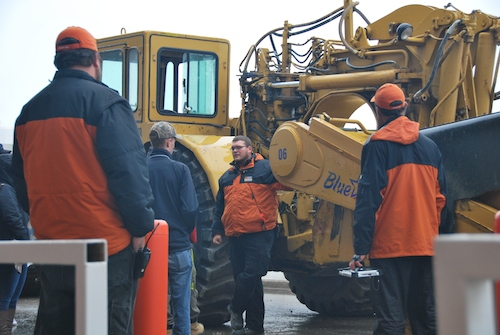 Attendees of the Careers in Heavy Construction Expo are given a tour of Ritchie Bros. Auctioneers facility in Bolton, Ont.

Oct. 28, 2016 – Nevermind Halloween, there are frightening numbers out there when it comes to the skilled trades workforce in Canada. The Conference Board of Canada expects a whopping one million skilled workers will be needed by 2020.

While that is a worrisome number for employers of skilled workers, it was an encouraging number for attendees of Rock to Road’s Careers in Heavy Construction Expo, held yesterday in Bolton, Ont.

Ritchie Bros. Auctioneers Bolton facility hosted the keen participants of the career day, who braved winter’s first wallop in Southern Ontario to learn from the diverse line up of speakers and sponsors.

Participants learned not only about the upcoming workforce gap, but also that tradespeople, on average, earn salaries that are 3.1 per cent higher than the average of all other careers combined in Canada.

Darryl Ormiston, apprenticeship liaison officer with Centennial College School of Transportation, who shared that statistic with the audience, was one of four post secondary representatives who offered guidance to the participants and encouraged them to explore their options at college or university.

But schooling isn’t the only avenue to secure a meaningful career in the industry. Ryan Pottruff, territory manager for Ritchie Bros. Auctioneers, shared his story about how he found employment in the heavy construction industry in sales. Pottruff was an NHL draft pick for the Carolina Hurricanes in 2004 and explained that he had no experience when he approached Ritchie Bros. for a job.

“I just went and was myself,” Pottruff said. “They are just looking for good people who can demonstrate leadership, hard work and dedication. It’s about who you are as a person.”

Amma Wakefield, senior materials engineer for Aecon Material Handling, chose the schooling route for her highly specialized career, and emphasised the importance of finding satisfaction with your work. “Be curious,” she said. “I’m passionately curious about this industry and that’s what drives me.”

Taking advantage of co-ops and internships was a common theme for several speakers. Getting your hands dirty on the job is when students learn both hard and soft skills crucial to becoming valued employees.

Ritchie Bros. provided attendees with a tour of the facility to see first-hand the heavy equipment on site. Another highlight of the day was a drone demonstration from GeoShack.

For two lucky attendees, Hamza Shalghoum and Hui Ou Wu, the day wrapped up perfectly when their names were drawn for the two $500 bursaries, courtesy of Strongco and Wajax.

Attendees of the Careers in Heavy Construction Expo are given a tour of Ritchie Bros. Auctioneers facility in Bolton, Ont.