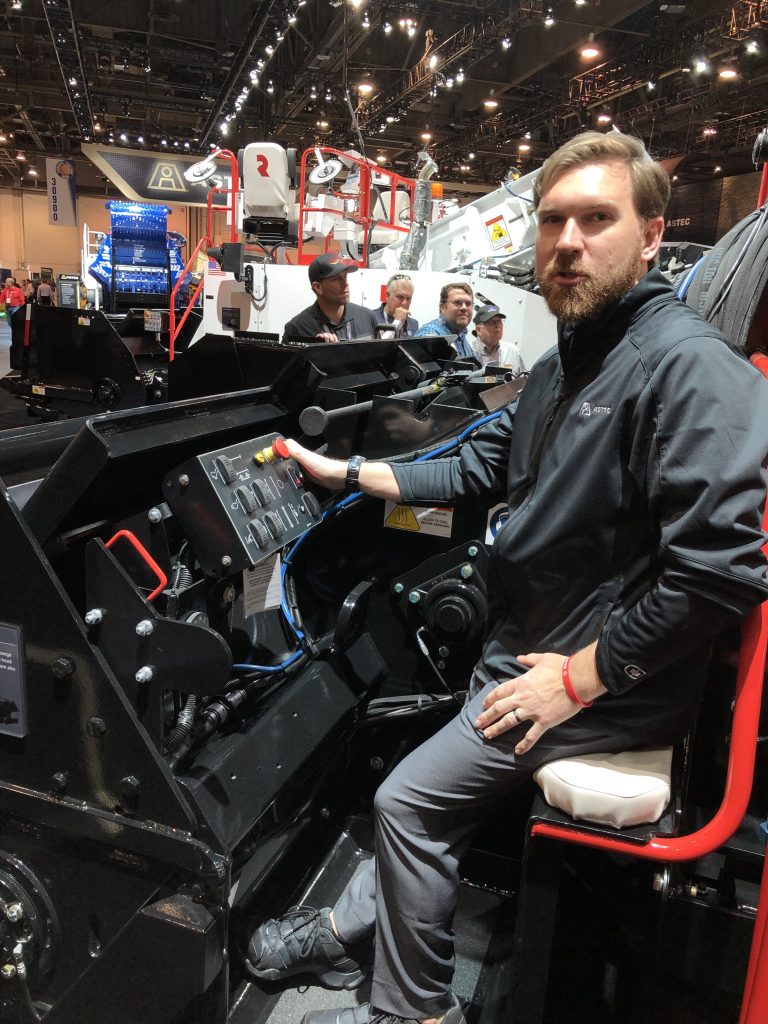 Astec Industries had a wide variety of new equipment on display, and Rock to Road had the opportunity to hear more about a few of the new releases.

Kyle Neisen, product manager for Roadtec, said it was time for a makeover of the old Shuttle Buggy, which had not been significantly updated in some time.

“The Shuttle Buggy 2500 has been our staple in the industry for a long time,” Neisen said. “We really felt there was a big opportunity to revamp it and make a better machine. We did a lot of homework and talked to a lot customers.”

The company spent years collecting input from their contractors to ensure that lots of operator input was put into the design of the SB-3000.

That contractor fuelled input led to several new features, including its 4-wheel steer for easier maneuvering on job sites with small footprints; a seated operator station located inside the machine for increased safety of ground operators; a place for operators to store truck tickets; a clean out tool holder; and shovel holders.

At KPI-JCI & Astec Mobile Screens, some impressive changes were made to the Kolberg-Pioneer Hybrid FT4250CC impact crusher. The unit now has an added prescreen in the feeder and features the company’s new patented hybrid diesel-electric technology (440hp diesel/400hp electric).

Astec’s Daniel Filsinger said that one of the big benefits of being able to switch between electric and diesel is being is for dirtier crushing applications.

“If you’re crushing asphalt, for example, running off electric you don’t need to worry about clogging up the Diesel engine,” he said. “It also helps in areas with high noise and emissions regulations. But it’s also a good machine for everyone, because it’s cheaper to run.”

The K350+ Kodiak Plus Cone Crusher was also on display. One of the big advantages of this model is that it can be swapped into a chassis with a K300+ with relative ease, offering an operator more power in the same footprint. 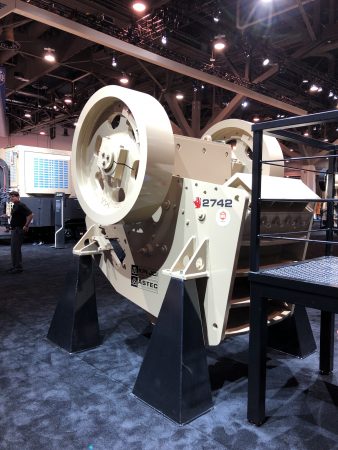 The K350+ Kodiak Plus Cone Crusher can be swapped into the same chassis as a K300+ with relative ease.

Another interesting display at the booth was the company’s water clarification system, which allows producers to manage their wastewater more efficiently.

“The typical way to handle that is to put it in a settling pond on site,” he explains. “Those are really costly to maintain,  sometimes you have environmental issues that pertain to those, so we have a new product offering that help you manage that and recover up to 95 per cent of that water.”

The new water clarification system’s process involves adding flocculent to the wastewater to help stick the waste particles together and settle at the bottom of a tank. That sludge that forms can then be placed in a filter press, with the press recovering additional water from the sludge. 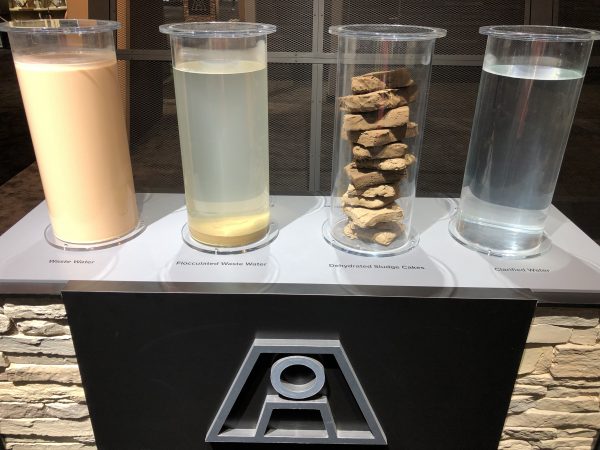 “You get these nice, manageable-sized pieces that we would call “sludge cakes” that you can scoop up with a loader, put in a truck, use as backfill and very easily manage; and of course, you also get clarified water at the end of the process to put back in your system.”