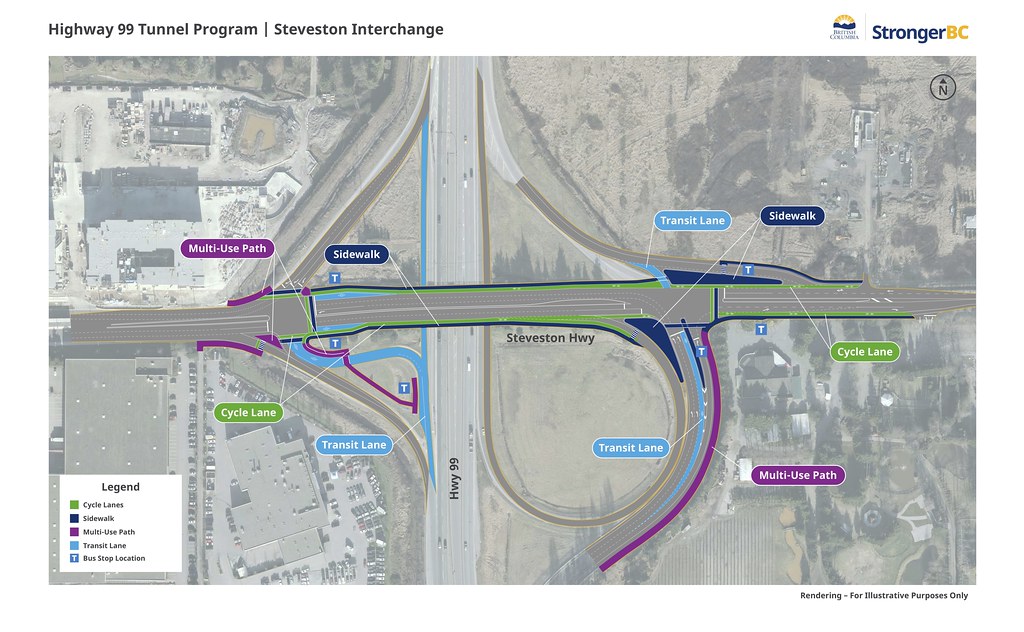 Ground was officially broken on the new five-lane Steveston interchange in Richmond, B.C. as part of the project that will see the George Massey Tunnel replaced with a new toll-free crossing.

“It’s an important day as we move forward on addressing one of the worst bottlenecks in Richmond,” said Rob Fleming, Minister of Transportation and Infrastructure. “I look forward to work getting underway that will improve connections for transit users, drivers and cyclists, and tie in to the new eight-lane toll-free tunnel that will replace the George Massey Tunnel.”

Work is ramping up on the Steveston interchange site this summer, with clearing and utility relocations getting underway in the coming weeks. Major construction will begin this year, with the new interchange expected to be in operation in 2025.

“While Highway 99 is a major regional connector, it’s also a local connector, and we know that this project will make life easier for people in the Steveston community,” said Kelly Greene, MLA for Richmond-Steveston. “Part of our work to make life better for British Columbians involves improving connections that will get people where they want to go within their communities and beyond.”

The Steveston interchange will help move people and goods faster and safer by replacing the existing two-lane overpass at Steveston Highway and Highway 99 with a five-lane structure that accommodates two eastbound lanes and three westbound lanes, including a left-turn lane.

The new interchange will improve access to transit stops and provide safe pedestrian and cycling connections across Highway 99, with sidewalks and separated bike lanes on both sides of the overpass.

“The Steveston Highway interchange project is an important infrastructure upgrade and a critical component of the overall Highway 99 improvements, which will ultimately improve the lives of those in Richmond and commuters through the corridor,” said Malcolm Brodie, mayor of Richmond. “The Steveston overpass and interchange design, including three extra lanes along with dedicated pedestrian and cycling paths on both sides of the twinning overpass, will improve safety and increase efficiency in moving business and commuter traffic, while reducing congestion and vehicle emissions.”

The new Steveston interchange is an important component of the Highway 99 Tunnel Program. It will improve connections to and from Highway 99 as well as reduce congestion for east-west traffic.

Once the new tunnel is in place, travel time and reliability will be improved for traffic headed from Steveston Highway into the tunnel, further reducing congestion at the Steveston interchange and on the Highway 99 corridor.

For more information about the Highway 99 tunnel project, visit: www.highway99tunnel.ca

To see a rendering of the new Steveston interchange, visit: http://news.gov.bc.ca/files/Steveston_interchange_rendering.pdf