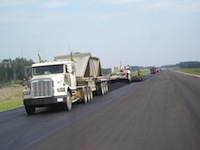 October 2, 2014, Edmonton, Alta. – The Alberta Government
forges ahead to complete the twinning of 240 kilometers of Highway 63 from
Highway 55 near Grassland to Fort McMurray by 2016.

October 2, 2014, Edmonton, Alta. – The Alberta Government
forges ahead to complete the twinning of 240 kilometers of Highway 63 from
Highway 55 near Grassland to Fort McMurray by 2016.

Premier Jim Prentice announced today that work on the final
12-kilometre stretch of Highway 63 just north of Highway 55 has begun, helping
to improve safety for all motorists along this key north-south corridor to the
oil sands.

“With the continued growth in Alberta’s energy sector and
regional population, we know travel on Highway 63 will continue to increase,”
says Jim Prentice, Premier of Alberta. “Today’s announcement demonstrates our
commitment to ensure that travel for residents and visitors to Wood Buffalo is
made safer. Completion of this project also supports Alberta’s energy sector as
our province’s and country’s economic engine. This final contract keeps us on
track to meet our promise to all Albertans to complete the Highway 63 twinning
by 2016.”

Nearly $425 million of Budget 2014 is dedicated to Highway
63 twinning construction.

The contracts, which were awarded through a competitive
tender process, represent a major investment in this key transportation
corridor.