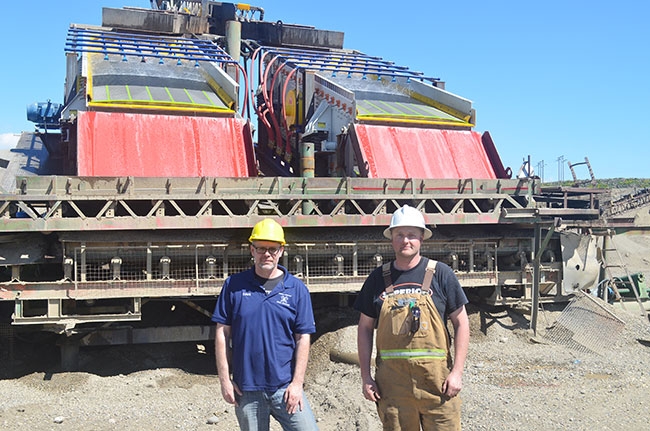 September 25, 2017 – Many of the roads throughout British Columbia this past year have been abuzz with road construction projects. The heart of the Peace Region in British Columbia is no exception, and when many of the local road builders and residential contractors are in need of asphalt and other aggregates, they turn to Nels Ostero Sand & Gravel in Taylor, B.C. The majority of aggregate produced by the company goes to supplying the areas from Fort St. John to Dawson Creek and the surrounding areas.

To learn more about the company’s operation, Rock to Road travelled north from Prince George, up the Alaska Highway, and across the Peace River Bridge into
Taylor, B.C. and met up with Nilson Ostero. Nilson is the third generation from the Ostero family to operate the aggregate business, which was incorporated by his grandfather, Nels, and father, Tom, in the 1960s. The company employs 20 people during its peak operation, which typically starts up at the beginning of April and runs until the end of October.

“We supply asphalt aggregate for local road builders,” Nilson says, adding that his company is also a major supplier of aggregates for the region’s oil and gas producers as well as for residential and drainage jobs.

The company is also a leading supplier of concrete aggregate and is equipped with a fleet of tandem and tridem trucks and tridem and quad trailers to deliver aggregates to jobsites across the region.

The average annual production for the company hovers around 1 million metric tonnes processed with 250,000 to 300,000 tonnes of concrete aggregates sold.

Out with the old
Four years ago, the company was looking for new ways to optimize its operations and did a thorough analysis of its equipment to indicate any points of weakness. At the end of the analysis, the company decided it was time to look at replacing its aging washing system.

“The age of the equipment was getting a little long in the tooth,” Nilson says, while pointing out some other aging equipment on site, including some old 66” sand screws originally built in 1952. “It was definitely due.”

Nilson believed the machine would be a good fit in his operation so he went ahead with the purchase.

The wash plant has been in operation since May 2017 and is looking like a sound investment.

“We always had enough water and the footprint was there,” Nilson says, adding that the investment has increased production while improving his operation’s reliability and the quality of its products. “Throughout the whole plant we’ve now increased production by 20 per cent.”

Additional upgrades
The addition of the Haver & Boecker wash plant isn’t the only recent investment Nilson has made in his operation.

“Throughout the entire site we’ve upgraded the electrical and the crushing,” he says.

In 2014, the company upgraded its crushing fleet by adding a new FLSmidth Raptor 400 cone crusher supplied by Machinery Supply out of Calgary; and a used Clemro 24/42 jaw crusher.

They also hired Aggregate Electrical Services in 2016 out of Acheson, Alta., to upgrade all of the electrical throughout the site.

With the wash plant installed and running smoothly, Nilson says that his company is done with upgrading its operations for the time being, but that he’s always looking for new ways to keep improving his operation. For now, he’s going to stay focused on producing.

“When the sun is shining you’ve got to make as much as you can,” he says.