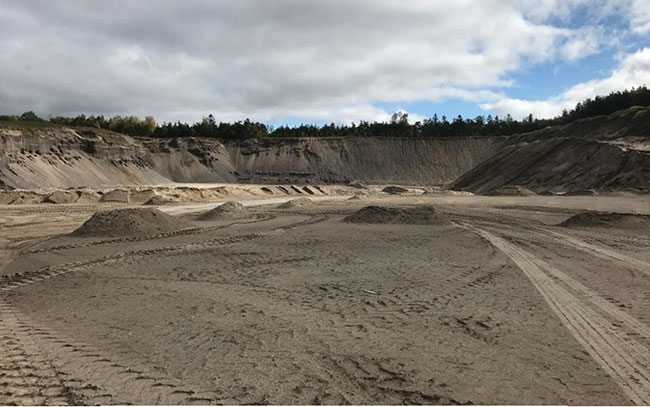 A large scale, Class A pit comprised mostly of sand. Photos courtesy of Government of Ontario.

After more than a year of discussions, submissions, meetings and online surveys, Ontario is preparing to move forward with proposed changes to regulations that govern extraction of aggregates in the province.

The Ministry of Natural Resources and Forestry (MNRF) has received input from industry, municipalities, the public, non-governmental organizations and Indigenous communities about changes to the Aggregate Resources Act (ARA) and is getting ready to update the regulations in the legislation.

It’s been a long and complicated process. The province is pushing to modernize the way aggregate resources are managed and promote growth within the industry while protecting the environment. The aggregate industry in Ontario is already highly regulated, though, so the MNRF is treading a fine line.

The ministry must find just the right balance between reducing the regulatory burden facing the industry while also maintaining strong controls to ensure the water, air and natural environment are protected.

The Canadian Environmental Law Association (CELA), for one, has raised some questions about the reforms and argues that its assessment of the proposed changes reveals that the initiatives are unlikely to maintain strong environmental protection or result in appropriate management of community impacts. Moreover, CELA maintains that key ARA proposals should be withdrawn or re-written.

Conservation Ontario, which represents conservation authorities in the province, is generally supportive of the reforms such as a more robust application process for operators that want to expand to extract aggregate within the water table; but recommends that extraction below the water table be discouraged.

The Ontario Stone, Sand & Gravel Association (OSSGA), which represents more than 280 sand, gravel and crushed stone producers and suppliers, has also weighed in and maintains that the MNRF has, for the most part, struck a balance.

“We like the general direction of the proposed changes because there is a definite attempt on the part of MNRF to streamline, improve workflow and improve the efficiency of the application and approval process,” says OSSGA executive director Norm Cheesman. “These regulations were needed in order to enact some of the legislative changes that have been introduced to the Aggregate Resources Act in recent years.”

For example, he says, the regulations include details on the new process for producers to go from an above-water to below-water licence which was passed in Bill 132, the Better for People, Smarter for Business Act, 2019, and also better harmonizes the ARA with the new provincial policy statement and plans.

“The new regulations also attempt to streamline some processes,” Cheesman says. “Specifically, the industry has long been concerned with duplication between agencies when reviewing technical reports during the application process. The government is proposing in these regulations to restrict agencies from reviewing aspects beyond their mandate. We believe this will help make the process more efficient, while ensuring the rigour of the process remains by continuing to have the appropriate experts review relevant reports. Overall, we believe the government has done a good job of balancing stakeholder interests.”

The OSSGA does have some areas of concern, though, one being in the area of how the MNRF will promote recycling.

The messaging should be consistent with the provincial policy statement, which states that “mineral aggregate resource conservation shall be undertaken, including through the use of accessory aggregate recycling facilities within operations, wherever feasible,” he says. “We believe that the proposed regulations establish unnecessary restrictions and do not allow recycling to occur wherever feasible.”

According to Cheesman, pits and quarries are ideal locations for recycling because haul roads are already in place, sites are usually well-screened, and material and equipment is on-site that may be necessary for creating new products or enabling resale of recycled material.

“The alternative to allowing ongoing recycling on established sites is to increase the volume of either primary or recycled aggregate material brought in from other sites. This material will likely come from operations located farther away, increasing the number of trucks and haul distances thereby increasing social, environmental and financial costs,” he says.

A blast being conducted at a limestone quarry. 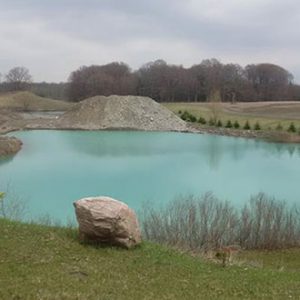 An aggregate pit where excavation has extended into the water table and one side of the pond has been rehabilitated.

In Ontario, the excavation of aggregates is primarily regulated under the ARA. The Act applies to Crown-owned aggregate and topsoil and privately-owned aggregate located on private land within geographic areas identified in the regulation. It sets out requirements for licence and permit approvals, inspection, enforcement and penalties, rehabilitation, and includes the rules on regulation-making authority. There are approximately 6,000 pits and quarries in Ontario that are authorized under the ARA.

With approximately 160 million tonnes of aggregate needed in Ontario each year, the government feels it is important to manage and minimize the impact extraction operations may have on the environment and surrounding communities. Stakeholders were given an
opportunity to comment on the changes for a 93-day period that ended May 15.

Over the last year, the MNRF heard a number of key themes on revamping the rules, such as:

Cheesman says he was pleased that, under the proposed changes, producers will be allowed to apply to the MNRF for an amendment to expand their pit or quarry into an unopened road allowance adjacent to a pit or quarry so aggregate underneath can be removed.

While it doesn’t sound like a big deal, he says it will mean producers would be able to extract thousands of tonnes of aggregate in areas that have already been disturbed and that otherwise would have been wasted.

“This is truly a win-win-win for producers, the municipalities and environmental groups,” he says.

On the other hand, Cheesman was concerned that the MNRF is proposing some requirements to regulate dust and noise, as that is under the bailiwick of the Ministry of the Environment, Conservation and Parks (MECP). The MNRF is proposing that all aggregate permit holders be required to mitigate dust to prevent it from leaving a site.

“Intrusions into other ministry areas of regulation add to red tape, instead of reducing it,” he says, which feels a bit contradictory as the government is trying to restrict agencies from reviewing outside of their mandates.

“MECP is the appropriate dust enforcement agency. We believe that one enforcement authority per issue is sufficient. The industry is committed to meeting and exceeding the standards set for permits and monitoring. Adding more layers of bureaucracy does not further protect the public. Ensuring rigorous standards and enforcement, by the appropriate ministry, does.”

Cheesman says the OSSGA was also concerned that the proposed changes didn’t specifically address the issue of Indigenous engagement.

“We would have liked to see MNRF provide more clarity on Indigenous engagement and the duty to consult. The lack of guidelines as to what the government defines (as) adequate consultation continues to be problematic and without that clarity we add delay and cost to applications,” he says.