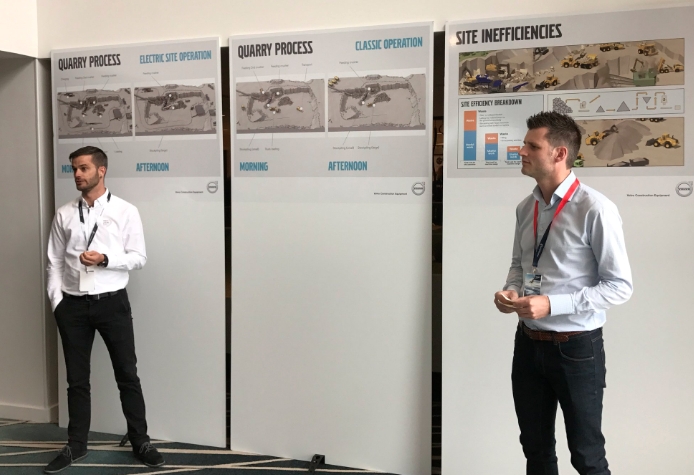 Volvo Construction Equipment and Swedish-based project development and construction group Skanska Sweden are getting closer to making a green quarry a reality.

Both Volvo CE and Skanska Sweden offered an update on their SEK 203-million (or just over $30 million) electric site research project to members of the trade press from around the world as part of the Volvo Ocean Race event festivities held in Newport, R.I. this past May. The two companies confirmed that the project is still on pace to begin its 10-week field test this September at one of Skanska Sweden’s quarries in Western Sweden.

The electric site test project’s roots stem from Volvo CE and Skanska performing a pre-study in three different sites to understand all the stages within the complete quarry process. Based on these results, the company ended up partnering with its customer Skanska Sweden, the Swedish Energy Agency and two Swedish universities to create an electric site research project designed to electrify certain transport stages in quarry operations from excavation to primary crushing and transport to secondary crushing. Work on the project got underway in October 2015 and will demonstrate at one of Skanska Sweden’s 100 quarries.

“We looked at this industry and realized we’ve been working the same way for 50 to 100 years,” says Andreas Sunesson, project manager for Skanska Sweden. “We tried to see what would be the next big thing. What are the inefficiencies in this process?”

The inefficiencies found in the quarry operations included, but are not limited to, machine fuel consumption, inefficient machine usage (idling times, poor bucket filling, etc.), and in the total cost of site operation and processes.

“With the fully autonomous haulers that are designed to line up behind each other with an overlap on the bucket, it enable to have a direct loading from the crusher deleting the loading step for the wheel loader,” explains Uwe Müller, Volvo CE’s chief project manager for the electric site project.

Volvo CE has been busy developing and testing the technologies, concept and prototypes in-house for the site project, which include its prototype HX1 autonomous, battery electric, load carrier; the prototype the LX1 hybrid wheel loader; and the 70-tonne, dual-powered, cable-connected EX1 excavator, which has been in development since the start of the electric site research project in October 2015.

The EX1 excavator will remain in a stationary position for most of its use, feeding blasted rock into a mobile crusher before it’s transported to the secondary crusher and then processed. The two machines will work together, moving a few meters once or twice a day as the excavator works its way through the blasted rock, Müller explains.

“This has allowed us to make it a zero-emission excavator when it’s plugged into the grid,” he says. “However, we’ve designed it with flexibility in mind, so it’s been built as a dual-powered machine. Therefore, we have the option of using the diesel engine when it’s needed, for example, to reposition the machine or quickly move it prior to blasting.”

During the 10-week field test, the quarry will be operating at full production of 750 tph.

Both Skanska Sweden and Volvo CE plan on reviewing the results from the test to see if the electric site concept is commercially viable for the industry, not just in Sweden, but in North America as well. Volvo CE stated that this project is strictly a research project with no plans for industrialization for the time being. The research site project is expected to be complete in late 2018.

If the research project goes as planned, and is found commercially viable, it could offer a concrete example of how quarries throughout North America can find solutions to run greener, more efficient operations. This could not only play a vital role in the economic viability of existing pits and quarries, but also play a key role in the acquisition of new licenses for pits and quarries; as municipalities, provinces and federal governments continue to tighten up environmental restrictions and regulations. Only time will tell.