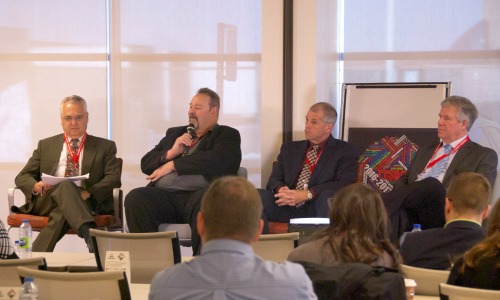 Feb. 16, 2017 – Professionalization of the truck driving industry was a hot topic at the Truck Training Schools Association of Ontario annual conference that took place today in Mississauga, Ont.

Truck trainers in Ontario are preparing for the introduction of mandatory entry level training (MELT) for commercial Class A drivers, scheduled to take effect July 1. The province announced the intention to introduce MELT in June 2014.

Heidi Francis, Assistant Deputy Minister for the Road User Safety Division of the Ministry of Transportation Ontario, opened the conference with a welcome from the provincial government and a quick update on the status of the MELT process.

After extensive consultation with industry, MTO has revamped the knowledge and road tests for commercial Class A drivers in Ontario. The mandatory course will include 103.5 hours of training with a mixture of in class and behind the wheel.

MELT will not only help keep Ontario roads safe, but may help with the shortage of truck drivers in the industry, Francis told the audience. “It’s going mean people are entering a profession,” she said. “It’s something you’re proud of . . . and you will have continuous improvement.”

Industry stakeholders spoke candidly as part of a panel on how mandatory entry level training will affect trucking in Ontario.

“We’re still considered a job of last resort and we need to change that. Part of the reason is that there is no standard,” said Mike Millian, president of Private Motor Truck Council of Canada. The creation of a standard through MELT is a step towards professionalization of the industry, which is a move towards becoming recognized as a trade, he said.

From an insurance perspective, David Goruk with Northbridge Insurance said he expects MELT will weed out the people who think the trucking industry will hire anyone. “Common sense would dictate that the less training and the less experience the more likely they are to be involved in a collision.”

Rolf VanderZwaag with the Ontario Trucking Association emphasized that there is plenty of truck driver training happening in the province, but it’s informal training and it’s undocumented.

“A competent truck driver is an encyclopaedia – there is so much that they know. But there is no document that recognizes that,” VanderZwaag said. The government, he said, will recognize trucking as a trade only after industry does. Part of that recognition is proving there are skills truck drivers must posses. This could be as simple as creating job ads that detail the specific skills required for the position.

Garth Pitzel, the director of safety and driver development for Bison Transport, said that within his company, tenure, more than age or experience, is the biggest factor that affects accidents.

Bison Transport has created a robust finishing program that requires their new hires to be trained to the company standards. That program saves the company money in the long run.

The conference continued with a panel that addressed stigmas in the public about truck driving and shared ideas to change the perceptions. Jacquie Latham with the Ontario School Counsellors Association explained how companies can help shape the industry image by connecting with high school student counsellors.

Alyson Truax with Employment Ontario stressed the importance of truck companies taking on the role of educators when they hire. The industry needs to have the resources to teach their new hires and to keep their interest.

Kelly Henderson, executive director of Trucking Human Resource Sector Council Atlantic, presented on challenges and strategies to advance women in trucking. The experience of women in the industry varies, Henderson said, but there is a need for company leaders to trickle down a culture of equity.

Henderson challenged the audience to foster an environment that encourage women to sign up, and gives them room to advance them in their careers.

The conference continued with a session on healthy practices for truck drivers, and on medical marijuana. Jeremy Thiel from DriverCheck encouraged companies to put in place proper drug and alcohol programs for employees.

In a driver panel, recent graduates of TTSAO explored ideas about the appeal of trucking industry and what might help attract new students to address the driver shortage.

The day wrapped up with a candid conversation between Mike McCarron with Left Lane Associates and Stan Campbell, the host of Trucker Radio. McCarron shared a few experiences after more than 33 years in the industry.