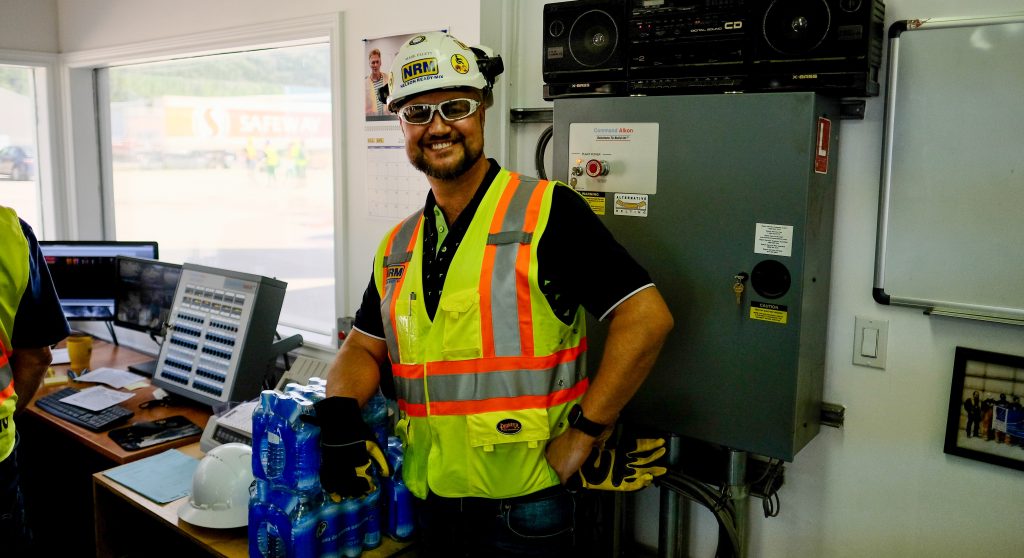 It’s not often someone can land a spot on Rock to Road’s Top 10 Under 40 while boasting 22 years of industry experience. But Mark Ellett, HSE manager (health, safety and environmental) for Terus Construction can do just that.

Mark is a third-generation road builder and has been with the Colas Group since he was 16 years old when he started out as a general labourer. He has obtained an impressive of list of diverse work experience in the industry including operations, estimating, project management, and occupational health and safety in the road construction, ready-mix and aggregates industries.

“I actually started working with my grandfather on our paving crew,” Mark recalls. “My father was division manager at the time in Fort McMurray, Alberta in 1998. We were working for a company by the name of Everall Construction, which was purchased by the Colas Group. That’s how I came to join this organization.”

Mark began working year-round in 2004 with his winters spent in the safety department and summers on a paving crew. In the summer of 2009, he began working as a project coordinator in Fort McMurray, Alta. He then started a position as project manager for the Yellowknife division in 2010 and 2011. In 2012, he was given another opportunity to move to the Yukon as a project manager in Whitehorse. During this time, Mark looked after remote projects in Inuvik, Dawson City, Watson Lake, Atlin, and Fort St. John. In 2015, he became the regional safety supervisor for Southern B.C.

“He administered the safety program of around 250 workers all over southern B.C. and saw great success in this role,” says Tyson Craiggs, aggregates manager at Terus Construction and past-president of the B.C. Stone, Sand & Gravel Association.

“Mark moved into operations for the next few years as a regional concrete supervisor for the West Kootenays. He has managed all aspects of three ready mix concrete plants in Nelson, Castlegar and Trail. In early 2020, Mark started a new role as occupational health and safety supervisor at Terus Construction’s head office in Surrey.”

That role came with a very unexpected and challenging situation in the form of the COVID-19 coronavirus, which took its grip on the world shortly after Mark moved to Surrey.

“The pandemic has been a huge challenge for people’s mental health and we have had to work to keep them focused on their safety,” Mark says. “While learning in this position, adapting to the pandemic has been really eye-opening for our organization. It’s something that has changed me as a safety professional.

Another challenge Mark has faced many times in his career is moving from one town to another as new opportunities with the company became available.

“It’s starting over every time you go to face a new area. Building relationships in small communities can be challenging because sometimes they’re kind of closed off, and then you build those relationships and then leave. That said, having all those previous relationships have been a huge benefit to me,” he says.

One of Mark’s most recent projects was leading the implementation of various software programs in the organization, as well as spearheading the launch of a new safety management system in 2021, known as Cority.

“In June of 2021, Mark became the health, safety and environmental manager for Terus Construction, looking after the HSE program for British Columbia and the Yukon. He is the youngest person to fill this role,” Tyson says.

“Mark has a passion for the construction industry and takes pride in keeping people safe. He plans on furthering his education in the future and is interested in innovative solutions to today’s problems and those to come.”

Although he has 22 years of experience under his belt, Mark feels like he’s still early into his career and his ready to continue embracing new challenges and opportunities.

“My ambition is to achieve is a zero-incident program at Terus through our “Goal Zero” safety culture program. It is something we have been working towards for five years. It’s a program built from the ground up with all workers involved. There’s worker feedback ranging from people that are first day on the job labourers to the most senior officers and management. It’s an organic way for how people can view safety,” he says.

“I get a lot of satisfaction from my job. The construction industry and the people here have always been my passion, and I take pride in keeping them safe. When I can connect training, coaching and mentoring, that’s where I get the most personal job
satisfaction.”