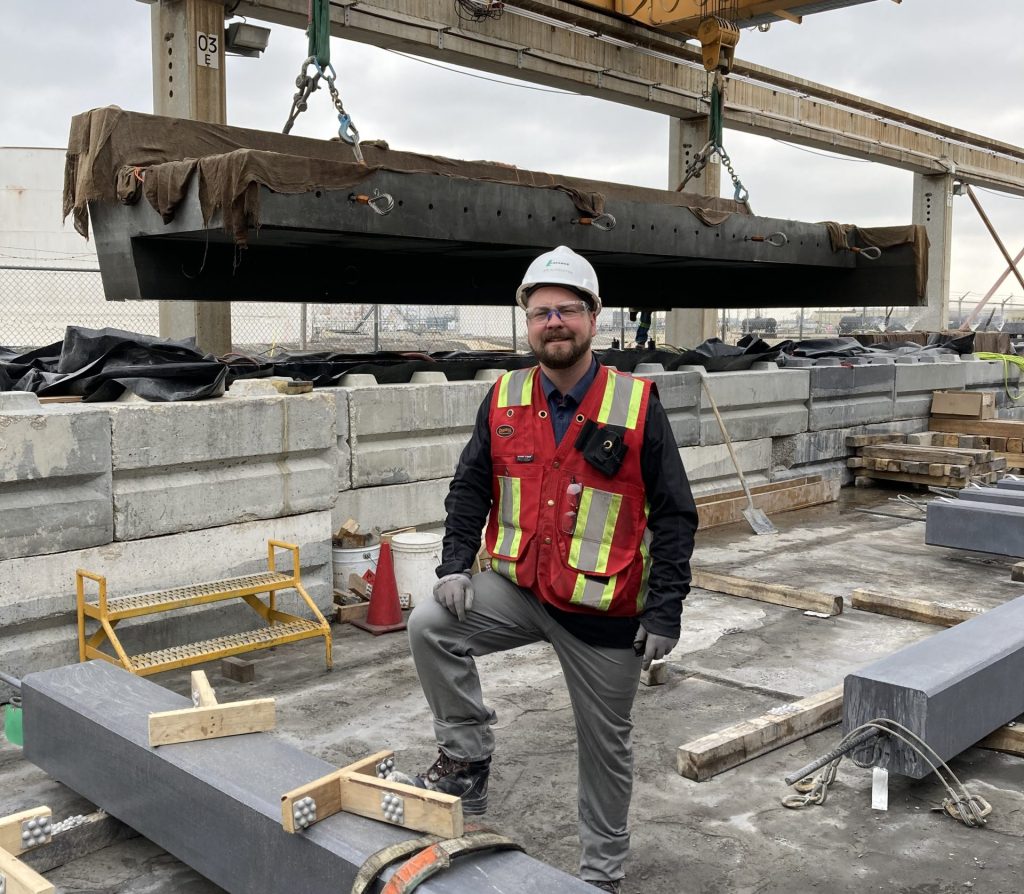 Joe Klippenstein, general manager of concrete products at Lafarge Canada in Winnipeg, Manitoba,  has been named as a recipient of Rock to Road’s Top 10 Under 40.

About 17 years ago, Joe Klippenstein was getting ready to enrol at Red River College Polytechnic as a computer programmer. To make some money the summer before school started, he took a job working with his father as a labourer on the precast floor, and instantly fell in love.

“I loved the people and how the work was changing. Every day was new stuff – new aggregate, new people coming in. I fell in love with it,” Joe recalls.

As time went by, Joe moved up within the company holding various roles. He ended up staying there for the first 12 years of his career, before joining up with a startup company specializing in greenfield construction.

“We grew from to $2 million in one year to more than to $20 million the next year,” Joe recalls.

While working at the start-up, he was approached by Lafarge Canada to come and join the team. Joe has been the general manager for concrete products in Winnipeg for a little over two years. Since taking on the role of general manager at Lafarge Canada, Joe has started up a couple initiatives that he’s very proud of.

“Our Idea of the Month program is designed to engage, motivate and reward people for pushing the envelope of the  status quo and coming up with new ideas to improve our business. In one year, the employees have come up with almost $1 million dollars in potential savings,” he said.

“Each winner receives a gift card, and their idea is posted in all three plants. The goal is to challenge the team to think differently and then for us as a leadership team to listen and implement the ideas. Some have worked out great, others not so much. But in the end, we will all be winners because it’s the thinking, listening and trying new things that will help our team improve,” he says.

“I’ve also implemented a strong housekeeping program with assigned owners to designated areas, monthly audits and posted results. This program won us ‘The Most Improved’ for Western Canada.”

Sustainability is an important aspect of the work that Joe is involved in.

“I believe sustainability will be key to our future construction needs and precast concrete offers that. We are currently working on new structural panels that will offer a better building envelope in both the residential and commercial markets,” he says.

“Modular building will help us standardize our process, including more of the building that can be pre-fabricated and help reduce our carbon emissions. I can’t say too much, as we are still in the R&D stages, but I’m looking forward to what the future brings.”

Joe looks back on all of his past projects over his career to date with great pride.

“In my 17-year precast career, I have been a part of many great and diverse teams that have produced and installed hundreds of bridge structures, including bridge project 7116 on the TransCanada Highway near Portage La Prairie and bridge project 6989 on PTH16 over the Assiniboine River,” he says.

“When it comes to other concrete components and projects, I have been lucky enough to work on so many it would be hard to list them all. A couple of the most recent would be Stradbrook Apartments and 380 Osborne, which are two total precast multi-family residential structures completed in 2020. “

Joe’s favourite aspects of his career are the teams he works with, and the constant innovation in the industry.

“R&D is always finding new and better ways to build. Just because we did it one way yesterday, doesn’t mean we need to do it that way tomorrow,” he says.

Joe’s advice to the younger generation is consider a career in the construction industry as an option.

“It’s amazing. Try it and see if you like it a lot. Make sure to find a mentor, it’s important. I have a few people I mentor, and I still have someone that mentors me. I still call my old boss and ask for advice. That really helped me through my younger years,” he says.