May 23, 2018
By Volvo Construction Equipment

May 23, 2018By Volvo Construction Equipment 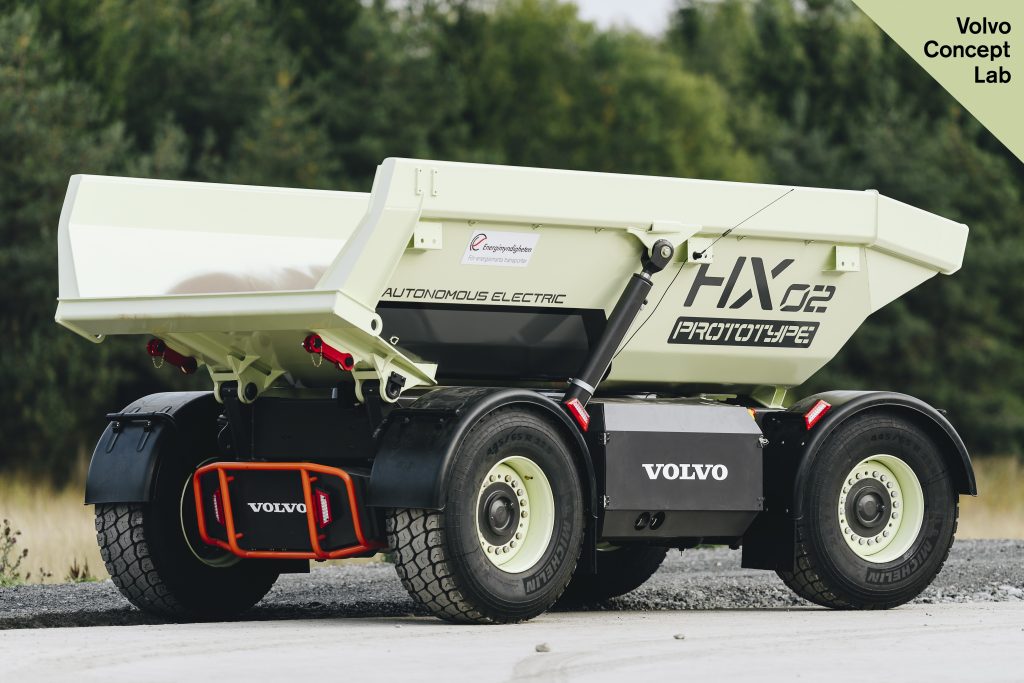 Volvo Construction Equipment is busy building a fleet of eight HX2 autonomous, battery-electric load carriers for its electric site solution. The research project – which aims to transform the quarry and aggregates industry by reducing carbon emissions by up to 95% and total cost of ownership by up to 25% – will be tested for 10 weeks in six months’ time. Photos: Volvo CE

May 23, 2018 – Volvo Construction Equipment (Volvo CE) is gearing up to test its electric site solution before the end of the year. The company is currently building a fleet of eight prototype HX2 autonomous, battery-electric load carriers. As well as a fleet of HX2s, other prototype machines that make up the electric site system include the LX1 hybrid wheel loader and the EX1 cable-connected excavator. Skanska Sweden will incorporate the demonstration machines into its operations and test the electric site concept at a quarry in western Sweden for 10 weeks at the end of 2018.

The electric site research project is predicted to reduce carbon emissions by up to 95% and reduce total cost of ownership by up to 25%. The project aims to electrify transport stages in a quarry – from excavation to primary crushing and transport to secondary crushing. It involves developing new machines, work methods and site management systems, which together, form a complete site solution. New technology encompasses machine and fleet control systems and logistic solutions for electric machines in quarries.

Electrifying innovation
The HX2 is a second-generation concept machine. It is fundamentally different to the HX1. “The HX1 was proof of concept,” says Uwe Müller, Volvo CE’s Chief Project Manager for the electric site project. “Once we knew it was feasible, we updated the design requirements for the HX2 to incorporate shared technologies and components from the Volvo Group, such as electric motors, batteries and power electronics. Integrating a completely new drivetrain was crucial to take full advantage of the groundbreaking electromobility developments that are happening inside the Volvo Group. Another new feature is the addition of a vision system, which allows the machine to detect humans and obstacles in its vicinity. We are currently building up a fleet of HX2s ready for the demonstration later this year.”

Hybrid technology in focus
The LX1 is Volvo CE’s prototype electric hybrid wheel loader. The machine can deliver up to a 50% improvement in fuel efficiency, as well as significant reductions in emissions and noise pollution compared to its conventional counterparts. The LX1 is a ‘series hybrid’ that incorporates a driveline that consists of electric drive motors mounted at the wheels, electric-driven hydraulics, an energy storage system, a significantly smaller diesel engine and new machine architecture, including a new design of the lifting unit. It’s this combination that enables the substantial gain in fuel efficiency. The prototype – which has 98% new parts and a fundamentally new machine design – can do the work of a wheel loader that’s one size larger.

Staying connected
The 70t dual-powered, cable-connected EX1 prototype has been in development since the electric site research project started in October 2015. “Most of the time, this machine will be stationary,” says Müller. “Its job will be to load blasted rock into the mobile crusher before it’s transported to the secondary crusher and then processed. The EX1 and the mobile crusher will work together, only moving a few meters once or twice a day as the excavator works its way through the blasted rock. Because the machine will be relatively static, it’s ideally suited as a fully electric machine on a cable. This has allowed us to make it a zero-emission excavator when it’s plugged into the grid. However, we’ve designed it with flexibility in mind, so it’s been built as a dual-powered machine. Therefore, we have the option of using the diesel engine when it’s needed, for example, to reposition the machine or quickly move it prior to blasting.”

The base machine for the EX1 is a Volvo EC750 that has been upgraded to incorporate an electric motor in addition to the diesel engine. “To fit the new components in the machine without increasing its size required a significant amount of repackaging work,” continues Müller. “However, in terms of the operator interface and controls, nothing has changed – it’s operated in exactly the same way as a conventional Volvo excavator. If the cable is connected, the machine will automatically start in electric mode. If it’s not, it will start in diesel mode.”

Driving sustainability and change
Volvo CE has teamed up with its customer Skanska Sweden, the Swedish Energy Agency and two Swedish universities to collaborate on the SEK 203 million electric site project. Volvo CE is coordinating the project and is in charge of developing the machines and systems. Skanska Sweden is providing logistical solutions, application relevance and job site knowledge. The Swedish Energy Agency – a government agency for national energy policy issues – is helping to fund the project, and Linköping University and Mälardalen University are carrying out research. Two PhD students are looking at battery aging and energy management for electric vehicles, as well as functional safety. At this stage, the machines and technology involved in the electric site solution are part of a research project and are not commercially available.

“The electric site research project is a step towards transforming the quarry and aggregates industry,” concludes Müller. “By using electricity instead of diesel to power construction equipment in a quarry, we have the potential to deliver significant reductions in fuel consumption, CO2 emissions, environmental impact and cost-per-ton. We are combining intelligent machines, automation and electromobility as a door opener to developing completely new solutions to meet customer needs. The electrification of construction equipment will produce cleaner, quieter and more efficient machines – this represents the future of our industry.”

Volvo Construction Equipment is busy building a fleet of eight HX2 autonomous, battery-electric load carriers for its electric site solution. The research project – which aims to transform the quarry and aggregates industry by reducing carbon emissions by up to 95% and total cost of ownership by up to 25% – will be tested for 10 weeks in six months’ time.