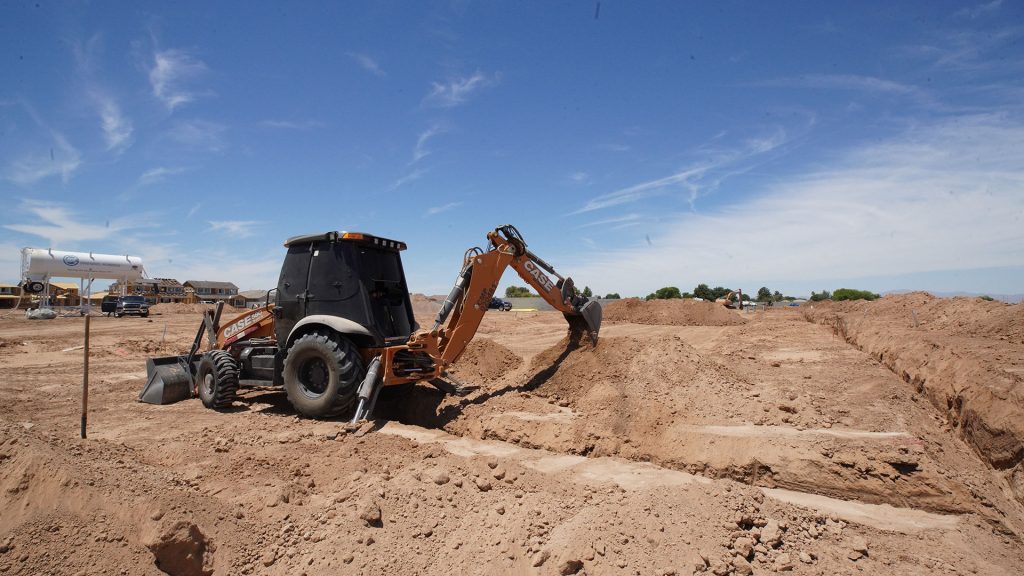 Kevin Smith details his use of the CASE 580 SN backhoe loader and the advantages it provides him as an owner operator working in residential and commercial excavation in the Phoenix area.

Kevin Smith has spent his entire life around backhoes. His father started a small excavating company in 1984 with a single CASE 580D, and Smith spent most of his childhood in and around equipment.

“My dad started a construction company named Casey’s backhoe service — started with one 580D at the time,” says Smith.

“[He was] doing pretty much the same thing I do; digging residential services, undergrounds for power and gas, and a lot of commercial and residential work. He took us with him all the time, and it was just natural to be on a machine and around it.”

By the time Casey’s Backhoe Services was sold in 2001, they had a fleet of 25 CASE backhoes. “I was too young, and I wasn’t smart enough to take it over, but he sold it back in 2001,” he recalls. “And the company is still in operation today. Still with all CASE equipment.” 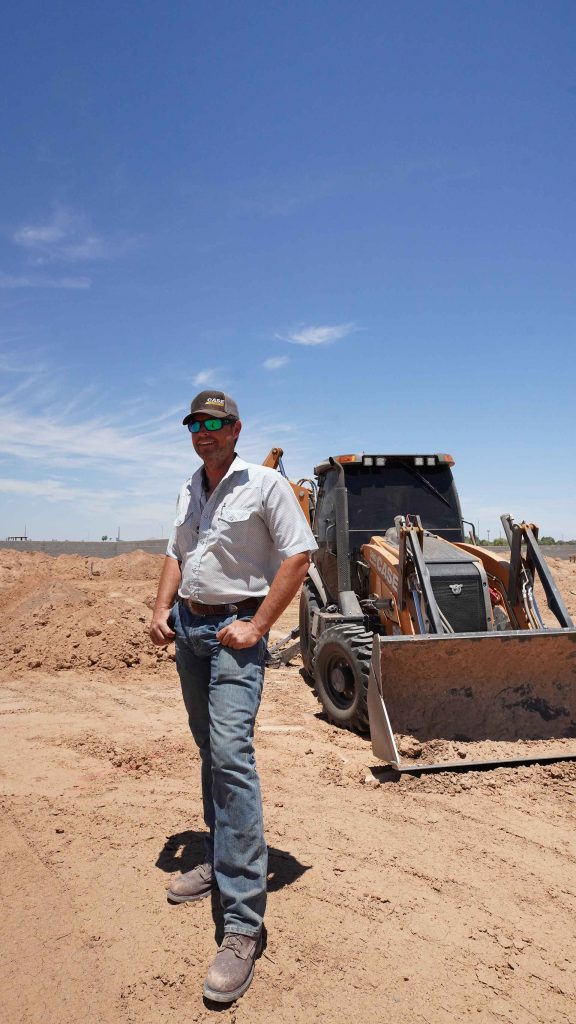 Kevin Smith in front of his Case backhoe.

Since then, Smith has spent time working for a local equipment dealer and helped manage their operations in Phoenix. Smith got the itch, however, and knew it was time to go back out on his own. He launched TK Backhoe Services in early 2021 and, in a short period of time, has leveraged his lifetime of experience and contacts in the Phoenix area to pick up where he and his dad left off years ago.

“One of the biggest reasons for restarting the business and getting back in a backhoe is there is a lot of freedom as an owner operator with only one machine right now, a lot of freedom, a lot of time to think,” he says. “I’m a pretty quiet, reserved guy. So just sitting in the backhoe and digging and keeping to myself, it is kind of what I love. Plus showing my kids some work ethic and trying to drive them into that entrepreneurial mindset. Having that mindset growing up, I think it was important for me at such a young age.”

Just like his father back in 1984, Smith started TK Backhoe Services with a single CASE backhoe—this time, a CASE 580 Super N. “It was a pretty easy decision for me to go with CASE,” he says. “I chose the 580 SN because of the weight,” he explains. “It’s easy to transport, it’s got great breakout force, good reach. It’s probably one of the fastest digging machines for a backhoe that there is out there. It’ll outswing and outdig.”

As a true owner operator who spends most of his day in the machine, as well as running his business, Smith is particular about the setup of his machine.

The must-have backhoe features and considerations for any owner operator

Every experienced backhoe operator has strong opinions on how they like their controls. While CASE offers a pilot control option, Smith prefers the traditional four-lever configuration.

“My backhoe is spec’d out a little bit different than what the average guy buys right now,” he says. “A lot of [contractors] are going with pilot controls. I chose to go with the four-lever foot swing controls. And for me, it’s just what I grew up on. You can feel just about everything. There’s no lag time—it’s just direct to the hydraulics. It gives you that feeling, that touch that an owner operator like me is looking for in a backhoe.”

“Another thing that I really wanted to have was the hydraulic quick disconnect, the hydraulic coupler. We’re switching out buckets a lot on this job where they’re going from 24-inch buckets to a 36-inch bucket, and switching over to a compaction wheel. Having that hydraulic coupler just made it super easy on me and a lot quicker, which in turn helps my customers decrease their costs and time on the job for them. It’s been a huge time saver.”

Smith also outfit his 580 Super N with the speed selectable Auto Ride Control option. This automatically kicks ride control in when the machine hits a desired speed and provides a smooth ride to improve comfort and help reduce material spillage.

“Ride control was important for me out on these job sites. As you can tell, they’re not the smoothest of roads so having ride control has been really nice in keeping a little bit smoother ride.”

“One of the things I look for—and I think other people should consider—is fuel efficiency and economy,” says Smith. “Don’t always just think about the one color or brand. It’s not always the best thing for the business. Be open-minded and when you’re getting a machine, picking on fuel, picking on the after-treatment system, looking at breakout force and reach—what are you really buying a backhoe for?”

“Fuel efficiency is huge — fuel here is little over $3 a gallon. So every gallon I can save a day adds up, whether I’m black or red on the bottom line at the end of the month, I know this machine has been great on fuel.”

CASE backhoes offer an option called Comfort Steer, which reduces the lock-to-lock rotations of the steering wheel required to fully turn the front-end of the backhoe—from 3 turns down to 1.5. This makes operating in tight loading patterns and in tight areas much simpler, and reduces the fatigue of the operator throughout the day.

While the extendahoe option on backhoes has always been a must-have in northern climates, Smith sees it as a powerful tool for him in Arizona as well – especially when it comes to the finish of a trench.

“The biggest advantage out here for having an extendahoe is getting that little bit extra further, that extra reach you need to get, and being able to [more easily] flat bottom a trench,” says Smith.

The owner operator spends long days working and conducting business from the seat of their backhoe. While the air-ride seat wasn’t a priority at first for Smith, he has seen its benefits after long days at the controls.

“A couple of days after I first got this machine, we were working 10-, 12-hour days and I called my dad and I said, you wouldn’t believe how comfortable this seat is,” recalls Smith. “This one has air ride suspension, which is awesome. It has heated seats. Not like I’m going to use it anytime soon, but the seats, the adjustable armrest, you don’t even know you’re sitting down all day. The seat has been awesome, very ergonomic.”

“I wanted a bigger stance on the front end, taller tires — we kind of get in some muddy conditions,” he says. “And I wanted to see the tractive effort on this machine versus all my older machines with smaller front tires. This one’s got way more tractive effort and pushing power.”

“Arizona is kind of unique because we can go from this jobsite where it’s kind of potato dirt, and really nice dirt, but 300 feet that way it’s just really hard dirt clods like it almost wants to turn into caliche, and then down over there, sand, and then we can get into caliche all within the same job,” Smith explains. “So this backhoe, even though she’s one of the quietest backhoes I’ve been around on a CASE — you can’t hardly hear it running. A lot of power, a lot of good breakout force. If you ask it to dig it out, it’s probably going to dig it. We were doing some septic jobs and normally I would call and get a breaker, but we threw some ripper teeth on and it just etched it out. I don’t know how she did it, but she did it.”

CASE offers a feature called PowerBoost on its models with pilot controls that further enhances digging power. PowerBoost provides the operator with a momentary boost of increased hydraulic power without decreasing engine RPM (so as not to affect speed/cycle times). This feature is ideal for lifting and digging through tough conditions.

As for his return to the dirt — Smith feels like it’s the best decision he’s made in years.

“Don’t be scared to come out here and play in the dirt,” he concludes. “You’ve got hundred-thousand-dollar backhoes and half-million-dollar excavators that are top of the line machines, and you don’t get to do that every day in a cubicle. Don’t be scared to get out there because these are very rewarding jobs… and it’s fun to get in a backhoe. It’s fun to get in a little mini excavator or a skid steer and start a business. The work is out there, so don’t be scared.”