Work begins to replace suspended spans on the Macdonald bridge 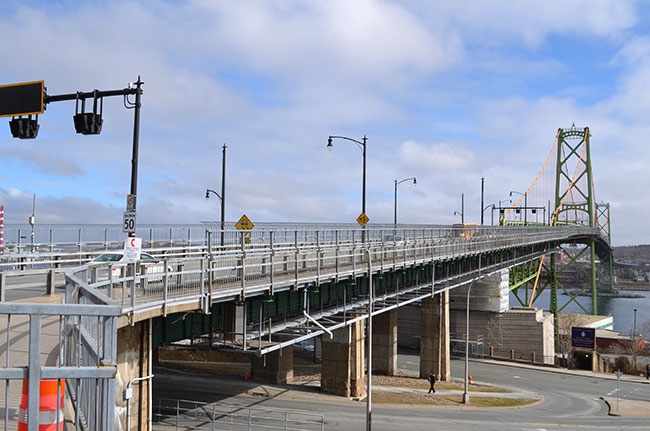 Twenty years ago, officials recognized that it was only a matter of time before substantial work would be needed to repair the Angus L. Macdonald bridge, one of the largest suspended span bridges in Canada and a vital transportation link between Halifax and Dartmouth, N.S.

“When we added the third lane in the mid ’90s, we knew going into that project that the suspended spans would have to be replaced at some point,” explains Jon Eppell, the chief bridge engineer for Halifax Harbour Bridges. “At that time, we thought it would be 20 or more years out.”

It turns out that 20 years couldn’t have been more accurate.

Fast-forward to 2015 and work is underway to replace the spans where, at some points, the pavement is no longer sticking due to the corrosion underneath.

The Angus L. Macdonald Bridge, named after Nova Scotia’s Premier from 1933-1940, opened to traffic on April 2, 1955. The bridge was built to create a direct transportation link to both sides of Halifax Harbour’s Bedford Basin, linking Dartmouth in the north to Halifax in the south, while still providing enough clearance for large freighters to pass along the waters below.

The 762-metre suspended span bridge, which runs 1.3km when including the Halifax and Dartmouth approaches, was originally built for two-lane traffic with a sidewalk and a duct way to meet the traffic demands of the time. Fifteen years later a second bridge was added, the A. Murray MacKay bridge, located just a few kilometres northwest of the Macdonald. Approximately 33 million vehicles cross the two bridges on an annual basis.

In 1999, an expansion project was done to add a third lane to provide for additional vehicle capacity on the bridge. The sidewalk and duct way were removed, the original deck was widened on the suspended spans and replaced on the approach spans for the creation of a third vehicle lane, and then a protected sidewalk and bike lane were added to the outside of the trusses. The $60 million project improved both pedestrian and vehicle capacity for transportation between the two growing communities.

Selecting a contractor
Ten years later, in 2009, preliminary work began on the next phase of bridge re-development. Halifax Harbour Bridges (HHB) – the provincial organization set up to operate and maintain both the Macdonald and MacKay bridges – initiated a scoping study to determine what work would need to be done to the Macdonald bridge. In 2010, a preliminary engineering study began, followed by the start of detailed design work a year later.

In 2013, the commission issued a Request for Qualifications (RFQ). As part of the RFQ process, HHB stated that two-to-three preferred bids would be shortlisted, after which a tender (issued as a proposal call) would be issued. Three of the six bids were selected for the shortlist and, in June of 2014, American Bridge Canada Co. was selected.

Not only was American Bridge Canada a strong bridge construction firm to select, but they also had much needed experience and capability to draw on. In 2000-2001, the company had done decking work on a similar suspension bridge: the Lions Gate Bridge that connects Greater Vancouver with North and West Vancouver at the first narrows of Burrard Inlet at Stanley Park. At that time, it marked the first time that a suspension bridge’s deck had been replaced while keeping the bridge open to vehicular traffic during the day.

Preparing the bridge
Preliminary work on the $150 million Big Lift began in early 2015. On March 1, overnight closures of the bridge began so work could be done to reinforce the existing structure in preparation for replacing deck segments. That will be followed in June by the removal of the walking and bike lanes to help reduce the load.

By the last week of August, it is expected that the preliminary work will be completed and the first deck segment can be replaced.

The first section of the deck replacement will begin at the Dartmouth side of the bridge. Before each 20-metre segment is cut, some lifting is required in order to get the forces in the truss to go, essentially, to zero. That allows the cut to be made without the truss springing apart. The load is then taken from the lifting gantry, which will have been installed during the preliminary work on the bridge, and the 20m segment is lowered to the harbour below where a barge will be waiting for it. On the same barge, the new 20m segment will be raised up and connected to the existing structure temporarily (permanently attached on one side, temporarily to the adjacent deck being replaced next). The segments are being fabricated by Dartmouth-based, Cherubini Metal Works.

The first four of the total 46 deck replacements will take place during weekends and in the daytime. Once those four spans are replaced, the bridge will be closed overnight for 10 ½ hours at a time, from 7:00 p.m. to 5:30 a.m., in order to replace each additional span. By doing the first four spans in the daylight, on the weekend, the system can be put in place in order to ensure that the 10 ½-hour time frame can be met.

Forces Below
That timeline becomes even more important during phase two of the deck replacement, where time is even more of the essence. Phase two of the replacement involves the spans that need to be replaced where there is land below rather than the harbour, on the other side of the Halifax Tower.

But the land is not simply a park, residential dwellings or commercial operations. Below the Halifax portion of the bridge is the home of the Canadian Navy and base of operations for Canada’s Atlantic Fleet. As a result, several adjustments have to be made to the deck replacement process.

“In that location, American Bridge Canada will modify the lifting gantry to put a turntable on it,” Eppell says. “The spans will be cut in 10m segments rather than 20m. The reason that’s done is because we put the segments on a truck and bring them across the bridge, lift them up onto the turntable gantry, rotate them 90 degrees, and then put them in place.”

The 10m deck segments are a tight fit to drive across the bridge, which is 10.8m wide guardrail-to-guardrail.

The spans being replaced are taken off the same way, but the trusses are cut and folded down on to the top of the segment. Without cutting the trusses, the segments would be too high to drive under some of the municipal signage, bridges and light standards.

Once the segments are all fastened in place, the main cables will undergo a dehumidification process, lengthening the life of each cable, and new hangers will be installed. The hangers could be done during the construction process, however since the lifting gantry will be attached to the hangers, it was determined that it would be better to replace them once deck replacement was completed.

The Big Lift
Initially, the bridge will be lower than it was before construction began. The stiffening trusses on the bridge are currently above the deck. However, on the new deck segments, the stiffening trusses will be below the deck. Also, they are shallower than the existing ones, but still take up more space than the existing floor beams below the deck.

As a result, the bridge will have to be jacked up once all of the deck segments are in place in order to provide the same shipping clearance as pre-construction.

The construction schedule calls for the re-opening of the sidewalk and bike lane in December of 2016. The full project is slated for completion in the fall of 2017.

Inside the numbers of the The Big Lift