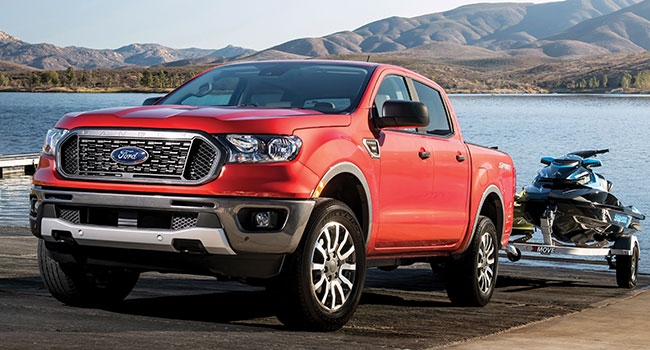 For 28 years the Ford Ranger was a key player in the mid-size pickup truck market. Its size and price were an attractive alternative to the full-size trucks available in the decades from 1983 to 2011 – and, as it got older, its steadily dropping cost kept driving sales.

In 2010, I was attending an industry event in San Diego, California when I saw a newspaper ad advertising a Ford Ranger sale at a local dealer. A new, bare bones Ranger was going for US$9,999.

I remember one of my colleagues remarking, “I could put one on my credit card at that price.”   Maybe he should have.

The next year Ford ended the Ranger run, and for the next seven years, kept telling automotive journalists that the F-150 served “all” the needs of truck buyers – there was longer a need for a midsize pickup. Well, they were almost right.

In the early part of this decade, one by one, each of the American manufacturers dropped production of their mid-size trucks.

The only exceptions were the Japanese Toyota Tacoma and the Nissan Frontier. For a short time, they were the only mid-size pickups on the market and they sold well.

Then, after a short break, GM reconsidered and brought back its mid-size twins – the Colorado and Canyon – and sales took off.

Frankly, I think there was always a demand for mid-size trucks – there was just a lack of product. Now that the new Ranger is back we once again have a decent selection of mid-size trucks and that’s good for Canadian truck buyers. Now, if only Ram would resurrect the Dakota.

The 2019 Ford Ranger was recently driven for the first time in San Diego, not far from where I remember staying a decade ago, and reading that discount Ranger sales advertisement. Mind you, this new Ranger has nothing in common with that earlier model; and neither does its new price.

The Canadian base price on the entry-level model is pegged at $30,969.00 for a XL SuperCab 4×4. It’s also available in an XLT trim (SuperCab or SuperCrew) and the top Lariat SuperCrew 4×4 will cost you $42,289.00. Of note: Only 4X4 models (regardless of trim package) are offered in Canada.

Truck bodies are available in a SuperCab (four doors; clamshell configuration) or as a SuperCrew (four normal doors). In addition, there are two box sizes: a five-foot or a six-foot.

On the outside, the 2019 Ranger evokes a muscular body with a high beltline that emphasizes strength; while a raked grille and windshield are said to give it an athletic appearance. This raked feature also aids in aerodynamics and reduces wind noise. From the rear, the Ranger identifies itself loudly with its name stamped into the tailgate. New headlamps and taillamps are available as LED’s.

Inside, the Ford Ranger blends comfort and functionality with room for up to five people, their gear and accessories.

The centre stack is home to an 8-inch touchscreen for the available SYNC 3 system, while the instrument cluster features dual LCD screens for real-time vehicle, navigation and audio information.

It’s important to note that while Ranger was absent from the North American Ford truck lineup these past eight years there was always an “international Ranger” being sold around the world. However, the model that we saw in San Diego was developed exclusively for the North American truck market, says Ford. It’s being built alongside the F-150 at the Michigan truck plant – and tested in the same way.

This new Ranger is built with a high-strength steel frame, fully boxed with six cross-members, modern parabolic leaf-spring rear suspension, front and rear steel bumpers, short overhangs for off-road clearance and a hitch platform that is through-welded to the frame.

The standard powertrain consists of a 2.3L EcoBoost engine and 10-speed automatic transmission. This new engine is designed with direct fuel injection, a twin-scroll turbocharger and a 16-valve design.

For durability, the engine features a forged-steel crankshaft and connecting rods, and chain-driven dual overhead cams.

It also comes standard with Auto Start-Stop. This engine makes 270 hp and 310-lb.-ft. of torque. This chassis and powertrain combination offers best-in-class (gas) towing of 7,500 lb. Payload is a very respectable 1,860 lb.

Where this new Ranger certainly differs from its extinct former version is in the realm of electronics.

It incorporates smart driver-assist features not even thought of a decade ago.

Infotainment (on that 8-inch touchscreen) is cutting edge with SYNC 3 that features Apple CarPlay and Android Auto.

Ford has always been good at offering a vast variety of optional features and purpose-built packages for its trucks. This Ranger is no exception.

By combining a choice of these packages and various body configurations it’s possible to order over 30 distinct versions of the new Ranger.

These trucks are arriving at dealerships across Canada now.

Howard J Elmer is an automotive editor, writer and author, based in Brampton, Ont. He has a transportation, newspaper, magazine and radio background. His vocation grew out of his fascination with all things motorized including trucks. His licensing and experience includes operating heavy trucks, recreational vehicles, watercraft, off-road vehicles and even military assets.

Elmer is a past director of the Canadian Society of Magazine Editors, member of the Truck Writers of North America, the Automotive Journalists Association of Canada and past president of the Brampton chapter of the Canadian Progress Club.