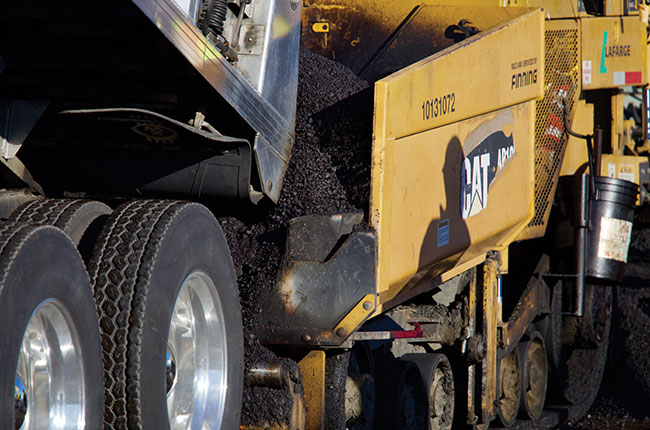 As global warming becomes an increasing concern around the globe, companies, cities and individuals are expected to do more to reduce their carbon footprints and curb GHG emissions. With higher carbon taxes and stricter environmental regulations inevitable across Canada, many companies are trying to stay ahead of the curve and invest in a variety of initiatives and technologies to maximize sustainability in both their operations and their products.

Leading the way in this approach is Lafarge Canada, which has been extremely active in investing the latest technologies in its asphalt plants to increase its overall sustainability.

Lafarge’s Mitchell Island Asphalt Plant, in the Greater Vancouver Area (GVA), has offered a unique opportunity to make this change through increased use of recycled asphalt pavement (RAP). The Mitchell Island plant is one of three asphalt plants the company operates in the Greater Vancouver Area. Lafarge Canada recently invested in a new Astec Double Barrel X Dryer/Drum system, which incorporates an external mixer and VFD drive on the drying chamber. This system provides for better heat transfer and even particle distribution of all particles throughout the mix.

The Astec-patented design allows for recycled asphalt pavement (RAP) to enter directly into the mixing chamber without coming in contact with the hot gas stream of the dryer. The outer mixing chamber mixes RAP with dry hot aggregates maximizing heat and binder transfer between RAP and aggregate in a low oxygen atmosphere before being discharged into the external mixer. Because the RAP is heated by the hot aggregate, not the burner, the Double Barrel X dryer/drum mixer prevents agglomeration and runs clean.

The variable drive allows the plant to automatically adjust the speed of rotation on the drum based on the measured stack temperatures. As the stack temperature begins to cool down, the drum speed slows, thereby extending the RAP and aggregate drying time.

Derek Sanderson, general manager of asphalt construction and infrastructure for the GVA, says that these technologies have worked so well that Lafarge Canada is planning to install them at the company’s flagship Port Kells Asphalt Plant in Langley, B.C., where 50 per cent of the company’s total asphalt production volume in the GVA takes place.

Sanderson says the installation of the new drum and pug mill upgrades took between two and three months to complete and required a fair amount of planning. They were close to a $1-million investment.

“Financially, it’s a large investment; but we believed in the technologies. We didn’t have any government agencies involved at the time, so we had to get the financial executive to sign off on it,” he says.

With the Lafarge Canada’s latest investments at the Mitchell Island asphalt plant, Lafarge Canada the company is now produces mixes including with up to 50-per-cent RAP. Change like this has a big impact on construction in the region, says Sanderson.

“These are big savings on reducing the depletion of natural resources,” he says. “I think that Lafarge Canada in Western Canada are definitely the leaders in the development of asphalt and using recycled materials in asphalt.”

As it turns out, the sustainability aspect of the upgrades at the Mitchell Island asphalt plant did end up catching the attention of a government body: The City of Richmond.

Lafarge Canada has a long history working with the City of Richmond. The company had participated in the City of Richmond’s Carbon Market Pilot Program back in 2017. In that project, the City of Richmond had transferred 2,400 tonnes of carbon dioxide equivalent credits to Lafarge Canada, which were derived from the site’s asphalt recycling operations to the city to offset its own corporate GHG emissions for future years. Through the use of its high-percentage RAP production, Lafarge Canada ended up doubling that GHG reduction to approximately 5,000 tonnes.

In October 2020, Lafarge Canada and the City of Richmond embarked on another pilot project together. The city offered a section of 7000 Block of No. 5 Road in Richmond – a total of 3.2 total lane kilometres – to be paved with the company’s latest 40-per-cent RAP mix.

“For them to step up and make that move is a big step. It’s something new, and a lot of people tend to shy away from new, engineering-wise,” Sanderson says, adding that this project should help get more municipalities get on board in the future for specifying high-percentage RAP mixes in their road projects. “The City of Richmond is definitely a leader in the development of a circular economy – using recycled materials, finding a way to reuse them in building roads. They are a leader of the government agencies. The city stepped up and provided a road for us to pave. We stood behind our asphalt and gave them an extended warranty on it, alleviating some of their concerns. The project was a success.”

Lafarge Canada is no stranger to the use of RAP in its mixes. The company has worked with RAP in hot mix asphalt for more than 50 years.

“We’ve placed many RAP projects – gravel roads, parking lots – so we were extremely confident in its performance,” Sanderson says. “We provided high-RAP asphalt to the City of Richmond for their pathways, so their crews had experience with it… for this project, we just took it to the next level, and put it on a main street.” 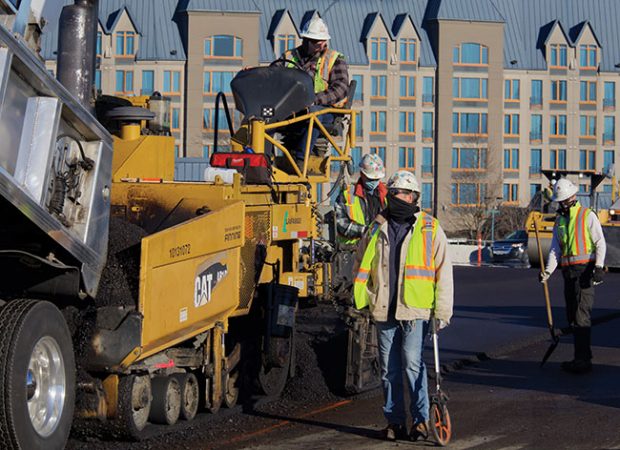 Lafarge Canada is no stranger to use of recycled asphalt pavement. The company has been using RAP in hot mix asphalt for more than
50 years. Photos courtesy of Lafarge Canada.

When using high percentages of RAP, ensuring the quality of the mix is vital for a successful project.

“We crush it, test it. There’s quite a bit of quality control. A lot of it comes from 50 years of producing,” Sanderson says. “We know we have to be very cognizant of the types of asphalt coming in – making sure it’s all high quality with proper gradation.”

The company’s labs and technicians are certified annually to perform quality control and assurance testing for aggregates, RAP, and asphalt mix designs by the Canadian Council of Certified Laboratories (CCIL). Lafarge Canada has two labs in the GVA, located in Langley and Richmond. As well, Lafarge’s AASHTO-accredited asphalt binder laboratory in Edmonton provides enhanced testing and quality control across Western Canada.

The main standards followed by Lafarge’s trained technicians are:

Lafarge Canada is currently in the process of obtaining an Environmental Product Declaration (EPD) for the products manufactured at its asphalt plants.

“The EPD program was developed in conformance with ISO14025, and establishes principles and procedures for developing an environmental declaration program that transparently describes the potential environmental impacts of the asphalts produced during stages of manufacturing. Each site will have a list of EPDs associated with all asphalt products, with verifiable and comparable information about the environmental performance of each product produced. The EPDs will allow decision makers to make informed comparisons among asphalt mixtures and ingredients,” the company stated.

“We’ve found that RAP is so successful that we really want to stand behind the sustainability of it,” says Sanderson. “It’s the way of the future towards sustainability, reducing greenhouse gases, and reducing the depletion of our natural resources.”