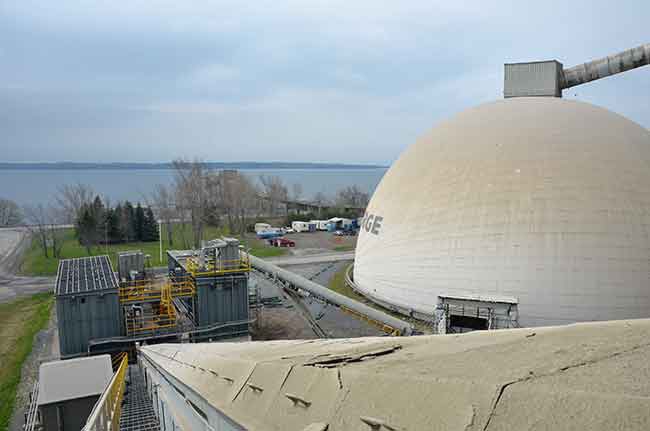 Cement production is one of Canada’s largest emitters of carbon into our air, thanks in part to its use of coal and petroleum coke to create the energy necessary for production. The average temperature at the fuel end of the kiln registers at 1,450F, equivalent to one-quarter of the temperature of the surface of the sun. Getting to that temperature requires a lot of fuel.

The benefit of running kilns at that temperature, however, is that any fuel with energy content can be used safely and efficiently in lieu of petroleum coke or coal.

Bearing that in mind, the cement industry has made a strong commitment to reducing carbon emissions by replacing fossil fuels with lower carbon fuels, and Lafarge is playing a leading role in this development.

Understanding low carbon fuels
Three years ago, the team at Lafarge Canada applied for permission to conduct a full-scale project under the Natural Resources Canada ecoENERGY Industrial Fuel Initiative Program. The project would allow the company to locate and demonstrate low carbon solutions. They initially teamed with Queen’s University in Kingston, along with WWF Canada and community stakeholders to understand how low carbon fuels could replace part or all of the supply of coal and petroleum coke currently used for energy production.

Low carbon fuels (LCF) are low in carbon for one of two reasons: they contain lower carbon chemistry or are considered to be biogenic carbon. An LCF containing a lower carbon chemistry means that the fuel releases less carbon dioxide for the same amount of energy produced. (measured in gigajoules). Biogenic carbon is carbon that is considered to form part of the natural carbon cycle. This is what wood combustion is considered as, since a new tree absorbs the carbon emitted when another is used, making it a carbon neutral process.

With support granted from Natural Resources Canada to move forward, Lafarge Canada began construction of the fuel handling system needed at its Bath, Ont. plant to begin using LCF. At the same time, Lafarge began working with its partners to develop the scope of the research program, including the different types of fuel that could be collected and tested.

For the new fuel handling system, the company looked to a compact footprint on the southwest corner of the property where they could develop a transloading facility. From there, trucks unload the fuel, which is then put through a shredding system to eliminate any lumps that may have formed in transit. The fuel is then conveyed to one of two storage bins, passing under a magnetics system that removes any metallic content. From the bins, the fuel is conveyed into the plant and to its final destination inside the kiln.

The first trial
With the fuel handling system in place, the company was able to conduct its first test in 2014. The test involved having a predicted lower carbon fuel replace 10 per cent of the coal/petroleum coke. The first trial included three different materials: railway ties, construction and demolition (C&D) waste  and asphalt shingles.

After the fuel was used, the emissions results were given to the team at Queen’s University to conduct a thorough statistical analysis. The result was that no increase in any emissions was found when using the fuels, and there was an over 80 percent carbon reduction for every tonne of coal/coke replaced.

The result was very positive for the company, putting them in a position to use the fuel on a permanent basis. In order to do so, they must apply to the government for permission, moving from compliance approvals on a three-year trial basis to a permanent approval. This must be done for each individual fuel that provides successful results.

A second trial was conducted in October of 2015, using  the same formula for fuel replacement but this time testing non-recyclable packaging, manufactured rejects, and non-recyclable commercial products such as carpets and K- Cups. Initial data showed similar results to the first trial and that all emission limits were met, however Queen’s University is still working on the full statistical analysis.

“It’s important for our employees, for us as a company, for our neighbours and for the environmental NGOs that we work with that there is not a trade-off here. We’re not trying to reduce carbon at the expense of some other pollutant. We’re trying to show that the fuels can be used safely and efficiently in our process. That’s one piece. But the other piece is a life cycle assessment.”

A life cycle assessment analyses the full environmental impact associated with a product from cradle to grave. It factors in all of the emissions created, and the types of emissions created, at all stages of the process. For the Bath plant, that means a comparison to the coal it is replacing, which is mined in Virginia, brought by barge to the Bath plant on the north shore of Lake Ontario, and grinding the coal for use in the kiln. Using the example of construction and demolition debris, there is the energy to sort the debris, truck the debris and shred the debris at the Lafarge site. However, the diversion from the landfill, where it would eventually rot and become methane, also must be considered in the analysis.

Challenging infrastructure
The introduction of the new fuels into Lafarge’s energy production system has its staff learning as the process unfolds. That goes for the fuel suppliers as well, being asked to change the way they approach their waste.

That challenge extends to building sustainable infrastructure for supplying LCF to Bath, which can’t be done as the company experiments with multiple types of fuel. That makes it cost-prohibitive for many fuel suppliers until someone like Lafarge is in a position to ask for consistent supply.

On the plant side, the challenge comes in the intake process. New processes for quality control, storage, moisture, logistics, safety and training have to be established at the plant for dealing with the new types of fuel versus what has already been established using coal and petroleum coke.

But the lessons already being learned have been shared with other Lafarge Canada facilities that are also experimenting with alternative fuels. In Nova Scotia, Lafarge’s Brookfield plant is working with Dalhousie University on tests using non-recyclable plastics, asphalt shingles and scrap tires.

Biomass alternatives
There are also experiments being done with a new type of fuel at the Richmond plant in B.C., one that just recently received national recognition thanks to work being done by Ontario Power Generation in Thunder Bay, Ont.

The fuel is known as torrefied or black pellets. The pellets are wood pellets that are pre-cooked to become a product that closely resembles charcoal’s textural and energy properties.

OPG Thunder Bay discovered just that during testing phases with the pellets, supplied by a company in Norway. OPG then converted its plant to the pellets at a minimal cost, using most of the equipment originally in coal-based energy production.

A few years ago, Vancouver-based Diacarbon Energy created the pellets at a pilot scale, providing them to Lafarge for testing as an LCF at the company’s Richmond plant with very good results. Now Diacarbon is scaling up the technology at its plant in Merritt, B.C. with hopes of producing consistent volumes by the end of 2016.

With the knowledge and expertise gained from the extensive experiments taking place across the country, Lafarge Canada is leading the charge to significantly reduce emissions in the cement industry.