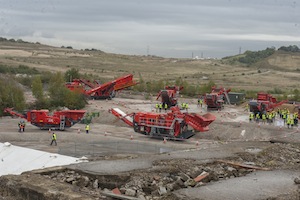 During the conference, held at the Tower Hotel, London,
delegates were introduced to the Terex Finlay business strategy and key focus
areas for growth in the next three years. Key to Terex Finlay growth and
expansion plans is an aggressive new product initiative and development
strategy, which will see the business double its current product range in the
same time period.

The product demonstration events were located at OCL
Regenerations, Dartford. OCL Regenerations are recognized as both experts and
leaders in providing sustainable material solutions in the South East and were
the perfect hosts during site preparations as well as during the two-day site
demonstrations.

The onsite demonstrations featured twenty recent product
launches and prototypes of Terex Finlay models due to be released during 2015.

There were three official new product launches to dealers
and end users at the conference;

The dual powered crushers are electrically driven allowing
users to run from electrical supply with the aim of giving significant savings
on energy costs. These machines are also fitted with an onboard gen-set
allowing the operator to move and use the machine where there is no electric
supply giving the flexibility and versatility of current standard models. These
machines join the 694+ dual powered inclined screener that was launched in
2013.

These product launches means that Terex Finlay can now offer
operators a full mobile crushing and screening train that can be powered from
mains electric and has the flexibility to run self-powered if required.  In applications where a full train is powered
by the on-board gen-set configuration the crushers generate sufficient energy
to enable the operator to run the 694+ dual power inclined screen for ‘free’
when used in conjunction with the J-1175 dual power jaw crusher.

The official launch of these three machines follows a
stringent and strenuous development cycle which has seen the machines tested
and proven in challenging and diverse product applications across Western
Europe.