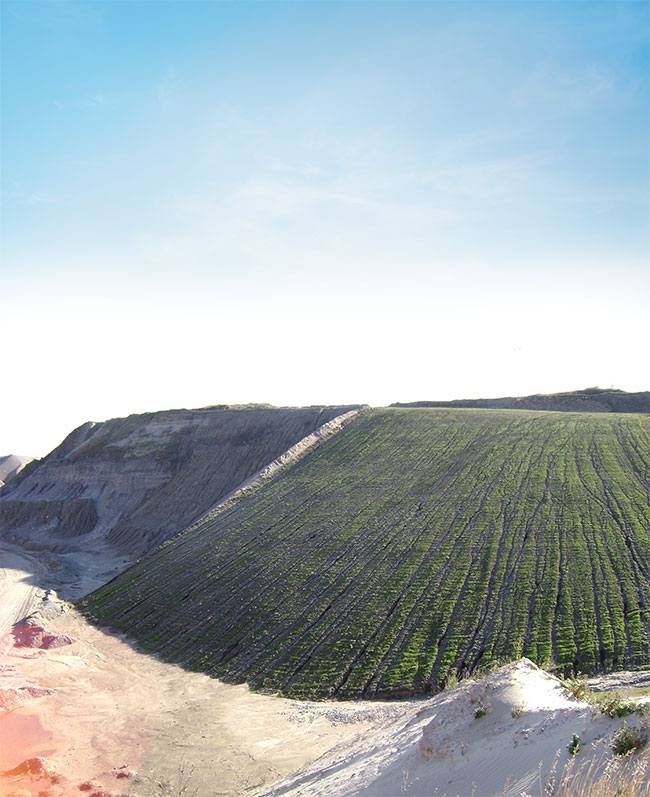 Erosion is a word that carries with it many negative connotations. It comes from the Latin erodere, which means “to gnaw away” – a good description for this powerful force of nature.

Aggregate producers have a rather complex relationship with erosion. On one hand, we provide some of the best tools for erosion control and protection, and our products do much to limit its impact. But we are still subject to erosion’s relentless force and its detrimental effect at aggregate sites. It can create many challenges for a site’s operation, particularly in terms of its impact on water quality. This can impact both active operations and rehabilitation efforts at the end of a site’s extraction period.

For most people, erosion is a familiar process. At its most basic, it is simply a mechanism that results in the transportation of soil or rock particles from one location to another. Wind, for instance, can be an important mechanism for particulate transport and the industry has a good history of dealing with dust issues. Most of the time, however, erosion is usually the result of water forces. Fine particulate, generated by erosion, can have serious impacts on water quality as well as the ecological function of water courses themselves. Rivers and streams naturally convey sediments – this  fine particulate transport can fluctuate over time and is influenced by geology, climate and terrain. Aquatic species living in streams have adapted to these cycles.

Excessive erosion, however, is more serious and far more than just an eyesore. Water that carries eroded particles from human activities will cause reduced water clarity and can impact water quality. Transported sediments in water can significantly alter streambed composition. Excessive sedimentation can impact the quality of habitat for aquatic species, which disrupts their lifecycles. For this reason, the Ministry of Environment Conservation and Parks sets limits to suspended solids in aggregate site discharges.

In the built world, erosion can diminish the carrying capacity of water courses. This inability to transport water efficiently then increases issues with flooding. A plugged culvert, for instance, conveys little water. Erosion and flooding at operating sites can damage access roads making them impassible. The damage can significantly complicate extraction and rehabilitation efforts.

Aggregate sites are particularly susceptible to erosion for a number of reasons. When vegetation is cleared ahead of extraction, it makes soil more vulnerable to erosion forces. Plant roots reinforce and act to bind the soil, and vegetation intercepts rainfall, which reduces the volume of runoff and slows its velocity. Plants also extract moisture from the soil, reducing the time the soil remains saturated making it less prone to erosion.

Secondly, erosion can be exacerbated by the tall slopes typical of many rehabilitated aggregate sites. Precipitation that falls on slopes can concentrate and gain velocity as it moves downhill. The erosive forces of this flowing water intensify with increased gradient and slope length. This often results in the formation of rills and gullies on rehabilitated slopes that don’t have adequate protection. These gullies are often deepest and widest near the base of the slope where water has reached its maximum velocity.

Thirdly, the quality of rehabilitated slopes can impact the severity of erosion. Fine particles left over from aggregate processing or from natural parts of the resource that are not marketable are commonly used for sloping at pits and quarries. Unlike engineered backfill used in construction projects, this fine material is often placed with less emphasis on compaction and slope construction. As a result, loose and fine-grained material, common at aggregate sites, is more sensitive to the forces of nature.

What can be done?
Aggregate producers in Ontario have a good record of employing practices to limit erosion. An option is to have facilities in place that slow water velocity,  improve retention times and encourage particulate settlement. In this way, aggregate producers can improve water quality and reduce the potential for erosion on and further downstream from their facilities. Attendees at OSSGA’s rehabilitation tours have seen a number of their colleagues address erosion challenges, including some in very difficult conditions. Below are examples of effective strategies that aggregate producers can follow.

Good planning goes a long way, and a rehabilitation plan needs to consider erosion from the start. For example, any time a producer modifies a drainage feature or alters the topography on a site, erosion and sedimentation protection should be considered. A good mining plan will limit the amount of time a stripped area is exposed and can significantly reduce erosion effects. Planting windows are also important in order to quickly establish vegetation. Scheduling extraction and rehabilitation needs to be an integral part of a well-designed mining plan.

The areal extent of exposed terrain is also critical. Unmitigated problems tied to erosion usually grow over time as rills and gullies from runoff become deeper and wider with every new storm. Producers need to keep erosion-prone areas limited in size and they need to quickly rehabilitate these areas. One of the best defences against erosion is to seed and encourage vegetation on slopes, and this vegetation can take time to establish.

To slow the velocity of runoff, the industry employs a number of different methodologies. In the Oak Ridges Moraine, where some of the tallest aggregate slopes in the province exist, it is common to “break up” slopes with short steps or terraces. Although these flattened areas make the slope longer or possibly steeper over short distances, they act to break up the flow of water and can redirect storm water to limit concentration. As a bonus, steps are particularly favourable for establishing vegetation, as seeded material is less likely to move downslope in flattened areas.

Directing runoff away from the top of slopes will often prevent the concentration of flow. Given that a deep excavation is often the nature of aggregate extraction, it is not always possible to direct overland flow away from slopes. Engineered diversion channels, however, can be installed in steep areas to direct water flow. These are often re-enforced with riprap or through some form of innovative engineering. Civil engineers have designed tools for erosion control in construction that provide separation, filtration, drainage and reinforcement. These include geotextiles, walls, mats or the placement of specialty aggregates. These solutions are sometimes used in particularly problematic areas at aggregate sites – the Herber Down site in Durham County is a good example.

Understanding that erosion is a natural process, some erosion is unavoidable.  The goal for operators is not to eliminate all erosion but to control problems and to find solutions to site specific needs. Planning ahead to address erosion concerns and choosing the right erosion-control methods are critical. During an aggregate site’s active operation, inspection and maintenance of storm water and erosion control facilities should be part of routine work.

This article first appeared in the Winter 2019 issue of Avenues.