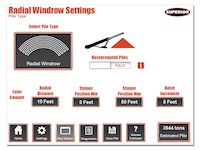 May 14, 2015 – Superior Industries, Inc. released version 12.0 of its telescoping radial stacker automation program. While the updated program does not affect the physical function of the machine, the appearance of the software received a major makeover.

According to the company, TeleStacker Conveyors dating all the way back to 1997 can be upgraded; however, existing owners should contact their Superior dealers for more information.

Superior Industries engineered and manufactured its first TeleStacker Conveyor back in 1997.