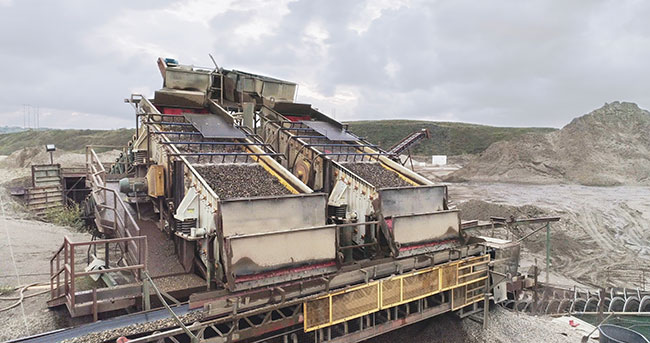 Any long-running producer will tell you that constantly striving to increase efficiencies is key to surviving and thriving in the world of aggregate production. Nels Ostero Sand & Gravel is no different.

The third-generation producer has been supplying the Peace Region of British Columbia for 55 years. The majority of the aggregate produced by the Taylor, B.C.-based company is supplied to local road builders and residential contractors between Fort St. John and Dawson Creek, as well as being used in concrete applications, asphalt plants and oilfields. The company was founded in 1966 by Nels Ostero and was later taken over by his son, Tom Ostero, in 1982. In 2007, Nilson Ostero, Nels’ grandson, took over managing the operation and continues to oversee the operation today.

Nels Ostero Sand & Gravel is also a leading supplier of concrete aggregate and has a hauling fleet comprised of tandem and tridem trucks and tridem and quad trailers that deliver to job sites throughout the region. The company has annual production that typically ranges from 250,000 to 300,000 tonnes of concrete aggregates sold, and approximately 1 million metric tonnes of aggregate processed in total. The company produces a wide variety of products ranging in size from 1/4” to 16”. To produce all of that aggregate, the company relies on 11 vibrating screens, two crushers and dozens of loaders, trucks and excavators on-site. Ensuring all of that equipment is running efficiently to minimize downtime is vital.

A long history
In business, relationships are everything. And Nels Ostero Sand & Gravel has had a long-running history with one equipment manufacturer in particular, Haver & Boecker Niagara. The producer first purchased equipment from Haver & Boecker in 1966, when the company installed a Ty-Rock, known today as an F-Class vibrating screen. Over the last 55 years, Nels Ostero Sand & Gravel has continued to work with the manufacturer, and most recently purchased a new wash plant equipped with two 7’ x 6’ Niagara T-Class machines in 2017.

“The T-Class machines are on their third season with us, and we haven’t had a single issue,” Nilson says. “They allow us 20-per-cent more capacity than our old screens, but more importantly, they are stronger and more reliable.”

Unlike some producers operating in northern regions of Western Canada, Nels Ostero Sand & Gravel produce year-round (with the exception of the company’s washing operation, which will shut down when temperatures steadily reach -3C). With the cold, unforgiving winter weather that comes with operating in Taylor, B.C. – more than 1,200 kilometres away from the mild Vancouver temperatures – having durable, hardy equipment is a no-brainer. 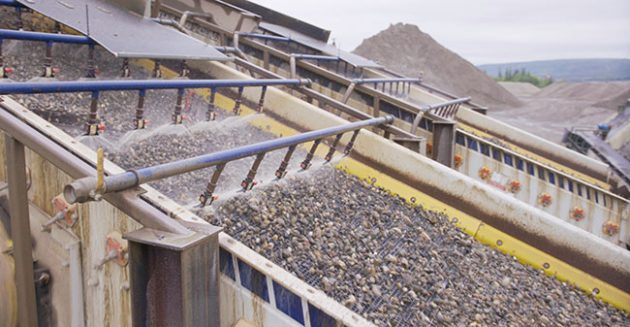 Managing maintenance
One area where the company was struggling was with wear life of its screen media. The screen media required change-outs every two weeks and required maintenance every eight shifts. To solve this issue, the producer reached out to Haver & Boecker Niagara to look for some solutions, and the company recommended its PROdeck method, which evaluates the screening process to effectively blend screen media for the highest production with the least amount of unscheduled downtime.

“Haver & Boecker Niagara partners with each customer and thoroughly evaluates an operation before making recommendations,” Kopper said. “For Nels Ostero Ltd., they were able to achieve a 70-per-cent increase in wear life with our PROdeck approach.”

Nilson also consulted with Haver & Boecker Niagara to find ways to reduce its downtime for maintenance and screen change-outs. The manufacturer recommended its Ty-Rail quick-tensioning system, which are are equipped on Nilson’s T-Class machines. The Ty-Rail system combines the tension rail and all hardware together in one assembly.

“A complete screen change-out, on one screen, would have normally taken us five or six hours,” Nilson says. “But with Ty-Rail, we can do it in as few as three hours. And guys aren’t dropping bolts every 15 seconds, so that’s an added bonus.”

Nilson also enhanced his T-Class machines by adding Zip-Guard, a 1/2-inch-thick polyurethane liner designed to reduce the impact of passing material by protecting the cross beams from wear. In addition to all of the new equipment, Nilson also likes that Haver & Boecker Niagara begins every service visit with its Pulse vibration analysis, designed to help customers examine the health of their vibrating screen. Haver & Boecker Niagara technicians use the technology and analysis to help detect irregularities that could translate into diminished performance, decreased efficiency, increased operating costs and imminent breakdowns.

“Markus and his team used Pulse to help me spot issues that our team wouldn’t have normally been able to find,” Nilson says. “Haver & Boecker Niagara first ran it on my machines right after they installed them, and now they run it once a year. It has caught problems that may have cost me money down the road, including a twisted frame on one of my screens. We knew there was a problem with the unit, but with Pulse, Haver & Boecker Niagara’s service technician determined exactly what was wrong.”

Nilson believes that having top-performing, reliable equipment is not only key to keeping the operation running smoothly, but also for employee retention.

“At the end of the day, if the guys are working with good equipment, they are happier and perform better,” Nilson says. “Safety is obviously a big deal, but another thing is providing efficient, top-notch machines that don’t require unnecessary maintenance.”