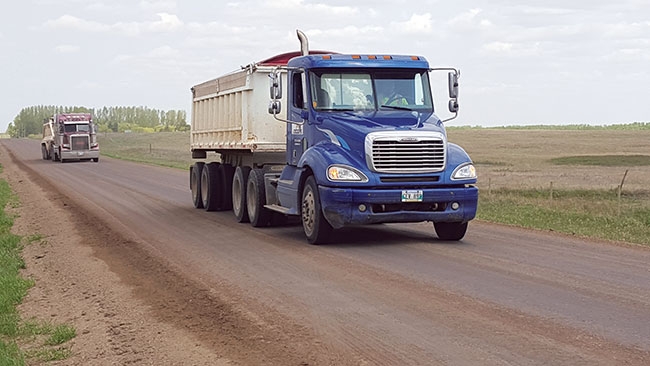 A one-mile test section of Curries Landing Road in the Rural Municipality of Cornwallis near Brandon, Man., is used by 150 loaded gravel trucks daily. It was built in 2015 using the EarthZyme technology and now needs less maintenance. Photos courtesy of Hamid Mumin.

In northern Canada, there are many unpaved aggregate and clay-based roads that suffer from rutting, pot-holing, heaving and washboarding.

Trucks driven on them are usually accompanied by pervasive, environmentally-unfriendly dust clouds that result in loss of material from the surface.

The final outcome most often is a costly cycle of road deterioration, ongoing maintenance, blading, addition of new aggregate and repeated applications of chloride products – which are corrosive to vehicles and toxic to waterways and vegetation – but are necessary to suppress the dust.

There is some hope, though.

A team of researchers at Brandon University in Manitoba has determined that EarthZyme, a natural, bio-degradable soil stabilizer created by Cypher Environmental, causes the road material to densify and the clay materials to bind strongly, resulting in a stronger road without toxic chemicals.

Further, researchers found, to their surprise, that the added product also retains a level of plasticity that makes the road less likely than cement or asphalt to crack or break. And, if the surface does crack, they found that the product enables it to self-heal due to its inherent properties.

“This research is important because it solves a number of ongoing and immediate needs related to the vast network and millions of kilometres of unpaved roads in Canada,” explained Hamid Mumin, a professional engineer and professor of geology at Brandon University, who led a team of students and research assistants that conducted a test of the product over a five-year period.

However, after testing the product on a series of gravel roads in the rural municipality of Cornwallis just east of Brandon, Mumin and his team concluded that EarthZyme caused the road material to bind more strongly, resulting in thoroughfares that ended up being more durable.

“None of the roads in the Brandon area have experienced any negative effects from repeated freezing and thawing cycles,” said Mumin. “Brandon has one of the most extreme climates in Canada, with summer heat and winter cold, and so far this has not caused any noticeable road damage.”

The team also found that cracks that may appear during the initial 30-day curing phase will quickly seal up and rebind without any noticeable damage to the road and that, after that, cracking is rare.

In the study, test roads were built and the stabilization product was sprayed onto the material and monitored for strength, surface wear, durability, dust production and general driving condition.

A one-mile test section of Curries Landing Road in the Rural Municipality of Cornwallis near Brandon, Man., is used by 150 loaded gravel trucks daily. It was built in 2015 using the EarthZyme technology and now needs less maintenance.

When EarthZyme is applied, clay particles in the soil are no longer attracted to water, which means water in the soil drains away freely, resulting in the clay and soil particles settling closer together and making the road more stable. The product uses the clay in the soil as a binder, not the product itself.

Many other soil stabilization products glue the soil together and once that glue is gone so are the results. With the addition of catalysts and polymeric agents, EarthZyme manipulates the natural properties of the clay, causing them to act like a cementing agent, providing for lasting soil stabilization.

Researchers found that the strength and durability of the final road depends on factors such as a good aggregate mix, the appropriate type and amount of reactive clay and binding catalyst, proper construction protocols, and testing and monitoring of materials and construction procedures.

When the requirements are met, the researchers concluded, the result is an excellent and durable road.

Mumin said he and his team were very surprised at the results.

“The roads are stronger and more durable than expected, and the self-healing aspects were completely unexpected,” he said.

Mumin said when the project started it was not clear what would happen. He did expect to see frost heave damage in the spring, but even that has not occurred.

“Our original hope was that the roads would last for about five years before a product re-application was required. However, we are now into the fifth year and the original roads are still as good as when built. We don’t yet know how long they will last, but it looks great at this point,” he said.

Teaghan Wellman, vice-president of research and development at Cypher, said the research has, and will continue to enhance, the understanding of the application and bonding properties of EarthZyme with clay-rich aggregates to engineer road materials using materials available globally.

“The objective of this continued research is to provide a cost-effective solution to the ongoing problems experienced in unpaved road stabilization through the elimination of environmental and safety concerns, using inexpensive local materials, and environmentally-friendly stabilizers such as EarthZyme as well as constructing strong, durable roads that require little to no maintenance.

“The project is of direct benefit to rural and northern Manitoba but can also be applied to foster a global impact,” she said.

Wellman said the test roads constructed in the Brandon region have been extremely successful at nearly eliminating the negative environmental impacts of unpaved roads, dramatically improving their durability and performance, and for heavy use, high-volume traffic.

Wellman said the project is receiving significant municipal, provincial, and international recognition, and many municipal-corporate linkages and partnerships have been developed.

Industry and government delegations have come from China, Honduras, India, Alberta and other areas of Manitoba to examine the test roads.

Prof. Mumin, meanwhile, said there is an immediate use for the technology in many mining, quarry and heavy traffic applications where significant cost savings can be realized but there is still a lot of work to be done to determine which clays and aggregate types and composite mixtures work best.

“I believe we are still only scratching the surface of the potential for this type of road construction and stabilization,” he said. “I look forward to working closely with government infrastructure agencies on solving some of their major road stabilization problems.”