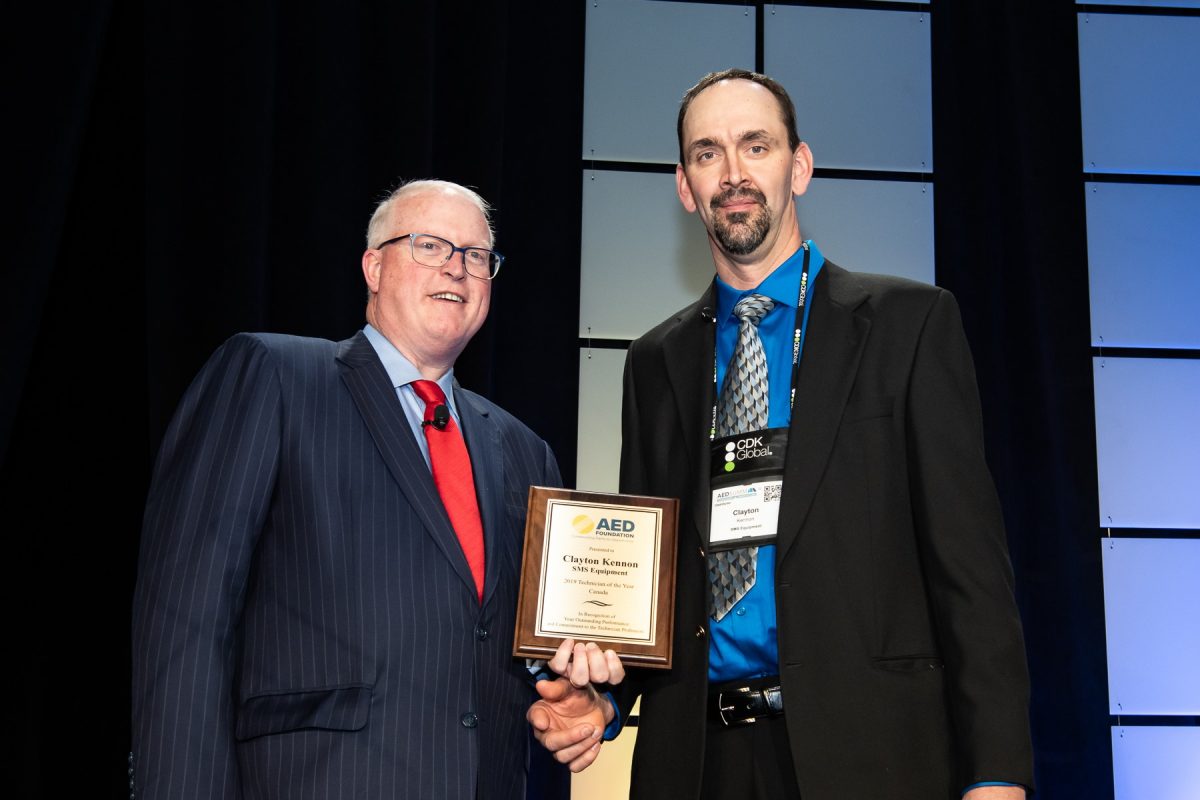 “The AED Foundation is excited to honour technicians, like Clayton, for their hard work and passion to the equipment industry through our Technicians of the Year Awards,” said Jason Blake, executive vice president and COO of The AED Foundation. “We would like to thank SMS Equipment for participating in our inaugural award, and we look forward to growing this recognition moving forward.”

“Clayton is a leader, mentor, and go-to guy for our technicians,” says Larry Gouthro, general manager, SMS Equipment. “He takes new employees under his wing and starts them off in the right direction. He makes them feel like part of the team. We can always rely on Clayton in a tough situation or tight deadline to pull through. His dedication is contagious.”

In addition to his mentoring of up-and-coming technicians, Kennon was nominated for his hard work and dedication that contributed to the success of his department, most significantly, the organization and planning of the parts for new builds. 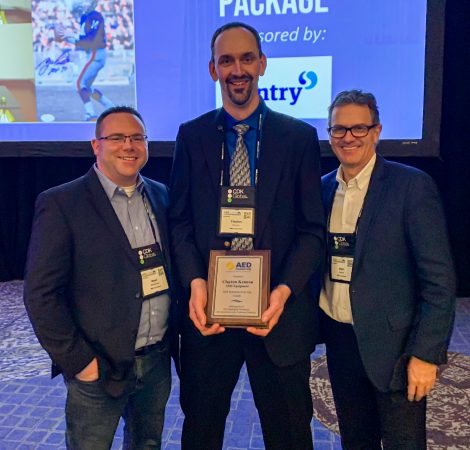 “The time and effort put in by Clayton on a project building over one hundred trucks increased our production time. He observed the struggles the other crews had when it came to putting kits together for the welding department, and came up with a checklist with pictures, complete with sign off, to assist with this shortfall. Without this extra effort, it would have been challenging to meet our deadlines directly following the Fort McMurray fire. Whenever there is a major technical issue, Clayton is actively involved,” said Ryan Medendorp, superintendent of trucks and facilities.

The 22-year veteran equipment technician spends most of his time servicing heavy equipment between Fort McMurray, Alberta and northern Saskatchewan. His hard work and dedication to getting the job done right started at a young age. Kennon grew up on a family farm in rural Saskatchewan, Canada, and credits the work ethic he learned from his parents to receiving this award.

“Growing up on the farm, you never quit until the job was done,” he says. “So, seeing my parents work that way, it just came naturally.”

After graduating high school in 1997, Kennon worked as an apprentice until 2000. He received his Journeyman Agriculture ticket in 2001 and went on to challenge the heavy-duty ticket in the fall of 2007 before joining SMS Equipment in December 2007. The veteran heavy equipment technician’s passion for learning has never stopped. As an SMS Equipment Advanced Certified Technician, Kennon is continuously learning about the latest equipment and technologies.

“Every time there is a new truck that comes out, they put me into the courses,” he says. “I teach people as they come up.”

In addition to providing Kennon with more tools to train upcoming SMS Equipment technicians, the courses he takes allow him to have a better understanding of the equipment he services – a vital investment in the rapidly-changing world of heavy equipment.

“The biggest challenge in the tech trade is everything changing all the time,” Kennon says. “More and more of the tech tools are on a computer. The first thing you do is hook up a laptop or scan tool and it tells you where to start.”

Kennon really enjoys the challenges of his role, trying to troubleshoot a problem and the satisfaction of seeing it fixed. He recommends his career path for anyone who likes getting their hands dirty and figuring out how things work.

“I find it’s a lot like being a doctor,” he says. “The machine comes in broke, you figure out what’s wrong, do the repairs, and have the satisfaction of it driving away – and you don’t have to be on call, like a doctor.”

When it comes to the constantly growing market for autonomous vehicles, Kennon doesn’t just use his expertise for servicing them.

To learn more about what makes SMS Equipment’s service stand out above the crowd, visit www.smsequipment.com